The rumored Xiaomi 13 Lite made a stop on the Google Play Console database which revealed its design and some key specs. The device is codenamed Ziyi which matches the Xiaomi Civi 2 and the linked image also looks identical to the Civi 2. 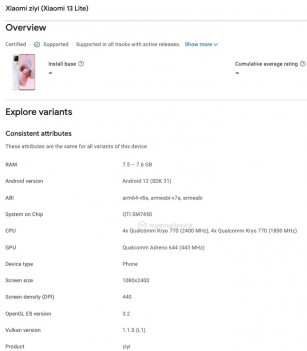 The rest of the specs on the GPC listing confirm a 1080 x 2400px screen resolution, the Snapdragon 7 Gen 1 chip chipset alongside 8 GB RAM. The software side is covered by Android 12. Previous rumors suggest Xiaomi will also release a Xiaomi 12 Lite 5G NE (new edition) which is expected to be identical to the Civi 2 and the upcoming Xiaomi 13 Lite.