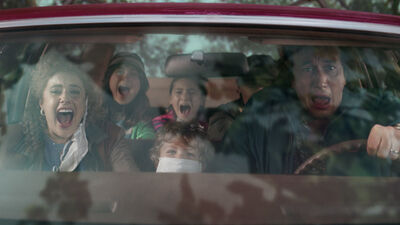 
Without spoiling the final act completely, it re-centers the Gladneys back at home, but with death a much more present reality in Jack’s mind. Unfortunately, as the intensity rises, “White Noise” loses some of its impact, especially in a few talky scenes near the end that betray the tone of the first half. Yes, the film always deals with “serious” subjects, but it gets rocky when they take center stage, and the tone struggles to merge satire and marital drama. DeLillo’s book was notoriously called “unfilmable” for decades, and it feels like this last act is where that’s most apparent.

Thankfully, Baumbach has two of his most reliable collaborators to keep it from going off the rails. Driver is, once again, excellent here, crafting a performance that is often very funny without relying on broad character beats. There’s a version of this character that’s pitched to eleven—the awkward academic forced into trying to keep his family alive despite his inferior skill set—but Driver gives a performance that’s often very subtle even as everything around him is going broad. Gerwig is a little oddly mannered early in the film, but that makes sense for a character who becomes somewhat unmoored before the air around her becomes toxic.

To unpack this epic of existential dread, Baumbach has assembled a team that deserves mention. Cinematographer Lol Crawley (“Vox Lux“) finds the right balance between realism and parody in his camera work, giving much of the film an exaggerated look amplified by Jess Gonchor’s ace production design. The A&P here, with its bright colors and shelves of identical items, is not quite reality, but it’s close enough to make its point, and the chaotic sequences of panic in the mid-section have the energy of a CGI blockbuster. Finally, Danny Elfman’s score is one of the best of the year, connecting the three tonally different sections.

What does it all mean? Why do we take pills, buy junk, and watch car crashes to escape our fears? The phenomenal A&P dance sequence that ends “White Noise” lands a key theme in a fascinating way—we may all just be buying colorful stuff we don’t need to distract ourselves from reality, but let’s at least try to have fun while we’re doing it.

In limited theatrical release now. On Netflix on December 30th.