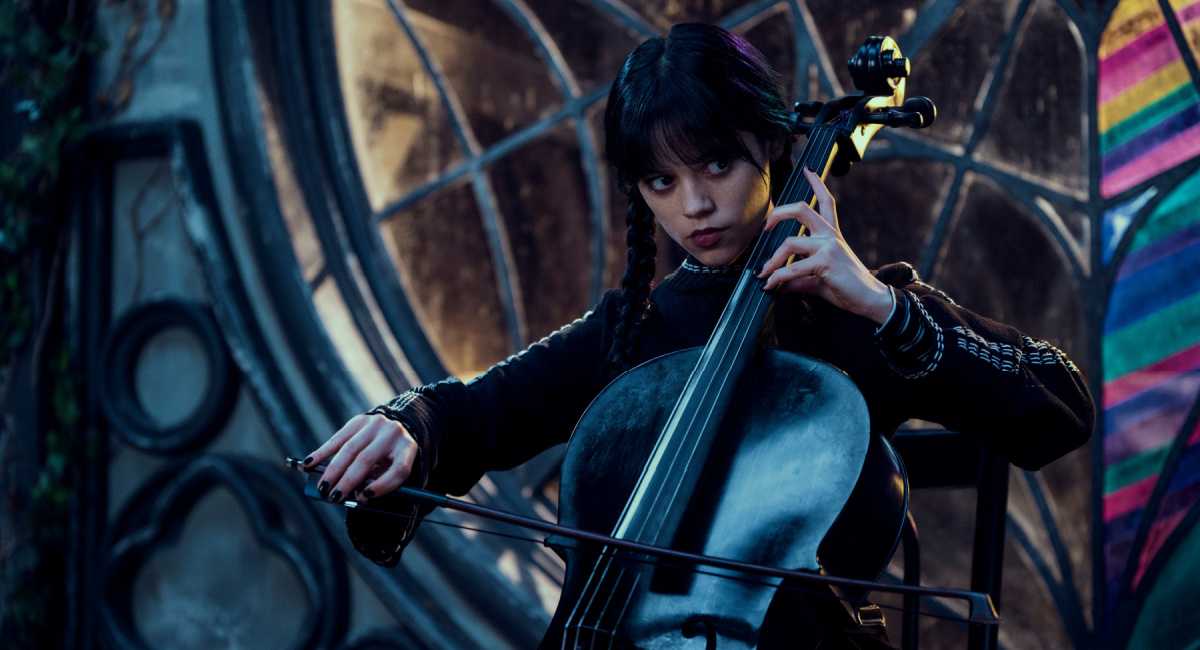 Now showing on Netflix, ‘Wednesday’ represents the latest attempt to bring ‘The Addams Family’ to screens, and one that succeeds partly because of its star.

The Addams Family, which originated with Charles Addams’ single-panel cartoons and strips in the 1930s and 1940s, have long since been adapted in different formats, including TV series, a successful pair of movies and animated films.

Now comes ‘Wednesday’, which, rather than featuring the entire family (though they’re there at the start and in a key episode midway through), focuses instead on their eldest child.

Jenna Ortega stars as Wednesday, here presented in traditionally dark clothing and darker moods, more likely to be found studying autopsies that on social media like her classmates. 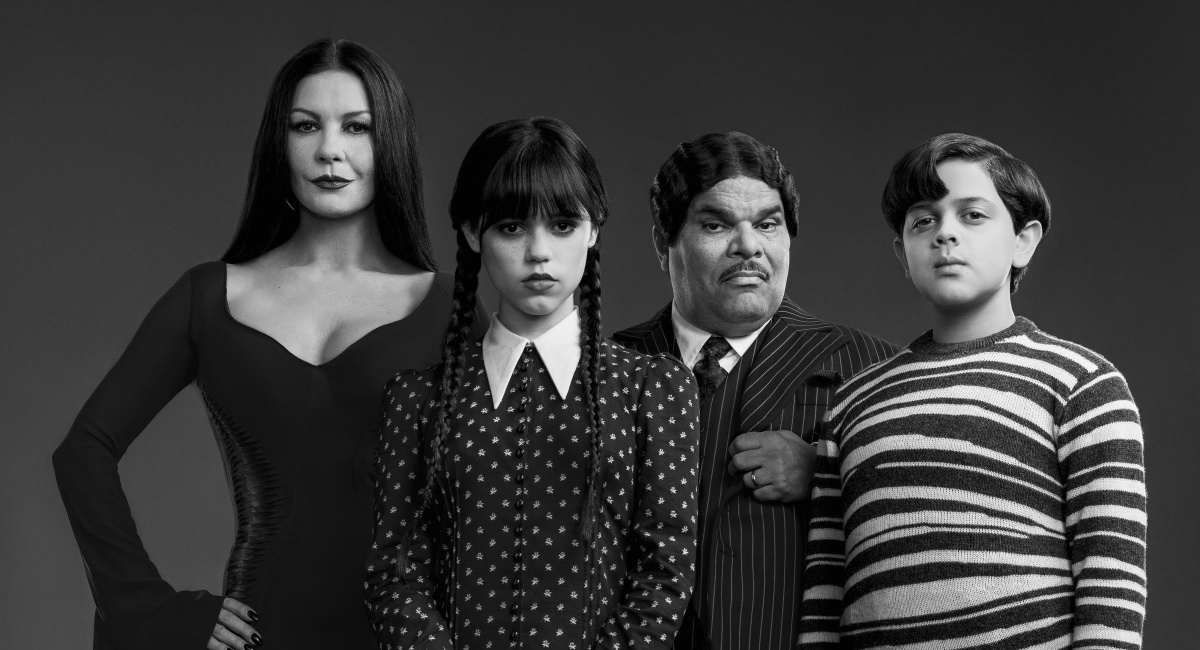 As the show opens, she’s been kicked out of her latest school for punishing the water polo bullies who picked on her brother Pugsley (Isaac Ordonez) by releasing piranhas in their pool.

Despairing of finding a place where she might actually fit in, her parents––stylish, vampy Morticia (Catherine Zeta-Jones) and squat, smooth Gomez (Luis Guzmán)––sign her up for Nevermore Academy, where they studied.

It’s seemingly perfect for her: a place for outcasts, creatures (such as werewolves and sirens) and those who society considers unusual to flourish with their peers. Yet even here, Wednesday feels like an outsider, initially unwilling to engage with the usual school activities outside of attending class.

Her roommate, Enid (Emma Myers), a werewolf with her own family issues, is perky and friendly, and at first gets on Wednesday’s last nerve. Then there’s Principal Larissa Weems (Gwendoline Christie), a former classmate of Morticia and Gomez, who still bears a grudge against them for some mysterious reason (it won’t surprise you that this gets explored during the season). 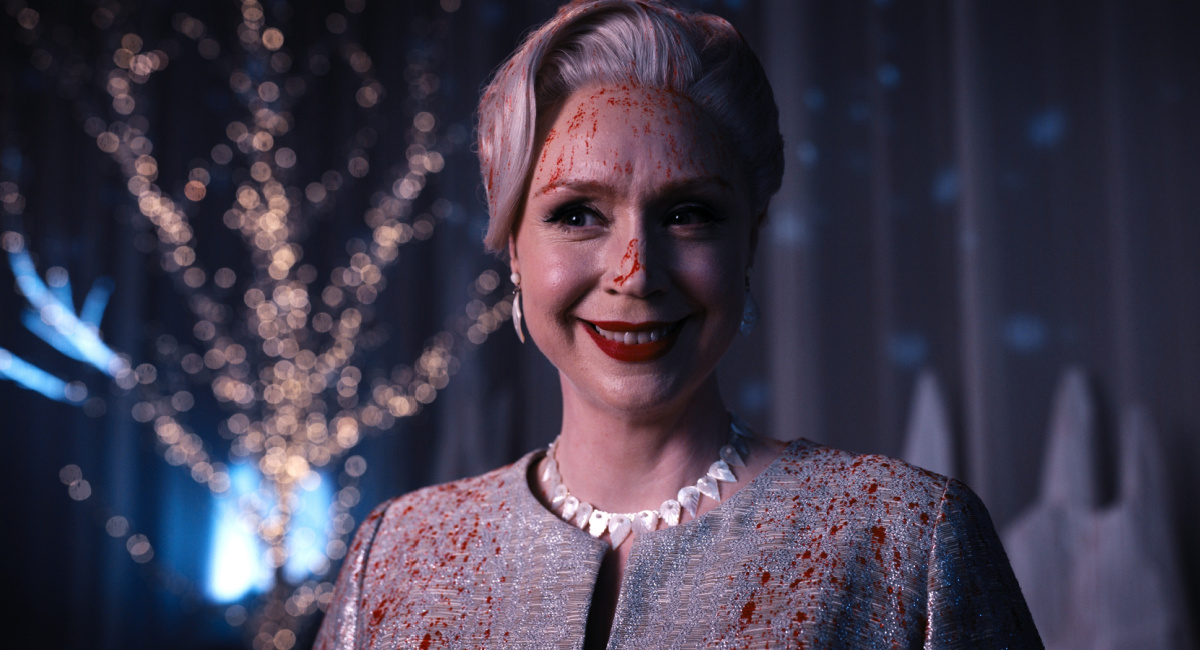 As she tries to make the best of it, slowly forming an unexpected social circle that shifts and warps in relatively traditional young adult fictional ways, Wednesday copes with the help of family aide Thing, a disembodied hand (played, with an effects assist, by Victor Dorobantu) bursting with personality who can say more with the flick of a finger than some can with a monologue.

And Nevermore has its own challenges beyond the usual cliques and classes––there’s a strange creature lurking around and pupils are disappearing and a dark history to the local town that Wednesday’s burgeoning psychic powers will unlock.

Created for TV by ‘Smallville’ veterans Miles Millar and Alfred Gough, this show also boasts the talents of Tim Burton, who would seem to be a natural fit for the ‘Addams’ style (he was actually offered the first movie but passed). And so it proves.

With sparky, entertaining scripts and suitably gothic production design, ‘Wednesday’ proves to be a winner, full of imagination and ideas that put it ahead of the game for its genre. 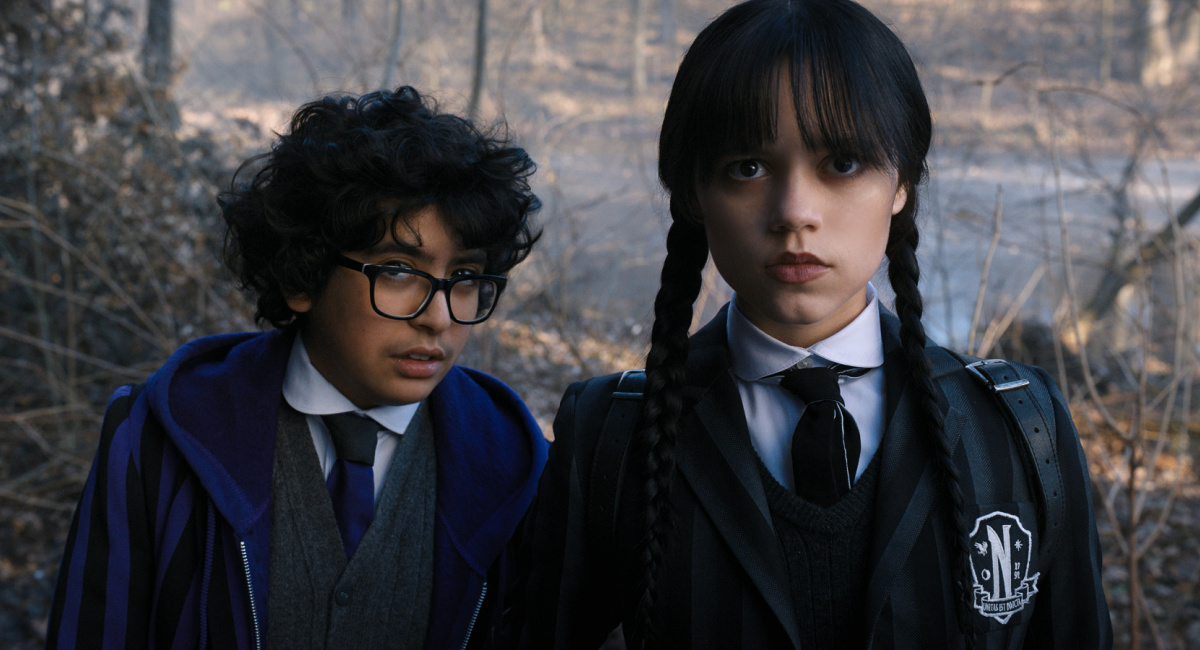 (L to R) Moosa Mostafa as Eugene Otinger, and Jenna Ortega as Wednesday Addams in ‘Wednesday.’ Photo Courtesy of Netflix © 2022.

Though Burton is usually found putting his unique stamp on projects, here he resists that urge––it’s not missing entirely, but it’s certainly toned down. Call it just enough to help the show have a specific look.

Yet perhaps the main reason this succeeds the way it does is Ortega, who brings a dark vitality to the role. She completely owns the character, finding new layers (aided by the scripts and the show’s push to explore why she is who she is) to someone that we’ve seen before.

That’s no easy task considering that the cast also boasts Christina Ricci, whose Wednesday in 1991’s ‘The Addams Family’ and 1993’s ‘Addams Family Values’ is still considered the gold standard. Ortega never feels like she’s channelling Ricci, but their Wednesdays are complementary, springing from the same source.

Delivering certain lines as though they’re dripping with poison, and yet finding the humanity too, Ortega’s is an awards-worthy performance and more proof that she’s a rising star to watch. 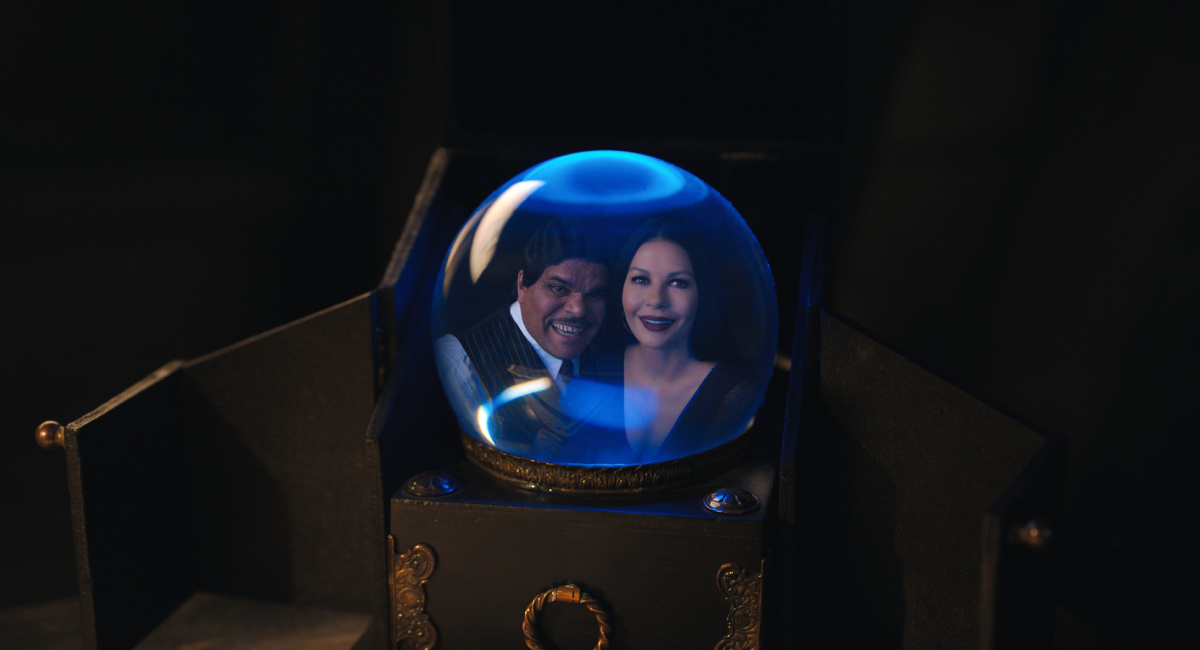 (L to R) Luis Guzmán as Gomez Addams, and Catherine Zeta-Jones as Morticia Adams in ‘Wednesday.’ Photo Courtesy of Netflix © 2022.

Outside of Ortega, ‘Game of Thrones’ Christie puts in a solid performance as Weems, who is none too happy to have another Addams at the school. As for the family themselves, Zeta-Jones and Guzmán (whose Gomez is actually closer in design to the original cartoon strips than the movies’) do a lot with the little they’re given––because, after all, the show isn’t called ‘The Addams Family’. It’s fun to see them on screen, and the parents do pop in the episode focused on their past with Nevermore.

Myers’ Enid plays well off of Ortega, bringing extra joy to the screen whenever she graces it, while enthusiastic early friend Eugene (Moosa Mostafa) is also a fun addition.

Plus, while the character is usually a throwaway gag in scenes, Thing here has more of a part to play, serving as a confidante for Wednesday, while also sending intel back to the family. He’s brought to life in such a way as to totally seem real––he’s practically a magic trick, which makes sense since hand-actor Dorobantu is a magician in real life.

And, while he shows up later in the show, Uncle Fester (Fred Armisen) is also entertaining, though sometimes perhaps too much of Armisen creeps through at times. 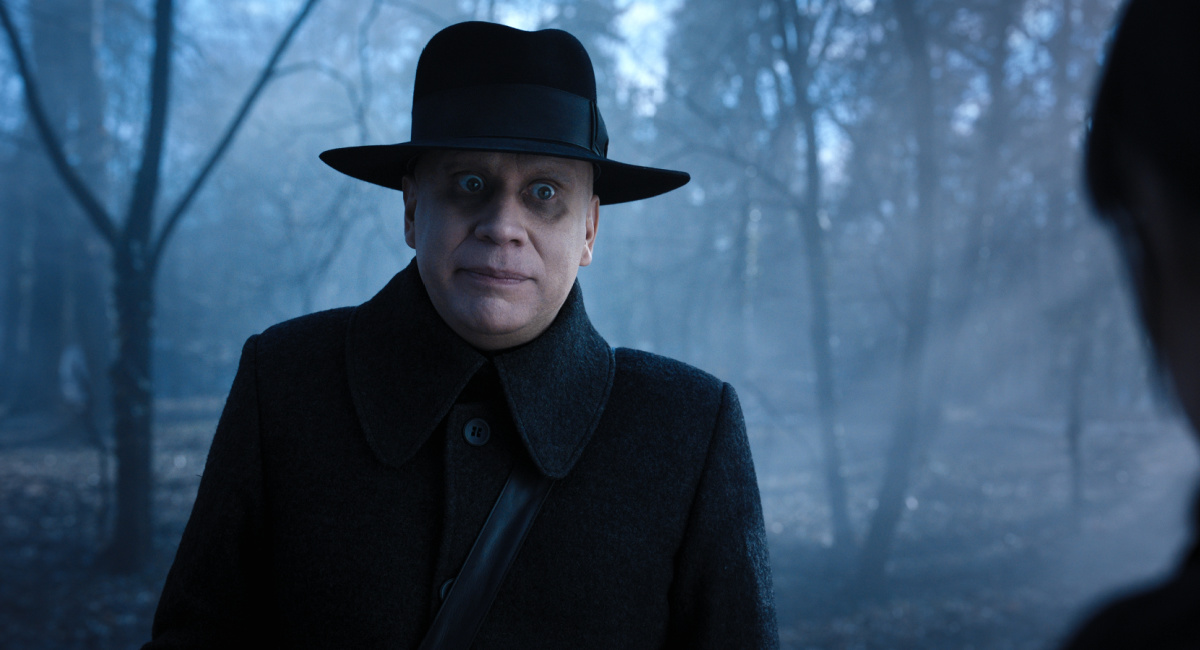 The male contingent of the school makes less of an impact, blandly filling their part of the story and the show does sometimes fall into the pitfalls of the YA genre, with less-than-thrilling romantic subplots and a few stock characters. But thanks to Ortega and her castmates’ commitment, ‘Wednesday’ still works.

The show has been a big hit for Netflix––both in terms of viewers and viral content––and it’s not hard to see why. Season 2 would be a welcome surprise, as there’s plenty of story left to be told.

‘Wednesday’ receives 4 out of 5 stars. 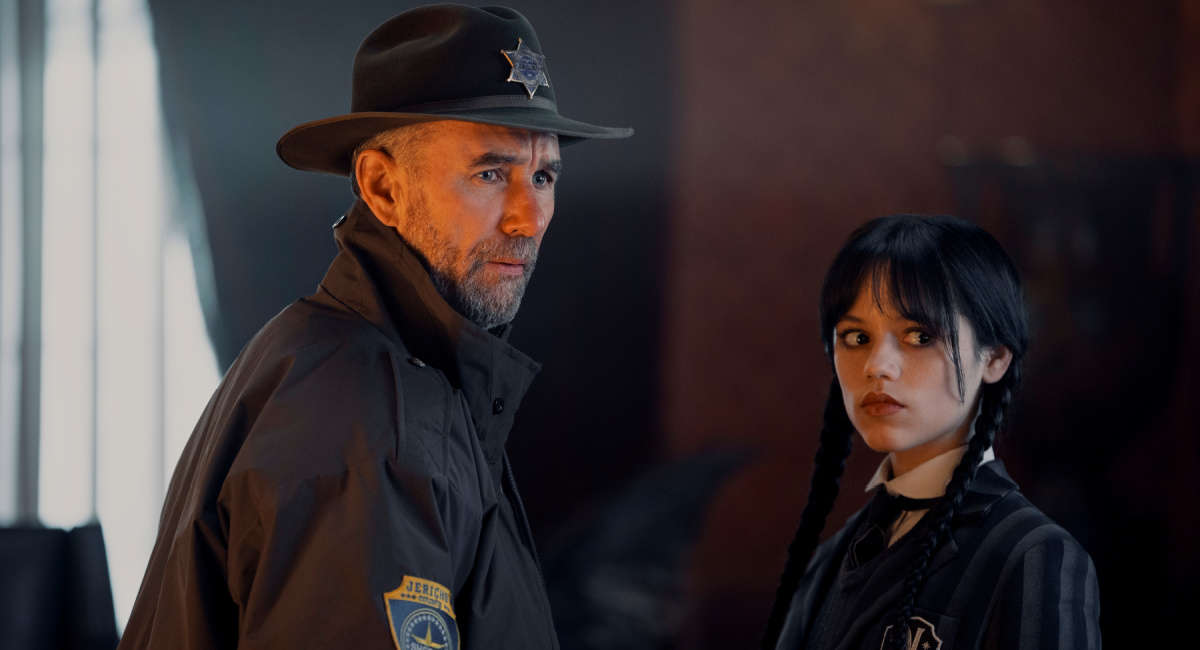