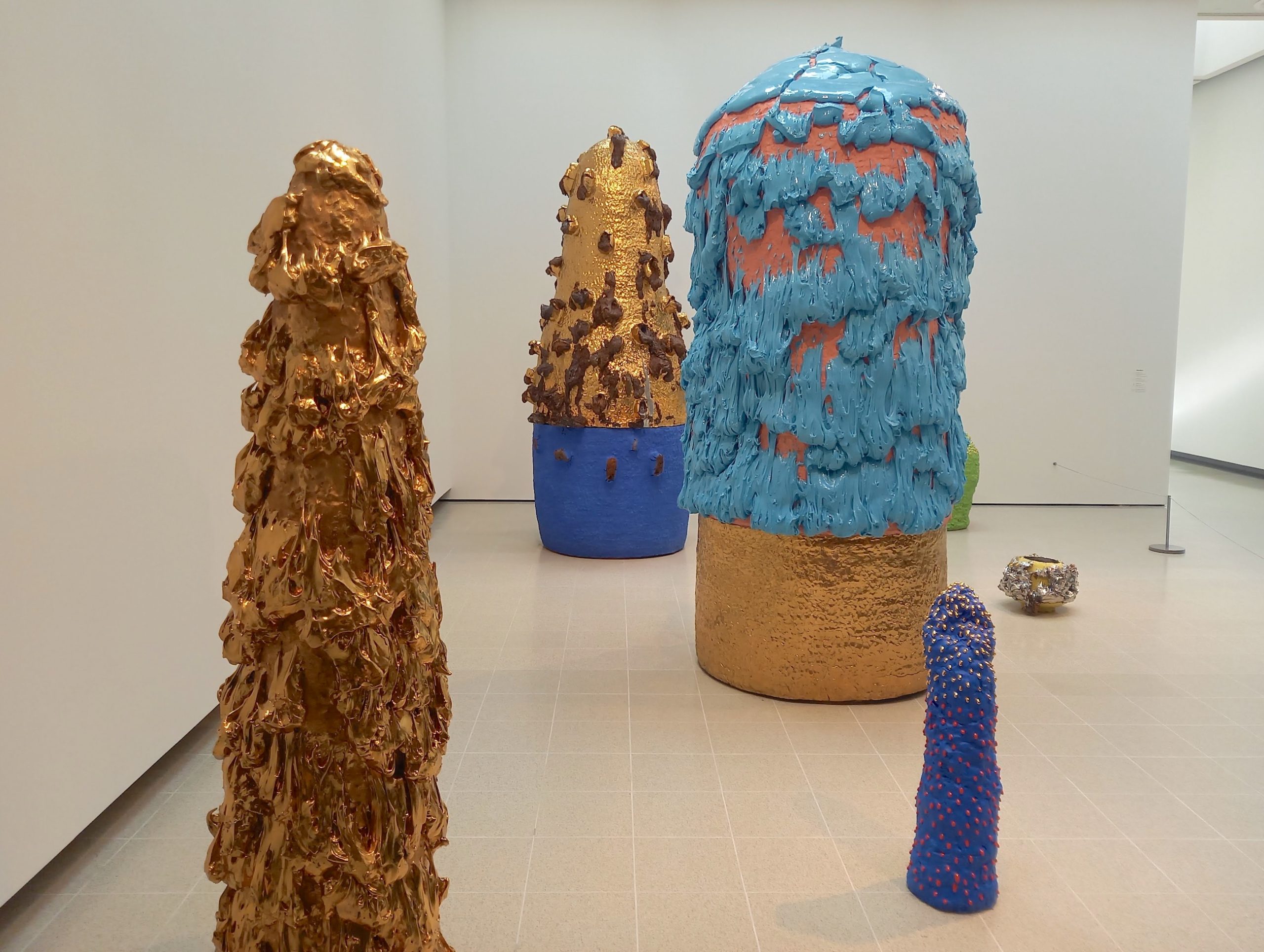 
LONDON — Strange Clay: Ceramics in Contemporary Art is a bold move by the Hayward Gallery: many will remember the shock at Grayson Perry’s Turner Prize win in 2003, entering the (then) most cutting edge contemporary competition with this most underused, humble medium. And yet of the 23 international artists on view, he and the show’s other best known ceramicist, Edmund de Waal, are arguably the least compelling — demonstrating that curator Dr. Cliff Lauson has gone all out for high visual impact in his other selection. He’s brought together artists from all over the globe and works that span a range of topics, from “architecture to social justice, the body, the domestic, the political and the organic,” according to its press release. How, then, from a curatorial perspective, can the show make cohesive sense, for the audience to better grasp the discipline and its recent history? The answer is, through pieces so proudly disparate, tactile, and wondrously defiant of categorization that it doesn’t matter. Instead, an introductory caption declares the unifying theme of the artists’ “[shared passion] for the intensely tactile, physical processes of shaping and working with clay.” The Hayward Gallery itself is blessed with unforgiving, brutalist concrete spaces that lend themselves to large-scale, unconventional installations; its monotone gray and hard surfaces provide an excellent setting for the exhibition’s otherworldly, sometimes exploding forms, and it makes for an exciting visit indeed.

This focus on visual impact and inclusivity should make the show accessible and compelling for general audiences, but also — perhaps unexpectedly — it may appeal to art historians in terms of how contemporary artists are pushing the technical boundaries of the medium. At times it feels almost as if ceramics as a medium transcends itself and indeed Lauson speaks of its “otherworldliness.” Little wonder that the Hayward has chosen Takuro Kuwata’s 2016 installation of untitled works for its promotional imagery. Though purportedly inspired by traditional bowls used in Japanese tea ceremonies, these monumental, molten protrusions of zingy color and metallics erupt upward and seemingly “blossom” in spillages of clay that appear to burst from within. This effect was achieved by a technique called ishihaze, in which small stones are embedded in the clay, puncturing its surface under the extreme pressure and heat of the kiln.

In recent years the resurgence of painting in contemporary art has been repeatedly proclaimed, and only a year ago the same venue hosted Mixing It Up: Painting Today, which similarly presented a global snapshot of innovative artists. Clearly the Hayward’s programming agenda suggests that clay has just as much potential as painting — amply demonstrated by a range of examples. American Betty Woodman’s “House of the South” (1996) presents an interplay between the dimensions: two-dimensional silhouettes of ceramic jars and fragments cut out in clay, glazed in simplified, imprecise pattern, are scattered flush to the wall in an arrangement emulating a three-dimensional scene. The caption states that Woodman was inspired by the trompe l’oeil effects of Roman frescos; the sophistication of her interpretation sneaks up on us.

Elsewhere, Czech-born Klara Kristalova’s “Far From Here” (2022) and Tanzanian Lubna Chowdhary’s “Sign 7” (2021) and “Sign 8” (2022) present polar opposites in terms of finish, form, and purpose, illustrating the sheer technical versatility of the medium. The former comprises 18 stoneware figures among a miniature foliage landscape. Kristalova deliberately mixes matte and gloss finishes, the colors running together, the feel of the artist’s hands and malleability of the material tangible as she explores woodland fairy tales and myth. The latter represents a two-dimensional geometrical pattern or sign, crisply and evenly indicating machine tooling, with solid color-blocking glaze, as a means of embodying almost a new kind of typology.

Similarly, the show reflects a spectrum of conceptual invention; arguably Iran-born Shahpour Pouyan’s conceptual process behind his “My Place Is the Placeless” (2017/2022) is equally importance to its physical construction. In 2014 he took a DNA test that revealed an ancestry originating from 33 countries, and subsequently produced a series of clay “roofs” inspired by the historical architecture of each. Less rooted to strict methodical procedure is Peruvian David Zink Yi, whose “Untitled (Architeuthis)” (2010) is a five-meter-long giant squid sprawling across the gallery floor. The giant squid had never been encountered live by humans until some deep sea photography in 2004, resulting in an almost mythical status; Zink Yi notes how fascinating it is to know of a creature we have only ever seen dead, washed ashore. The caption describes it “[evoking] the realms of myth and alchemy and reflects on the fragile boundaries between sea and land, familiar and strange, life and death.” Though Lauson may not have intended the association, the brown pool meant to signify the squid’s ink will undoubtedly evoke oil to many visitors familiar with the recent activities of Just Stop Oil. In this context, the work takes on a topical environmental meaning.

The show makes no major argument, and it’s light on statements linking the works to today’s sociopolitical conditions. This is no bad thing; the riotous joy with which these artists have manipulated the most elemental of mediums, and the resulting works, which will are a sensory pleasure in terms of both visual impact and technical wizardry, will elevate its status among contemporary minds and hopefully reinforce it as part of an ongoing art history.