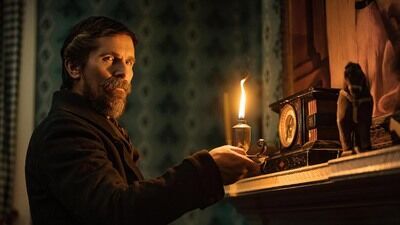 
The chilliness fits the story of course. At the Academy, a cadet, named Fry, is discovered not just dead—by hanging, it is first presumed—but with his heart cut out. The extremely spooked overseers of the school, fearful of scandal that might strike a death blow to the place, enlist a retired lawman to investigate.

Augustus Landor, played by Bale, is a solitary “cottager,” a widower whose not-quite-adult daughter left his home a couple of years prior. He likes to drink, has a sleeping partner in a warm-hearted tavern owner (Charlotte Gainsbourg), and is prone to melancholy despite his dry wit. He is reputed to have once gotten a confession from a criminal using nothing more than a “piercing look.”

Removing the hearts of corpses—there will be another—is suggestive of quite a bit. And soon Landor is sniffing into matters of devil worship. One cadet who’s been observing the detective doesn’t find that lead a credible one. The killer, he insists, was “a poet.”

This cadet is one Edgar Allan Poe, a sensitive outcast among militaristic braggarts and of course a future poet himself. Uncannily played by Harry Melling, who was similarly haunting in “The Ballad of Buster Scruggs,” Poe is taken under Landor’s wing. The duo takes a particular interest in the academy’s doctor, Daniel Marquis (Toby Jones), and his family. This clan could give the Addamses a run for its money. Mrs. Marquis is given to breaking the household china at less than a moment’s notice. Daughter Lea (Lucy Boynton) plays the piano beautifully and is very breathy and suffers from what is referred to here as “the falling sickness.” Of course, Edgar falls in love with her—all the other boys at West Point have as well. Lea observes that Edgar’s morbidity suits him well, and he in turn recites to her his poetic meditations on “Lenore.” The story’s title is derived thereof.

Adapted from a novel by Louis Bayard, “The Pale Blue Eye” is one of those mysteries that features such a limited cast of characters/suspects that its main narrative seems a feint of sorts, and it is. To wit: If you’re wondering why an actor as formidable as Bale signed on to a role in which he solves a couple of murders and contributes to the development of a great American literary figure and not much else, well, he didn’t. It’s only after the supposedly central mystery is solved that “The Pale Blue Eye” fully commits to its actual business, serving up in full a tale of loss and wrong-headed resolution. Bale’s characterization, subtle and slightly enigmatic throughout, here blooms. And eventually sears. The movie honors the real-life figure who would, among other things, become the arguable creator of the American detective story, while in its own right turning a shudder-inducing light on the darker recesses of the human heart.

On theaters today, and available on Netflix on January 6th.