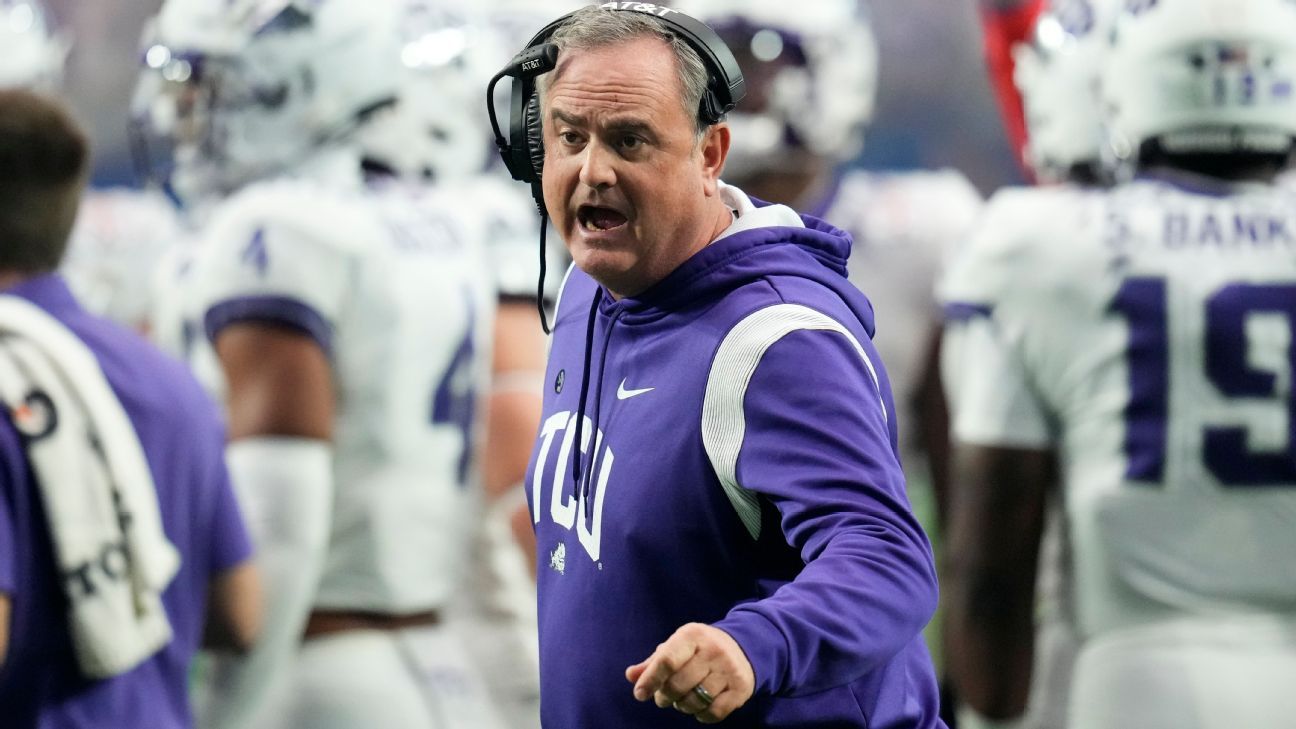 
LOS ANGELES — After all the anxiety-inducing finishes, after the Fiesta Bowl upset of Michigan, after making history as the longest of long shots to make the College Football Playoff National Championship, TCU has just one thing left to do.

“Do your job” is the unsexy, unflashy mantra that coach Sonny Dykes pounds into the heads of his Horned Frogs. Senior guard Wes Harris said he can’t even imagine how many times he’s heard it this season.

There’s not much for the Horned Frogs to lean on other than putting in the work. They were supposed to be overmatched going into the season with a new coach while losing their two best players in the transfer portal — running back Zach Evans to Ole Miss and defensive end Ochaun Mathis to Nebraska. They were supposed to be outclassed in the Big 12, where they were picked seventh in the preseason poll without receiving a single first-place vote. They were supposed to be exposed in the Fiesta Bowl, making the playoff field despite being a historic outlier in recruiting rankings. No national champion in the CFP era had a recruiting class outside the top 15 in four years prior to winning the title. TCU has never had a single top 15 class since ESPN began its recruiting rankings in 2006.

“We come into this game with a lot of motivation, obviously,” Dykes said. “It’s been a long season. We’ve exceeded expectations, at least externally. And so anytime you do that there’s always a little bit of extra motivation.”

History keeps staring the Horned Frogs in the face. After being just the second team to make the CFP despite being unranked in the preseason (Michigan last year was the other), TCU is the first unranked preseason team to make the national title game since Auburn in 2013, two years before the CFP came into existence.

None of that is daunting to the Frogs, however, because their insouciant coach doesn’t care what the narrative may be about his team or his style.

“[Dykes] hasn’t changed a single game this whole year,” Harris said. “I feel like it helps us because obviously we haven’t been on this stage before, but it’s true, dude, like we ain’t got nothing to lose. We shouldn’t feel any pressure anyway.

“He’s like, ‘Man, just do your job. It’s another game. There’s no need to blow it out of proportion even though it is the biggest game you can play.’ He does a good job of kind of just telling everybody to calm down, take a deep breath and just soak it all in.”

Dykes no doubt is soaking it all in. Coaches coach their whole lives without getting an opportunity to play for a national championship. His late dad, Spike, did it for 40 years and never got a shot at one, perhaps coming closest in his first year as an assistant at Texas in 1972 — the Longhorns finished No. 3 in the postseason poll.

Dykes couldn’t have imagined being in this position a year ago as he watched Georgia claim its first national championship in 41 years from a table in the back of Mad Dog’s British Pub, a bar on the River Walk in San Antonio, where he was in town for the American Football Coaches Association convention. This year, he’s coaching against the Dawgs in Los Angeles.

The AFCA convention is annually held the same weekend as the title game. Georgia might have expected to miss it. Not TCU.

“Every year at the convention, you make plans on where you’re watching the national championship game,” offensive line coach A.J. Ricker said. “One of our graduate assistants told me, ‘We’re gonna miss the convention this year.’ I said, ‘Yeah, that’s a good thing.'”

It’s been a surreal climb for TCU.

Harris said he was back home fishing last year at this time because football wasn’t really on his mind since TCU’s season was over. Josh Newton, the first-team All-Big 12 corner after transferring from Louisiana-Monroe, wasn’t even at TCU yet, and watched the game at his cousin’s house in Monroe. Wide receiver Taye Barber said he watched with friends at The Star, the Dallas Cowboys’ practice complex that includes bars with giant TV screens. This year, his friends can watch him on those same screens.

“We just had to come together and believe in one another and just do our job like Coach Dykes said and it can happen,” Barber said. “No matter what, anything can happen.”

The TCU contingent is not just celebrating the journey to this point. This is a chance to finish one of the most unlikely runs in sports history, as the Frogs faced 200-1 odds to win the title before the season. They’re also the largest underdogs in the national title game era (since 1998), with Caesars Sportsbook listing Georgia as a 13-point favorite.

“Look, you don’t go through all the stuff we’ve gone through this season and work as hard as these guys have worked and make all the sacrifices these guys have made to say we’re just happy to be here,” Dykes said. “I think if anything, it gives you extra motivation to finish the job because we haven’t been here before. And if you haven’t been there before, then it’s hard to say, well, we’ll be back next year.”

Across the board, TCU players say they knew from the first meetings last December with Dykes and strength coach Kaz Kazadi that things would be different. TCU safety Abe Camara said they were “all business” from the jump.

“Everybody has told us from day one that this is a national championship team. ‘You guys can make it there, you guys can win it,'” Camara said. “We’re here. Obviously, the job’s not finished. So you get the job done. That’s all. We really want to do this. It’s not just for us, though. It’s for the city of Fort Worth. Our fans have been dedicated all year. We have so many people that have been there for us. Without them, we wouldn’t be here. It’s for everybody.”

TCU, the little private school that just made it to the Power 5 in 2012, is taking aim at Georgia, the defending national champions, the new SEC Death Star fashioned by Kirby Smart in the same pressure-cooked structure that Nick Saban used to turn Alabama back into a dynasty.

Now, after all the talk, analysis and hype, the Horned Frogs just have one more game to go.

“None of us will feel good about this year if we don’t win this game,” Dykes said. “I think we’ll feel like we’ve squandered an opportunity. And nobody wants to do that.”

Harris, the bearded Texan with the thick accent, said he knows just how to finish things off.