When you meet someone and shake hands with them, you are sharing information: it is a friendly gesture that signifies a desire for social interaction. In the future, however, such a gesture may be used to share everything from your first and last name to your contact address. And that’s thanks to a new generation of smart clothing that will make it possible to exchange data and activate devices utilizing sensors and integrated circuits. It’s a technological breakthrough that will advance so-called invisible computing. And two researchers from the University of California have just given it a new push.

In this article, you will read about:

What is smart clothing

Wearables are all those electronic devices that can be worn as an extension of our body. This includes sports wristbands, smartwatches, and even smart contact lenses. By definition, smart clothing is the ultimate wearable. After all, if we are wearing anything, it is usually clothing.

Smart clothing is any garment equipped with sensors, with the ability to communicate with other devices and computing capacity. However, the latter is not essential since the data processing can be executed on another device, such as a smartphone. There are passive, active, or even ultra-intelligent smart clothing, i.e., that adapts to the environment as if it were an organism.

Here are some examples of smart clothing:

Garments that talk to each other

So far, so good, but then comes the real world where daily wear, washing, and the ravages of time make it challenging to integrate fragile electronics. According to researchers at the University of California who have just unveiled their new smart clothing prototype, the key lies in simplification. And it involves creating a new NFC (Near-Field Communication) standard.

The system they have opted for is flexible, durable, and battery-free. To achieve this, they have used copper and aluminum foils modified to operate employing magnetic induction. Thanks to the treatment applied, they can emit signals up to three feet away, unlike current NFC technologies, which have a range of fewer than three inches. The modification of these metals turns them into metamaterials, i.e., elements with radically different capabilities to the original ones. 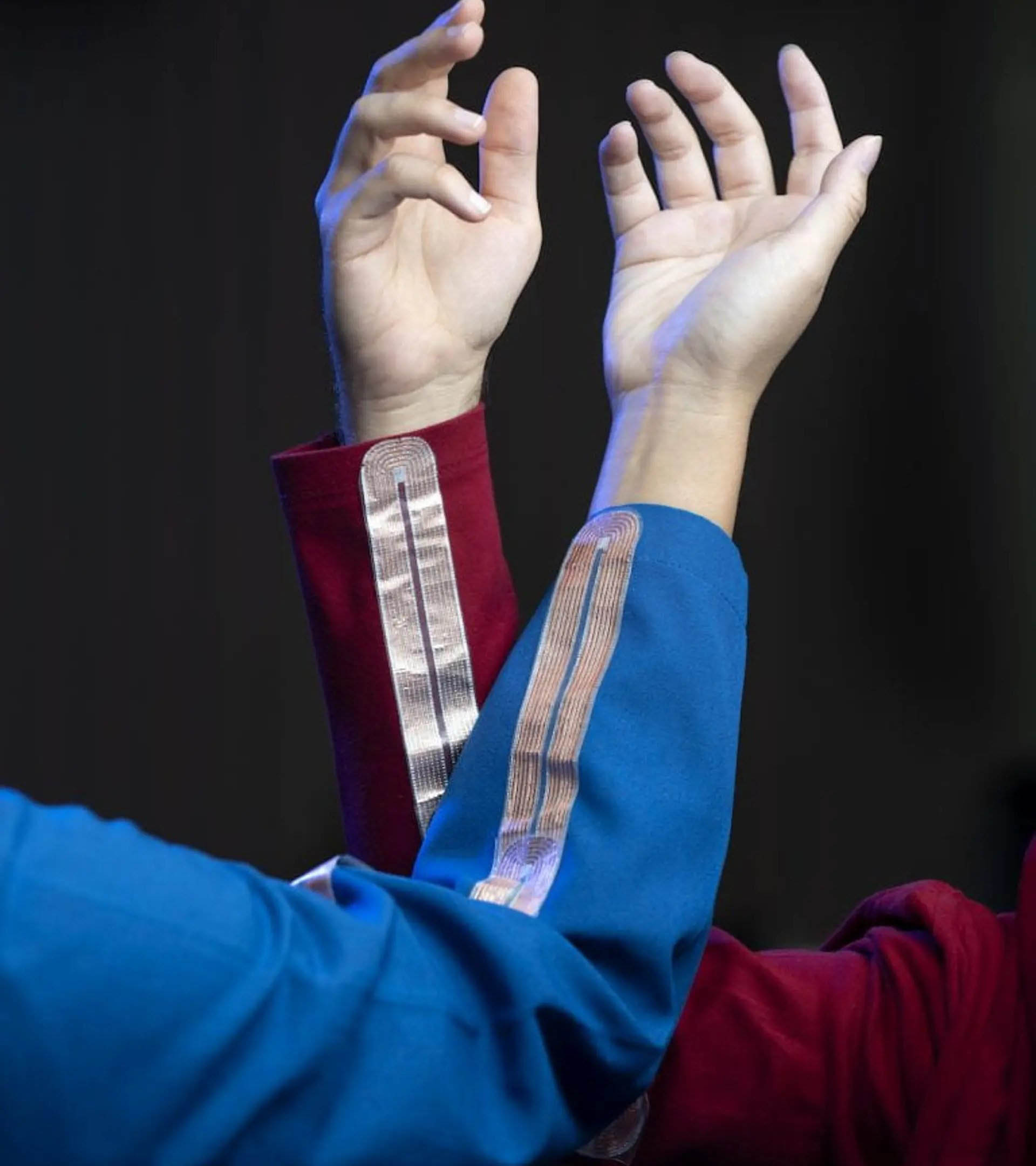 The research team points out that magnetic induction dispenses with continuous circuits throughout the garment. Thus, for example, it is possible to integrate these meshes into existing garments so that pants can measure the number of steps and a T-shirt can measure heart rate. It also makes it easier for two different people’s garments, whether the sleeves of a shirt or gloves, to communicate with each other.

This quality also implies the possibility of creating smart clothing for hospitals with multiple integrated functionalities. In any of these cases, bringing a cell phone within range would activate the sensors.

While it is true that smart clothing applications are promising, they must compete against other wearables. For example, if someone wears a smartwatch that measures their pulse, they are likely to do without a T-shirt that offers similar functionality. That’s why researchers are still looking for breakthrough applications that will enable the leap to mass-adopted smart clothing.

One of the most exciting applications in this regard comes from the laboratories of MIT in the United States. Their approach has been to develop tactile smart clothing, i.e., clothing that captures a person’s whole-body movements. This would range from twisting an arm to bending or stretching.

The prototypes they have developed use conventional textile fibers combined with specially modified pressure-sensing fibers that operate as sensors. Thus, the smart garment does not have isolated sensors, but becomes a sensor in its entirety. Among the garments, they have presented are socks that monitor step patterns or a T-shirt that monitors all movements or contact surfaces. And all this in washable and flexible garments.

The fact that the sensors are distributed throughout the garment also reduces the impact of wear and tear. Thus, in anticipation of any part of the garment ceasing to emit signals, the inventors have bolstered their technology with an AI system that detects the problem and automatically adjusts the interpretation of the data.

The researchers believe that this innovative smart clothing technology could have interesting applications in the training of athletes, correcting bad posture, or rehabilitating patients. They even suggest that these garments could teach robots to move in different situations.

If you want to learn more about these technologies, you should definitely check out articles like this one on life-saving garments.