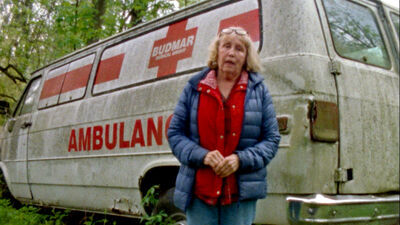 
How did you find or reconstruct the broken windshield?

My best friend, Jimmy Cochran (who was the subject of “The Christmas Light Killer”), works at a farm that does holiday-based events (hence why he was turning off the lights in “The Christmas Light Killer”). This farm also does a haunted hayride where they have horror scenes throughout a wooded area. I called him up and asked if he had any windshields I can smash for this movie? He gave me four cars I could use to do whatever I wanted with. We smashed windshields, he crashed a tractor into the car (shot briefly in the crash sequences), we just had a ton of fun recreating the crash. Side note, I initially had an idea to have my dad bash in the windshields … I shot this but it didn’t fit in the story correctly … as much as I loved it.

Lately, when it comes to movies about your family, you seem to be in favor of using 8mm film. For “Betty Feeds the Animals,” you said you wanted it to feel timeless and warm. What went into the decision for this darker story?

Super 8 felt right for many reasons for “Deerwoods Deathtrap.” It felt right as a companion piece to “Betty Feeds the Animals.” I also fell in love with the way it looked with “Betty” and couldn’t see the film in any other format. But mainly, I grew up looking at those slides, looking at old photos from that time and it was an analog memory. There was texture to it, I could hold these artifacts and use my imagination to fill in the visual gaps of the story. Digital would have been too crisp and cold to me, it was a story about the past and it felt it should feel that it is from the past.

With this and “Three Envelopes,” you’re documenting your parents’ lives with an eye toward their mortality. Do you look at this as an ongoing process with more to explore? Or do you take this one idea at a time as they come up?

I take this more as one idea at a time. I think a psychologist would have a field day with me after watching these movies. I think it’s pretty transparent that I have a great fear of the inevitable death of my parents. It’s something I know I will have to endure one day and making these movies is some sort of way of trying to get ahead of that. It does give me a sense of calm knowing that I have captured them, their stories, their personalities in these ways that will live on as long as this world keeps spinning and we have some sort of way to watch movies. It’s something that my family will have to visit my parents long after they are gone, spend nine minutes with Mom and Dad being goofballs and being able to remember their voices and see their faces.