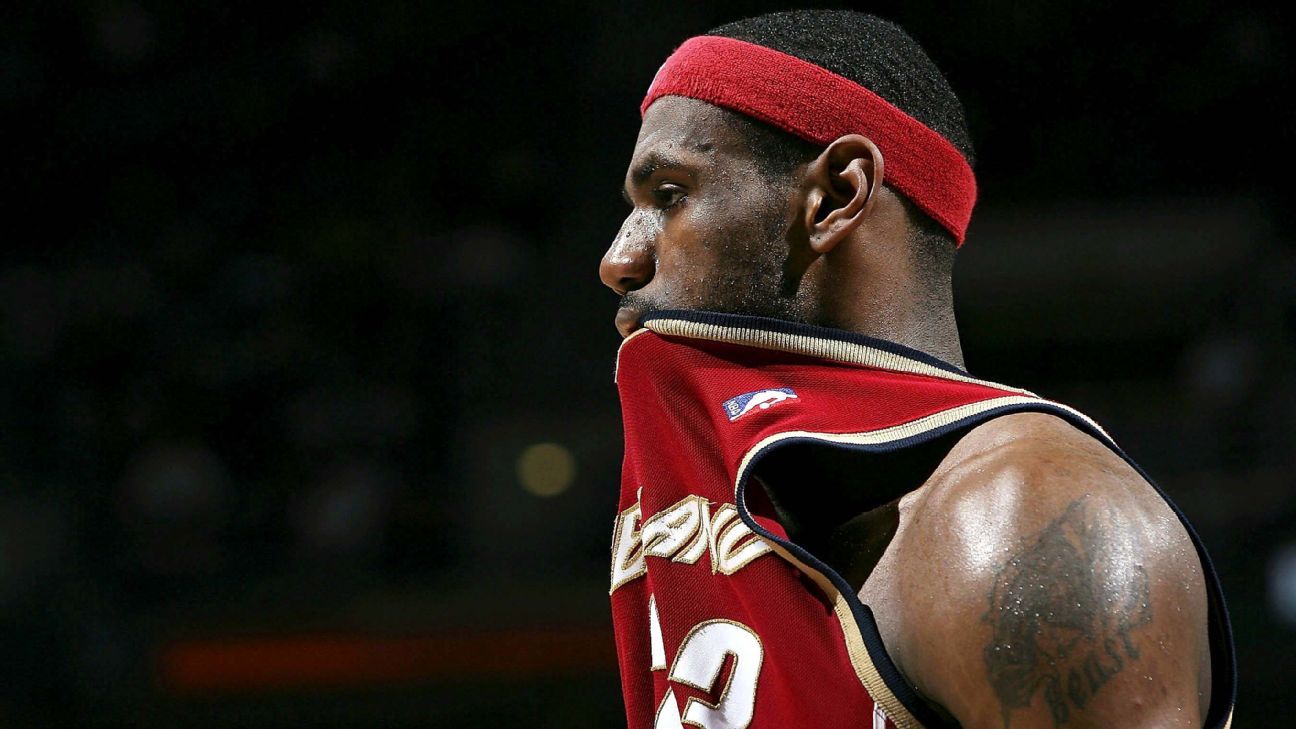 LEBRON JAMES IS well-known for his uncanny ability to recall specific moments from any point throughout his pro basketball career, whether it occurred minutes or even years prior.

But when asked earlier this week about the milestone he reached Thursday — going 16 years and 1,125 regular-season games without scoring fewer than 10 points — James was stumped.

It turns out James isn’t alone.

The game no one seems to recall? It was Jan. 5, 2007, a Cleveland Cavaliers‘ 95-86 road victory over the Milwaukee Bucks during James’ fourth season in the NBA.

His line: nine assists, five rebounds, 3-for-13 shooting from the field in 43 minutes.

“If you’d asked me, ‘Do you remember having 30-plus and LeBron being in single digits?’ I would have expected to have some kind of memory of it,” Drew Gooden, a former Cavaliers forward and now working as an analyst for Washington Wizards broadcasts, told ESPN with a laugh.

There was one person, however, who had a crystal clear memory of what happened that night: then-Bucks coach Terry Stotts.

“I’ll be honest, I remember that game distinctly — and not because LeBron didn’t score 10,” Stotts told ESPN.

The final play of that Cleveland victory — a dunk by Michael Redd with 14.8 seconds to go — would turn out to be the beginning of the end of Stotts’ tenure in Milwaukee.

“Michael had a dunk in the last seconds of the game,” Stotts said. “A meaningless dunk. We were down nine.

And, a little over two months later — after Milwaukee entered that Cavaliers game with a .500 record, and with wins in seven of their prior nine games — Stotts was fired. He would later go on to have a successful nine-year run as coach of the Portland Trail Blazers.

But while the game turned out to have significant consequences for the Bucks, for Cleveland it was simply another night on the way to a wildly successful season that ended with an NBA Finals loss to the San Antonio Spurs.

So while James’ former teammates couldn’t remember much about a random January game 16 years ago, the memories of playing alongside him remain strong.

“I’m amazed by how much he keeps developing and growing and figuring things out, all with the weight of the world on his shoulders,” Gooden said.

“He’s a real life superhero, who is always available.”

FOR MARSHALL, WHO spent parts of three seasons playing alongside James as part of a career that saw him play for eight different teams, his enduring memory of James was of someone who was dedicated to both improving and knowing the history of the game from a very young age.

“I played with a lot of superstars, but never one who studied the game from the age he was at the time,” Marshall said. “As soon as the game was over, he wanted [to watch] film.

“To me, a lot of guys today aren’t necessarily students of the game. A lot of guys didn’t know the players that played before him, that paved the way for him. He’s a guy, though, that knows Oscar Robertson’s stats. He knows Kareem [Abdul-Jabbar’s] stats. He knows Wilt Chamberlain‘s stats.”

Gooden, meanwhile, said what stood out to him was the way James, at every point throughout his life under a basketball microscope going back to his high school days at St. Vincent-St. Mary in Akron, Ohio, has always met the moments placed before him.

“Just him always figuring it out,” Gooden said. “Just being able to produce under pressure. I’ve known him since he was 15, so it’s a different perspective from knowing him over 26 years. …

“He had this Nike campaign, about how we were witnesses to his greatness. Well, we have all been witnesses. It’s just that. It’s that, plus more.”

To put James’ streak in perspective: Marshall played in 957 games across 15 NBA seasons. Gooden, meanwhile, played 790 across 14 years in the league — both far more, and far longer, than the average NBA player’s career.

“It’s actually more surprising he ever scored under 10 points than to say he hasn’t done it in 16 years,” Marshall said. “Early in your career, your rookie year, you’re going to have some games where you might not score over 10. But the greatness that he has displayed and all that he’s done, I would say I’m more surprised he had a game under 10 points than I am surprised about the streak.”

Former Cavaliers guard Daniel Gibson, on the other hand, was a rookie that season. When asked about playing alongside James, Gibson immediately recalled his pre-draft workout ahead of the 2006 draft, when he was taken by Cleveland with the 42nd overall pick.

“I had a terrible workout in Houston, and then the Cavs were my second workout,” said Gibson, who is now an assistant coach with the G League’s Cleveland Charge, told ESPN. “And [LeBron] was there and I did amazing.

“After the workout, he came up to me and it just kind of gave me all of the confidence in the world. Being that he’s LeBron James, you’re [just] hoping for an opportunity on a roster — let alone him telling you he’d love that, if I was still available, to be on their roster.

“He instilled a lot of confidence in me and then that’s what I learned about him from the day I got to the Cavs, man. He was, to me, the best player in the world, and he was still the first person in the gym, last one to leave.”

“At first I was like, ‘That’s just another one of those records that’s kind of made up,’ but then I realized it’s not. It’s like a real record.”

LeBron James, on his streak of 1,125 regular-season games with at least 10 points

For his part, James said he doesn’t pay much attention to the regular-season game streak, saying it was only something he noted whenever it popped up on his social media timeline or was mentioned in the media.

And, he said, when he looks at box scores at halftime, his point total isn’t something he focuses on.

“I see it,” James said, “but the most things I look at are our team turnovers, the other team’s points off turnovers, fast-break points by our opponents, my personal turnovers.

“That’s pretty much it. I don’t look at the total points too much.”

THE CLOSEST JAMES came to breaking the streak was March 20, 2021, when he fell to the court in agony and frustration after spraining his ankle after landing on Atlanta Hawks forward Solomon Hill.

It briefly looked like he might not be able to keep playing. But he managed to stay in long enough to hit a 3-pointer to get to 10 points before calling a timeout and leaving the game.

It would turn out to be the last game James would play for more than a month, though James said he wasn’t aware at the time of the ramifications of his made 3-pointer.

“Not until after the game,” James said.

Another noteworthy moment during the streak came during the 2017-18 regular-season finale against the New York Knicks, where James, whose goal was to play in all 82 games, immediately left the contest after scoring exactly 10 points in 11 minutes.

LeBron James is on track to pass Kareem Abdul-Jabbar as the NBA’s all-time leader in regular-season points this season. We’ll have complete coverage all year long.

While James’ double-digit points streak has become a bigger deal over time — particularly after he passed Michael Jordan’s previous record of 866 consecutive regular season games on March 30, 2018, in a Cavaliers victory over the New Orleans Pelicans — it was never something he thought about trying to achieve.

“I was like, ‘Oh, that’s pretty cool,'” James said, referring to passing Jordan. “At first I was like, ‘That’s just another one of those records that’s kind of made up,’ but then I realized it’s not. It’s like a real record. But, I don’t know. I just go out and play.

“It’s the same with the all-time scoring record when I get it. I never even [aimed for it] … It’s pretty cool. I mean, I can’t sit here and be like, ‘Oh, well, it doesn’t mean anything.’ Because it does. But I didn’t set out to do it. I didn’t.”

Whether James aimed to achieve it or not, 16 years later he’s still doing it, inching closer to breaking Abdul-Jabbar’s once seemingly insurmountable mark as the league’s all-time leading scorer with 38,387 points.

For Gooden, though, it gives him an opportunity to prove to his 10-year-old son, Drew Gooden IV, that his dad actually does know a thing or two about playing with one of the greats.

“I will be showing my son this box score,” Gooden said with a laugh, adding that his son asks about James “all the time.”

“He’ll say to me, ‘Did you talk to LeBron? Do you know it’s his birthday?'” Gooden continued. “He’s a huge LeBron fan, and he’s getting to the age now where he knows it’s the truth, because there’s data to back it up.

“There’s some historic nights I’ve been part of with him. But never did I think there would be a historic night where he scored single digits and I had 31.”