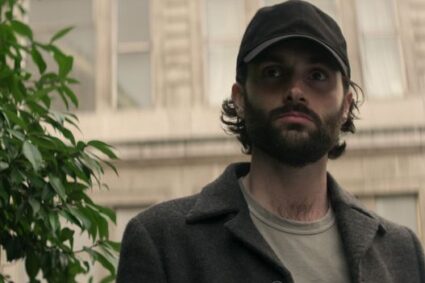 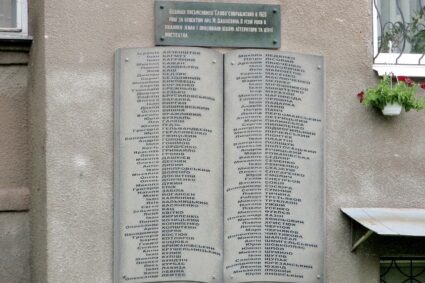 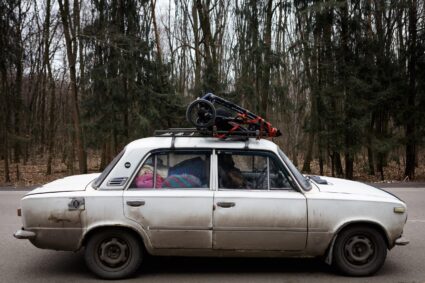 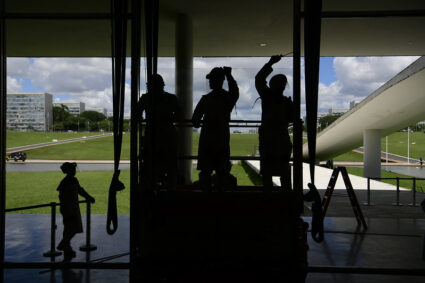 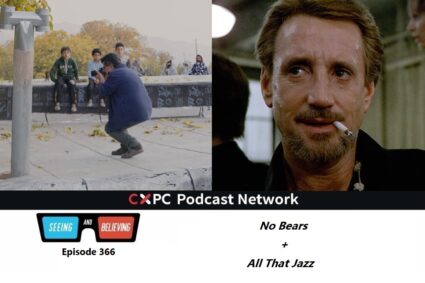 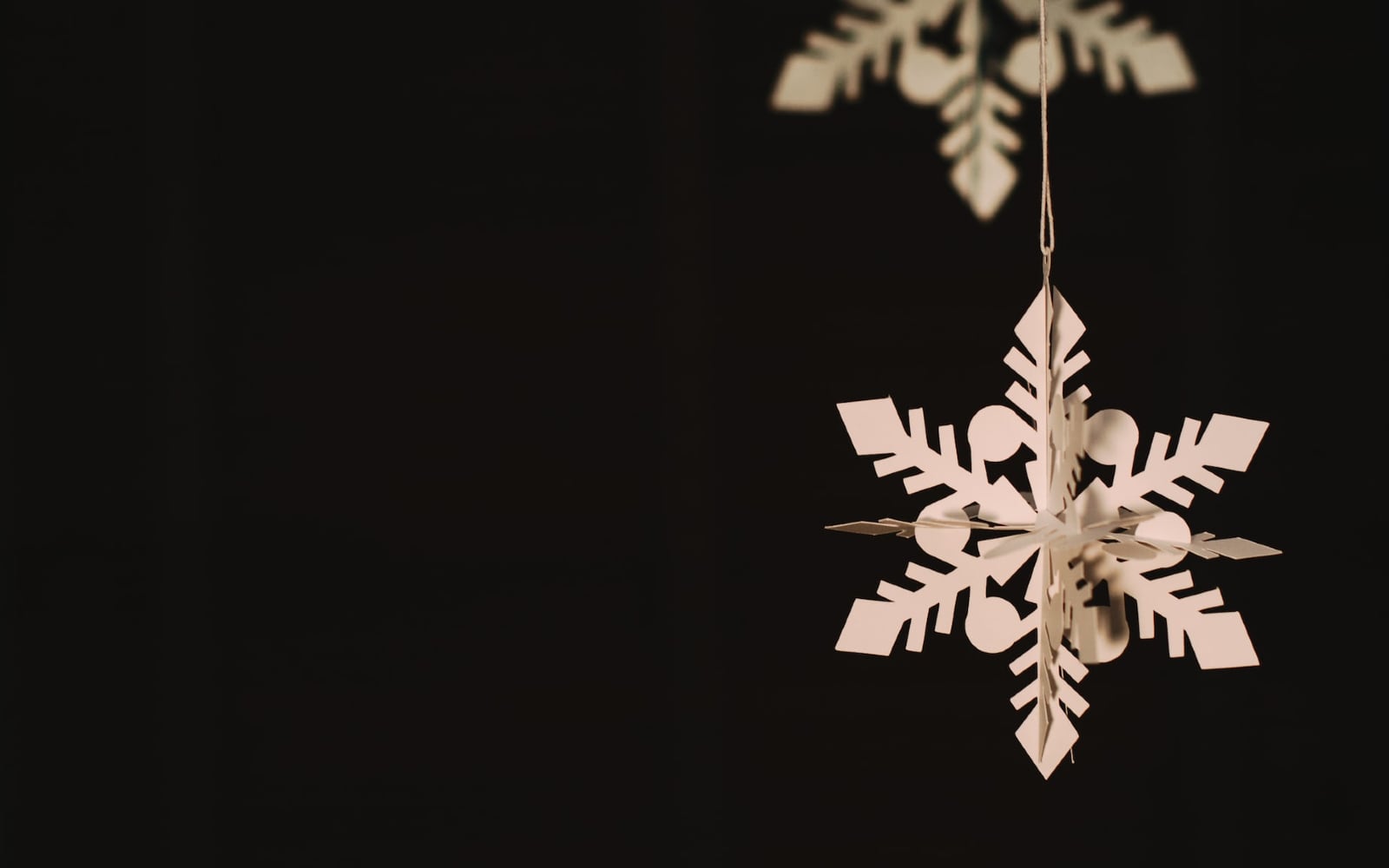 
Judy Garland refused to sing the song as it was. Songwriters Hugh Martin and Ralph Blaine wrote “Have Yourself a Merry Little Christmas” as one of the central pieces of the now classic 1944 movie musical Meet Me in St. Louis. It was to be sung when Garland’s character mournfully comforts her sister on Christmas Eve, just as their family discovered that they will be moving cross country after the holidays. The original lyrics read:

Fearing they would make her look like “a monster,” Garland and the film’s producers had Martin and Blaine rewrite the lyrics.2 Their second version captured a similar melancholy spirit but with softer blows:

Muddling through somehow was a middle ground that Garland was willing to sing about, but the song was still too maudlin for Frank Sinatra, who requested yet another rewrite for his own 1957 recording of it. In Sinatra’s version, the troubles of the present are all but gone with lines like “From now on our troubles will be out of sight” and our faithful friends, rather than being distant, are now “near to us once more.” Sure enough, this final iteration has become the standard for performers. But what might this progression reveal about ourselves?

It is almost as if we cannot allow ourselves to be sad at Christmas, as if we have a preternatural aversion to admitting that for many, the holidays are a reminder that the world is not as we want it to be. Any such admission becomes a sort of moral failure. So rather than dwell on the sadness, we look away and sing the merry and bright songs instead. But if we are attentive enough, we will see that many of our most beloved secular and sacred carols have sorrowful connotations intrinsically wrapped up inside them, which often become their most endearing characteristic.

For instance, Bing Crosby initially thought it cruel to sing his mega hit song “White Christmas” to soldiers during his World War II USO trips.3 But the soldiers cried out for the song at every performance and he soon realized he was giving them a gift, a soothing balm connecting them through the distance to all that was awaiting them on their hopeful return back home. A seemingly straightforward song about longing for a snow-filled Christmas had become a lament helping countless soldiers get through the difficulty of being away from home during the holidays.

This happened with several other songs during the war, as well, most notably “Have Yourself a Merry Little Christmas” and “I’ll Be Home for Christmas.” The latter was intentionally written from the perspective of a wistful soldier and was itself made famous by Crosby, becoming his most requested USO song.4

Our classic carols proclaiming and celebrating Christ’s coming also assume a fundamentally sad posture, though we may be too familiar with them to realize it. For instance, the Advent carol “O Come, O Come, Emmanuel” is a prayerful lament crying out for a savior in a world that needs putting right. Though the refrain is ultimately hope-filled: “Rejoice! Rejoice! Emmanuel shall come to thee O Israel,” the verses describe a people in peril: “ransom captive Israel/that mourns in lonely exile here,” “from depth of Hell thy people save,” and “disperse the gloomy clouds of night/and death’s dark shadow put to flight.” This hope for a savior amid a world in trouble is also found in the first verse of “O Little Town of Bethlehem” which opines “Yet in thy dark streets shineth/The everlasting light/The hopes and fears of all the years/Are met in thee tonight.”

Cosmologically, symbolically, and spiritually, the Christmas season is about light breaking forth into darkness. So often we want to skip to the light, to the happy ending, but these carols help us bravely face the darkness from which we long to escape. This sentiment is found in “O Holy Night,” which declares that the savior must step down into darkness, even breaking apart our real-world injustices: “Chains shall he break for the slave is our brother/And in his name all oppression shall cease.” At Christmas we rejoice that the light of Christ has come into the world, but our carols also help us recognize the darkness he stepped into and overcame.

This is the particular power of sad Christmas songs: they create for us a liminal moment in the present, where we look back on the loss of Christmases past and look forward to the uncertainty of Christmases future. Into the uncertainty and pain of the present comes the sad song with its lyrics of hopeful lament. So even though we may not be able to have the Christmas we desire in the present, a sad Christmas song helps us to embrace our sorrow and loss and make a peaceful acceptance with the way things are.

In so doing, we end up having, not the “merry little Christmas” of our ideals, but rather, the real Christmas before us, ready to be accepted. It is a Christmas of joyful sorrow realized internally in the moment through the aid of lyric and song. A sad Christmas song is that Angel of the Lord sent to comfort us when we have fled into the wilderness and are unsure of what our next step should be: we stop, slow down, and allow our hearts to sing a sad song until we know it is time to move on.

Perhaps no present day Christmas songwriter harnesses this power better than Sufjan Stevens. Though not necessarily a household name, he has released numerous critically acclaimed albums, was nominated for an Academy award, and has so far released two volumes of Christmas music, 2006’s Songs for Christmas and 2012’s Silver & Gold, both of which contain many of his original holiday compositions.

“Sister Winter” wrestles with what it means to be depressed and alienated from loved ones during the holidays, with a narrator who has locked himself in a room away from everyone and whose “heart is as cold as ice.” He eventually returns from his self-isolation, apologizes to his friends, and wishes them a sincere and triumphant “Merry Christmas!” A jarring holiday song, this is the account of someone who persevered through his inner darkness to seek reconciliation with his loved ones, despite all their shared hurt, traumas, and dysfunctions.

Another Stevens original, “Put the Lights on the Tree,” tenderly breaks our hearts by exhorting us to call our “grandma on the phone” because “she’s living all alone,” and is most likely crying on the other end, waiting for us to visit. Then there is “That Was the Worst Christmas Ever!,” which shocks us into realizing that our own childhoods were not all that bad by portraying an angry father who throws his children’s Christmas presents into the wood stove as retaliation for their raucous unwrapping behavior.

One of his funnier songs is “Get Behind Me, Santa!,” which playfully critiques the jolly old elf who breaks into our homes every year and chastises us by keeping an accrued list of annual wrongdoings. His collection of songs account for a side of Christmas not often portrayed, namely that many of us struggle to enter into it year after year and continue to be plagued with the hurtful memories from Christmases past. The strength of his songs sets us right into the midst of our guilt-filled anxieties surrounding the season and gets us to laugh at ourselves even as we cry tears of relief.

The song that most masterfully holds together the tensions of hopeful lament is “The Child With the Star on His Head,” a stunning meditation on the converging contradictions within the holiday, both within ourselves and in the world around us. Like a modern-day psalmist, Stevens intones in the first verse and refrain:

Once in a while, you may think you see better than the others
Scrambling around in the dark with your drum
There is a time when you men must grow up and be brother
Are you afraid of growing too fast?

And the trust we put in things
In small ideas, in engineering
The world of sports and second best
In consequences we will not put to rest

The second verse is written in God’s voice and finds us being called to God’s table where we are invited to set aside the troubles of the past year and find healing in Communion—with God and our loved ones. The all-pervasive ache of “The Child With the Star on His Head” acts as an annual reminder that the world is not as it should be, that I am not as I should be. And yet, despite the brokenness of everything and all the hurt, we might find a way to set aside our differences, sit down to a meal together, and rejoice in this bizarre gift of life we have all been given.

Christmas is an opportunity to slow down and assess. Like nature, frozen in time during the cold months, we too mark the time and take stock of the year. The Winter Solstice, Christmas, and New Year’s all point to new beginnings and rebirth, and thus we almost instinctively view this as our annual chance to begin again, again.

Another year has passed and we may not have lost the weight we wanted to, visited all the places which we had hoped, or fixed all the problems we expected would be resolved by now. Nonetheless, while darkness looms outside our door and anxiety, anger, and selfishness loom within, the resetting of our annual clock is the rhythmic reminder that change is possible, that those things we aspire to can become a reality.

My annual cycle—indeed, sometimes my daily cycle—is one of despair and hope, death and rebirth, decay and renewal. Our sad Christmas songs, which we return to every year, are our musical reminders of this cycle. They do not remind us that Christmas is “the most wonderful time of the year” so much as remind us that, even though the world has not yet been made fully right, one day it will be. An aural therapeutic remedy, they help us lament and keep on hoping by making peace with the disappointments of the past and the unknowns of the future and so bring us to a place of acceptance and transformative grief.

Christmas may remind us of loved ones who are gone, of loves lost, of the brokenness of it all, from our family and friends all the way down to the cracks of civilization itself. But sad Christmas songs can get us through, as we stare out our windows into the cold winter night, embracing the world before us.

1) Gilbert, Sophie. “‘Have Yourself a Merry Little Christmas’: An Ode to Seasonal Melancholy.” The Atlantic.

2) “The Story Behind ‘Have Yourself A Merry Little Christmas’.” NPR.

3) Murtaugh, Taysha. “The True Story Behind the Song ‘White Christmas’ Is Even Sadder Than Its Lyrics.” Country Living.

4) “I’ll Be Home For Christmas.” Library of Congress.