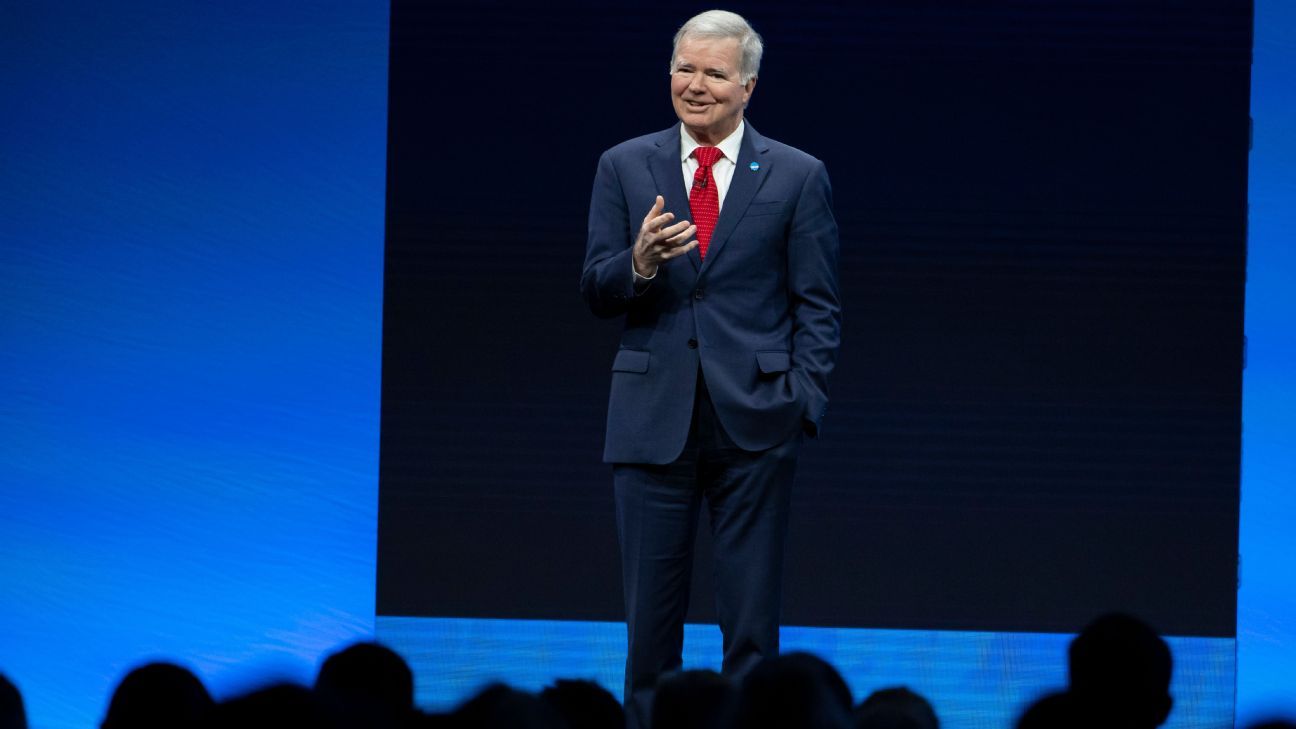 
INDIANAPOLIS — Outgoing NCAA president Mark Emmert said Wednesday evening he has “very mixed emotions” about ending his 12-year tenure while the college sports industry and its leaders are in the midst of attempting to sort through a barrage of potentially existential issues.

Emmert, who will officially step down from his post as the association’s top executive at the end of February, was the first witness called Wednesday in a civil court trial to determine if the NCAA holds legal responsibility for the death of a former Division II quarterback who suffered a concussion while playing college football. It is the second concussion-related trial for the NCAA in the past three months, and one of several ongoing legal issues that have made Emmert and the association regular visitors to courtrooms during the tail end of his NCAA presidency.

The NCAA is also facing a number of legal challenges aimed at making college athletes into employees of its schools or providing other avenues for them to share in more of the profits they help to generate.

“I look at all these challenges and complexities and I’m going to miss that,” Emmert told ESPN. “I like those, and I’d love to be someone who helps untangle them. On the other hand, I think it’s the right time to make a change.”

The NCAA announced earlier this month that former Massachusetts Gov. Charlie Baker would take Emmert’s position starting in March. Emmert said that he played no role in selecting his successor, but that he was “delighted” that the NCAA’s Board of Governors hired Baker.

Baker recently finished an eight-year term as governor, and Emmert said he has been giving Baker time to recharge rather than trying to work with him to ease the transition of leadership. He said Baker’s political acumen will be an important asset for the association during a period in which it is asking Congress to help solve some of its legal issues.

“It’s critically important,” Emmert said. “I’m sure that’s part of what the board loved about him. He’ll be able to move in that world very well.”

NCAA board members have publicly asked Congress to create federal laws that would clearly state that athletes aren’t employees of their schools and also provide an antitrust exemption that would allow NCAA members to regulate the evolving marketplace for endorsement deals that has reshaped the economics of college sports in the past two years.

Emmert said turning to Congress was a “last resort.” He believes that while passing some form of NCAA rules years ago to regulate the name, image and likeness endorsement market would have put college sports in a better position than the place in which it currently sits, there was no way that he or the association could have avoided the need to turn to Capitol Hill for help.

“It was inevitable,” he said.

Wednesday’s court appearance marked what will likely be the final time that Emmert is compelled to testify about the NCAA’s responsibility for its athletes’ health. He told the Indianapolis jury that the association has a “moral obligation” to support the health and well-being of college athletes, but that legally the NCAA was not responsible for any injuries that athletes suffer while playing sports in school.

The case was filed by the widow of Cullen Finnerty, who won three national championships and 51 total games as the starting quarterback at Grand Valley State University in the early 2000s. Finnerty died in May 2013 at age 30 after going missing on a fishing trip with his wife’s family.

Attorneys for Finnerty’s widow argued that the NCAA has known about the potential long-term brain injuries that can result from concussions and subconcussive blows to the head since the 1930s and say the organization shirked a duty to its athletes by not warning them about those dangers. They say that Finnerty developed an addiction to opioid painkillers and other health problems due to chronic traumatic encephalopathy or CTE — a degenerative brain disease linked to concussions.

NCAA lawyers said in their opening arguments Wednesday that Finnerty’s death was not related to his time as a college football player, and that individual schools — rather than the NCAA — are responsible for medical care provided to athletes.

The NCAA won a similar lawsuit filed by the widow of former USC linebacker Matthew Gee in November 2022. The organization under Emmert’s watch also agreed to spend $75 million to settle a class-action concussion lawsuit. That money is used for a medical monitoring program for athletes and concussion-related research.

If the NCAA is found to be legally responsible for the long-term effects of head injuries that occur during college sports contests, it could pose a significant financial threat to the association. The NFL, by comparison, has paid nearly $1 billion to former players or their families to settle similar claims about head injuries in recent years.

Emmert declined to answer any questions about the current case or the magnitude of the threat that concussion lawsuit poses to the NCAA.