Two shocking statistics highlight the challenge. Firstly, in 2021 there was not a single country in the world that met the air quality standards set by the WHO. And secondly, the same organization estimates that air pollution is responsible for one out of every nine deaths per year worldwide. Using green power makes it possible to combat this almost invisible enemy mainly derived from fossil fuels. But there are many other solutions to air pollution.

How air purification with mycelium works

The use of fungi in sustainable architecture has already featured prominently in several of our articles in the past. What’s more, such an approach has its own name – mycotecture. A discipline that primarily uses the mycelium of fungi, i.e., their subterranean filaments, to produce organic structures. Now a Brunel Design student has come up with another sustainable application for these enigmatic organisms.

Named Myco-Hex, they are modular, hexagonal tiles that are integrated like honeycomb cells. The main component is mushroom mycelium, which has an explosive growth capacity and other properties. Firstly, it can absorb up to 80% of the carbon dioxide in the air. And secondly, it traps a large number of suspended hydrocarbon particles, a property that has already been proven in the cleanup of oil spills in the Niger Delta.

In addition to mycelium, this solution to air pollution has compartments in which nutrients are stored, which will be initially based on wood sawdust. However, using other raw materials, such as coffee grounds or compost from organic waste, is feasible.

Addressing air pollution is essential for the respiratory tract and skin care: hydrocarbon particles can cause ailments such as psoriasis, eczema, and even skin cancer.

As indicated in previous articles, mycelium-based structures also have fireproofing and insulating properties, thus allowing them to protect building facades and purify the air.

Other solutions to air pollution

Electric mobility technologies are some of the primary solutions to air pollution, but there are also complementary techniques that could alleviate it. Here are some of the most striking ones we have seen lately: 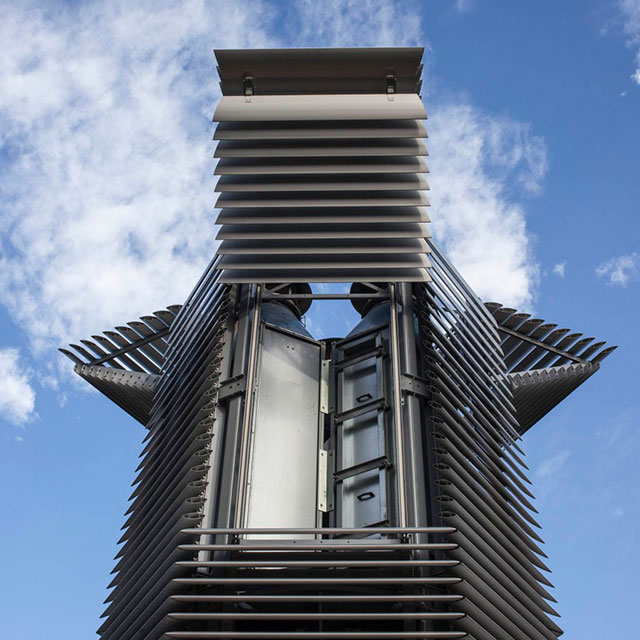 Along the lines of mycelium, vegetation is one of the most common solutions to air pollution. Unfortunately, cities often do not have enough space for green areas. This is where the moss walls installed by a German company come into play. They can absorb carbon dioxide and polluting particles from the air without needing soil and more efficiently than trees.

A Dutch designer has devised a more drastic solution than moss panels. In his case, it is a seven-meter-high vacuum cleaner with a design inspired by Chinese pagodas. Research shows that the air in the areas where it has been installed is 75% purer. And that with the energy consumption of a living room fan.

What was once an architectural element designed to let in light and air from outside is now integrating more and more features, from photovoltaic glass to integrated TV screens. Stanford University and Tsinghua University in Beijing have joined forces in this field to develop a polymer coating sprayed onto window glass. This thin layer of nanofibers can filter out up to 90% of harmful particles and prevent them from entering buildings, which could be another solution to air pollution.

Concrete that grows (and cleans the air) like plants

Green concrete promises to be one of the significant assets of sustainable architecture. Several solutions have already been developed based on bacteria or synthetic chloroplasts that mimic photosynthesis to mineralize atmospheric carbon dioxide. And not only that: mineralization confers self-repairing properties to the material.

As you may have noticed, several of the solutions to air pollution mentioned in this article are inspired by nature to achieve more sustainable cities. This is known as biomimicry or biomimetics, a scientific approach behind many sustainable inventions.