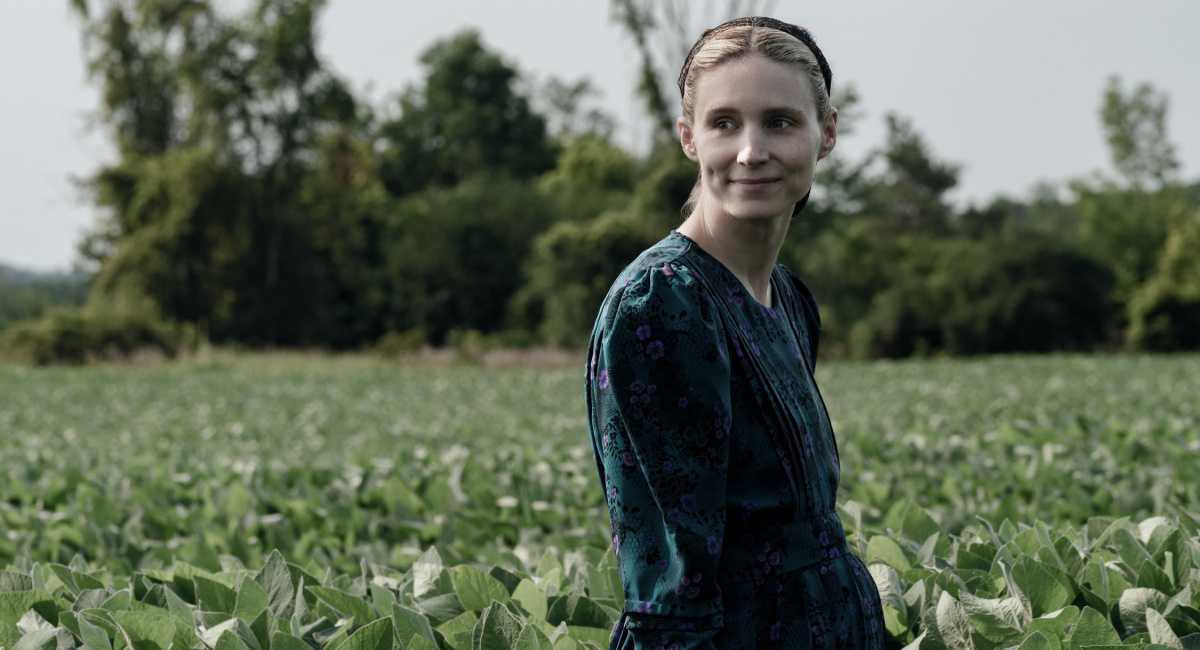 On limited release now before opening more widely in theaters on January 6th, ‘Women Talking’ represents fourth movie from actor and director Sarah Polley, and while it is certainly her stagiest effort, there are deep, dark and uncomfortable truths running through the script and an outstanding cast bringing those words to life.

‘Women Talking’ marks the second time that Polley has adapted someone else’s work, the first being 2006’s ‘Away from Her’. Here, she draws from Miriam Toews’ 2018 novel, itself written as a reaction to shocking true events that happened at the Manitoba Colony in Bolivia in 2011.

At the ultraconservative Mennonite community, girls and women woke up regularly to discover they had been sexually violated. The attacks were written off as “wild female imagination”, or else attributed to ghosts or the work of Satan.

In truth, a group of colony men had been spraying an animal anesthetic into neighboring houses at night, rendering everyone unconscious, and raping the women. The colony elders, deciding that the case was too difficult to handle themselves, called local police to take the perpetrators into custody. 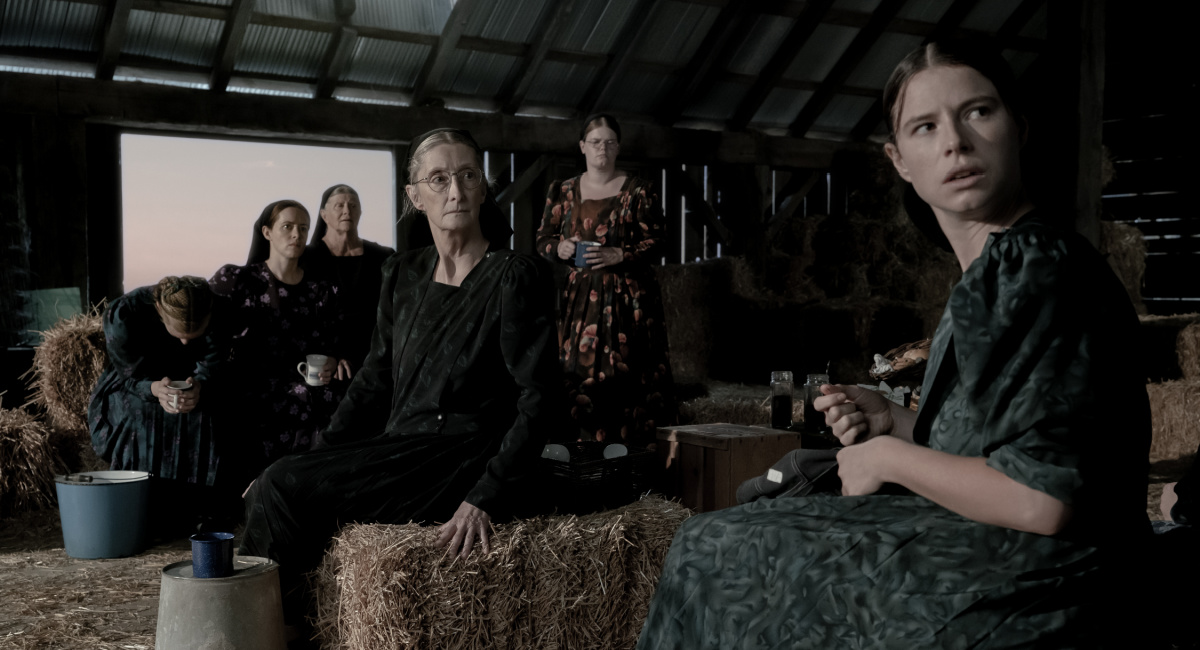 The movie’s story unfolds shortly after the men have been taken away, with several of the remaining men heading into town to post bail for their fellows. A group of the colony’s women gather secretly to discuss what to do in the wake of the revelations. Their reactions run the gamut from fearful to furious, and the debate covers all manner of subjects, but is focused mainly on a vote as to whether they stay, fight or leave the community altogether.

None of the options are perfect––some argue that if they leave, their Mennonite religion (though the name is never mentioned) teaches that God won’t be able to find them and they’ll be denied their place in Heaven. Others are burning with the desire to exact revenge on the perpetrators. And some are concerned that leaving means the boys left behind will have no one to care for them and guide them into becoming more responsible men than some of those who have come before them.

Even if you haven’t read the book, the film’s title will leave you in no illusion as to what to expect. Though that might turn some off, expecting an exercise in dialogue and tone, the intellectual and spiritual fireworks between the main characters more than makes up for an assumed lack of forward movement.

This is, by its very nature, a painful and difficult film to watch––for women who will identify with the dilemmas, and for men who should gain further insight into the high wire than women everywhere must walk on a daily basis when confronted with terrible behavior towards them. 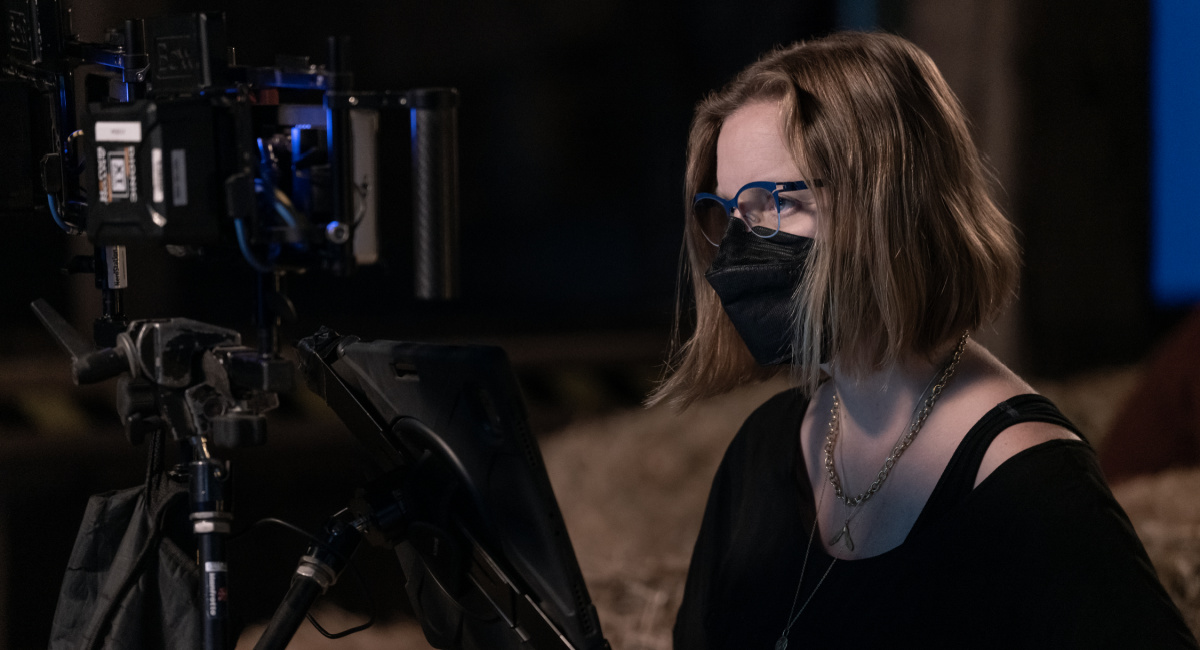 A film as dialogue driven as this one lives and dies on the quality and skill of its cast, and here, Polley’s latest has its greatest strength. An actor for years before she began to devote more of her time to directing, she has a real eye for talent and knows how to work with fellow performers.

For ‘Women Talking’, Polley (along with casting directors John Buchan and Jason Knight) have assembled an exemplary ensemble of actors of various ages and stages of their careers, one of the finest gathering of women on screen in many years.

The likes of Rooney Mara, Judith Ivey, Claire Foy, Sheila McCarthy, Frances McDormand and Jessie Buckley anchor this one, clearly relishing the chance to show what they can do when they’re given the chance to take center stage.

While some, such as Mara, Foy and particularly McDormand, have been able to find roles that let them shine (with awards glory and nominations following), others are still breaking through, relegated to second string characters compared to their male counterparts. Even Foy, in movies such as ‘First Man’ had to make do with a less compelling wife role. 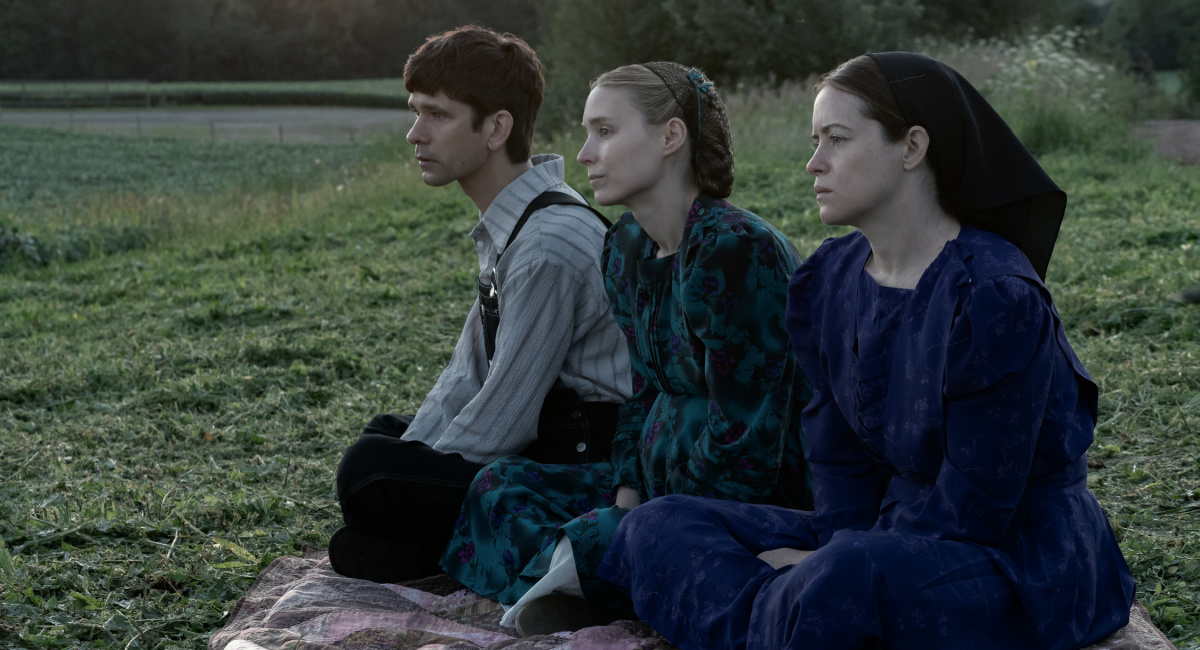 Here, there is no such restriction. The only real male character in the film is August (Ben Whishaw), whose family was excommunicated, but who has been allowed to return after securing an education in the outside world and teaching the boys (the young women are not considered worthy of lessons, even though the story is set in 2010).

Sweet-natured and thoughtful, he’s permitted to sit in so as to take the minutes of their meeting (one might argue that treating a secret gathering to decide urgent action like a council meeting to figure out a new pedestrian zone might seem unlikely, but the women are raised to be formal and all are detail-orientated.

Foy pulsates with anger as Salome, matched by Buckley’s Mariche, who is seen near the beginning attacking some of the men in custody with a scythe. She wants to see justice done––even if she must do it herself, but slowly starts to question her rage. Ivey as elder Agata, looks to remain calm, while McDormand’s Scarface Janz––who delivers monologues while rarely saying a word thanks to her expressions–– seethes and counsels. 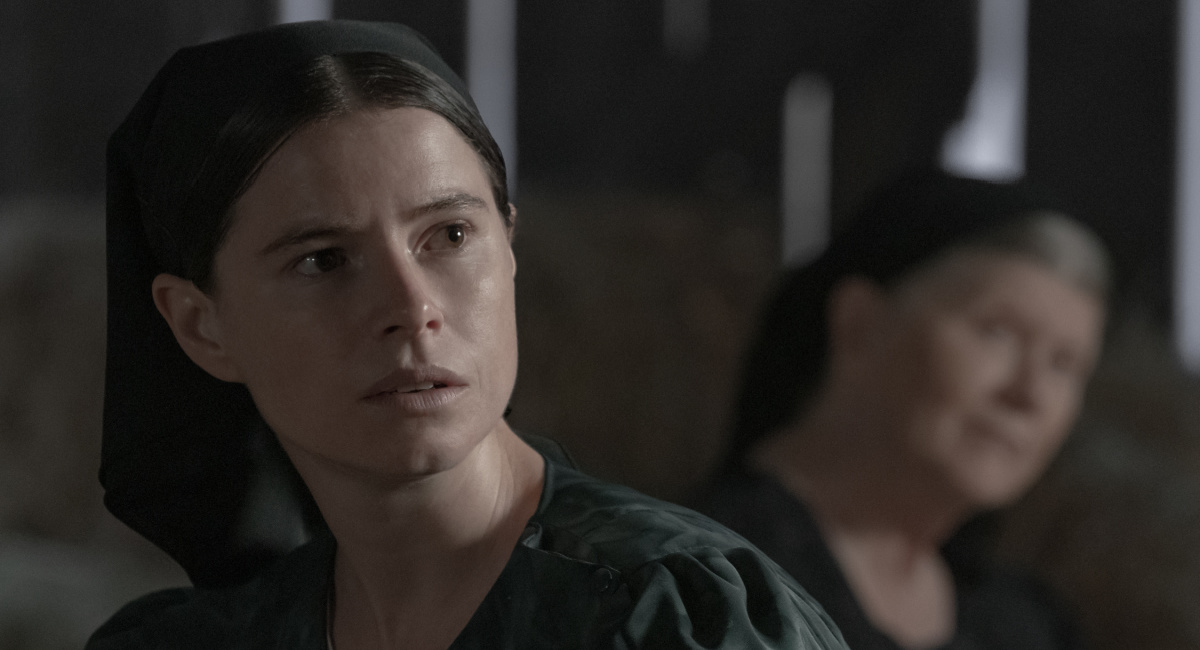 The entire cast is, without exception, impressive, whether it is young victims wandering through fields, stunned at learning what really happened to them, to others giggling and scampering their way through the meeting, not really cognizant of the huge issues being debated. And, of course, the leads, feasting on Polley’s adaptation, render some of the best performances of the year.

There is a somewhat stage bound feeling to the whole affair, though the crackling interchanges between the women certainly help overcome the idea that this might have been better served as a play. Though the most significant action is a census taker driving through the community looking to count heads, the tone, by turns meditative and electric, is a feature, not a bug.

Polley is becoming a first-rate director, and here she truly has a cast to match. ‘Women Talking’ might be a tough watch, but it’s worth paying attention to. 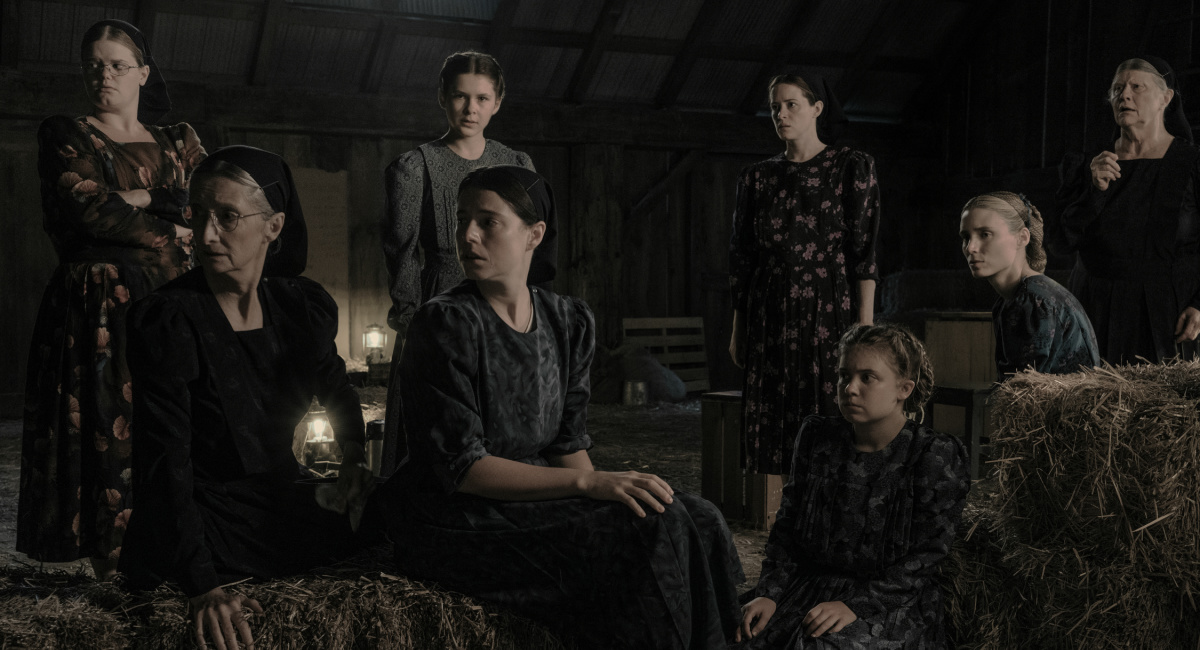 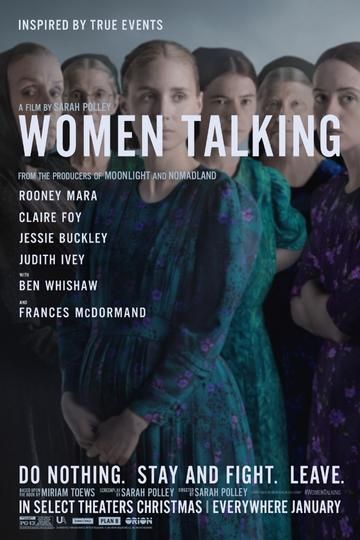 “Do nothing. Stay and fight. Leave.”

Do nothing. Stay and fight. Or leave. In 2010, the women of an isolated religious community grapple with reconciling a brutal reality with their faith. Read the Plot