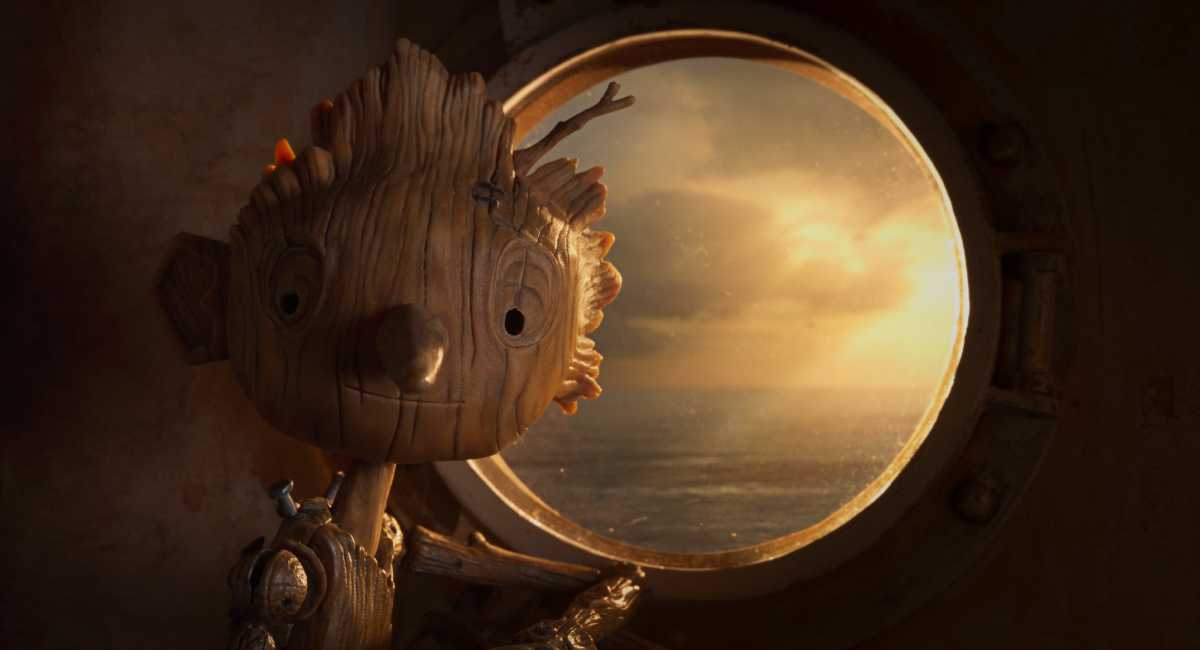 And this is, by a long distance, a much more satisfying, very different version than the Disney offering that landed on Disney+ back in September.

In fact, we’ll go so far as to say that there is more inventiveness, care and technique in one wooden finger of this passion project from the director of ‘Hellboy’, ‘Pan’s Labyrinth’ and ‘The Shape of Water’ than in the entire Disney effort, which offered minor charms and little reason to justify its existence.

A passion project of the Mexican director for many years, representing several false starts and financial frustrations, that it’s arriving at all is miracle enough, but that it’s this good is even more reason to celebrate.

Yet this is also no sanitized, completely family-friendly affair. There is a darkness and element of horror at the heart of del Toro’s film, which feels even more in keeping with Carlo Collodi’s moral fable. 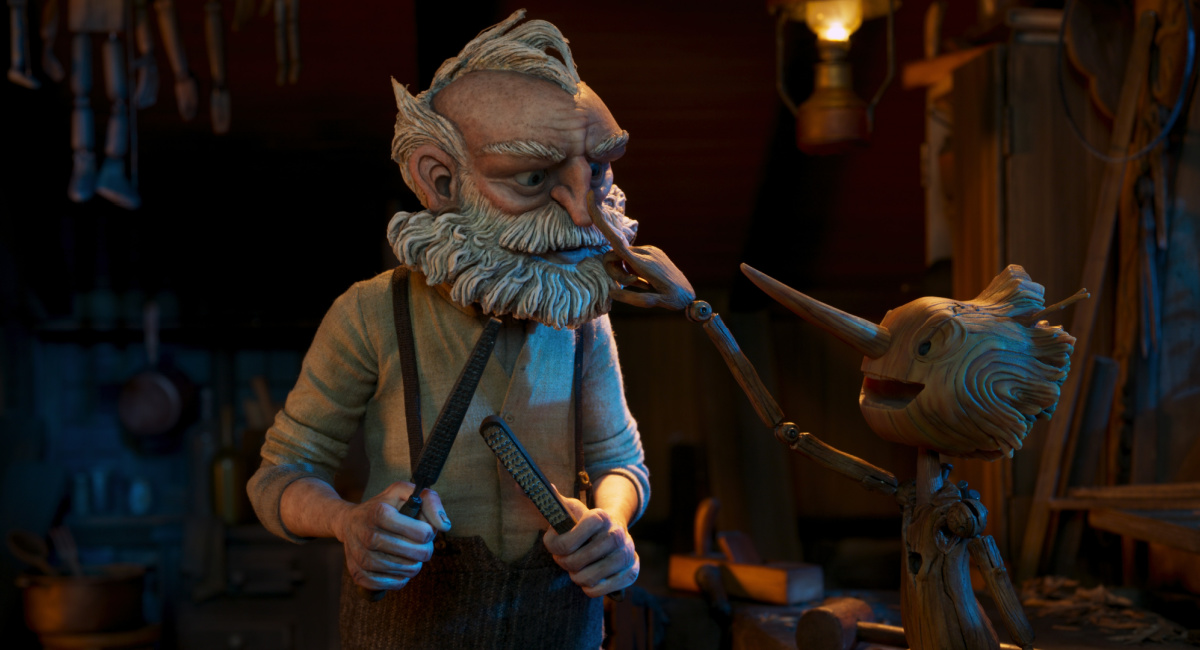 Drawing on the classic tale, the stop-motion musical follows the extraordinary journey of a wooden boy magically brought to life by a father’s wish. Brought, it should be said, to life by a wood sprite creature that wouldn’t look out of place in one of del Toro’s live-action fantasies, and voiced by Tilda Swinton, whose character has a sibling in the spirit of Death, whom Pinocchio meets more than once on his travels.

And continuing a theme he established in ‘Pan’s Labyrinth’, del Toro uses war and totalitarianism as the backdrop for the narrative. Set during the rise of Fascism in Mussolini’s Italy, this is a story of love and disobedience as Pinocchio (voiced by Gregory Mann) struggles to live up to his father Geppetto’s (David Bradley) expectations.

If Disney’s take featured the now-iconic version animated version of the main character overlaid with a CG sheen, its hard angles lovely sanded down to a smooth, kiddie-pleasing finish, so del Toro and co-director Mark Gustafson opt for a gnarly, more realistic puppet that looks like it was carved from waste wood, all knots and stumpy bits of carpentry. Though this living marionette is no less appealing.

An agent of chaos from the off, Mann’s Pinocchio chafes against rules and regulations, finding fun in disobedience, and needing to learn that there’s a time and place for such behavior.

Still, he’s a loveable lad, singing his way through some memorable numbers and encountering fear from the townsfolk. And he has his conscience present and correct––living (literally) in his heart––in the shape of Ewan McGregor’s Cricket. 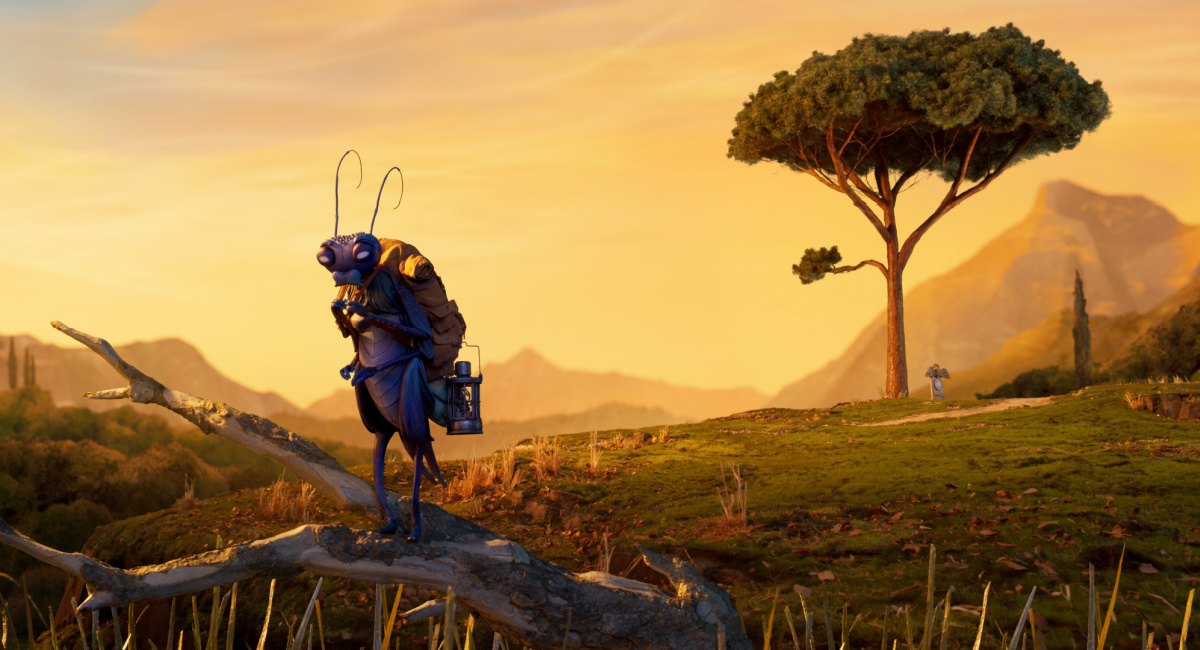 The expected beats of the story––Pinocchio tempted away from attending school by the lure of fame from manipulative, cruel showman Count Volpe (Christoph Waltz)––are all found here, but this take on the take expands it beyond those boundaries to explore death, disobedience and those (such as Ron Perlman’s Podesta, who fervently believes in the darkness spreading across his country) would champion hurtful ideologies. After all, it’s not every adaptation of ‘Pinocchio’ that would dare to have Mussolini as a character, and then have the lead sing a song that roundly insults him.

Del Toro worked on the screenplay Patrick McHale and Matthew Robbins, and the result of their toil is a clear-eyed and timeless fable.

Voice-wise, the cast is spot on. Mann (doing double duty as Geppetto’s late son Carlo in a flashback to how the poor land died and as the central character) is charming without ever tipping over into precociousness.

David Bradley, who might be better known to audiences as the grumpy Argus Filch from the ‘Harry Potter’ franchise, here infuses Geppetto with real humanity: by turns mournful or frustrated, loving and chastising. Around them, there are the talents of actors such as Waltz, Swinton, McGregor, John Turturro, Tim Blake Nelson, Burn Gorman and voiceover regular Tom Kenny.

When you have Oscar winner Cate Blanchett showing up to provide guttural screeches for simian character Spazzatura, you know the phrase “embarrassment of riches” creeps into the casting discussion (and yes, Blanchett is excellent).

But the voices would be nothing without the beautiful animation and it’s here that that the new effort truly comes alive. Like its central figure (and again, in keeping with its co-director’s sensibilities), this is an authentic, very practical and darkly hewed world, bursting with fascinating little details, such as the skeletal rabbits who guard the link between the world of the living and the dead (and amuse themselves with card games). 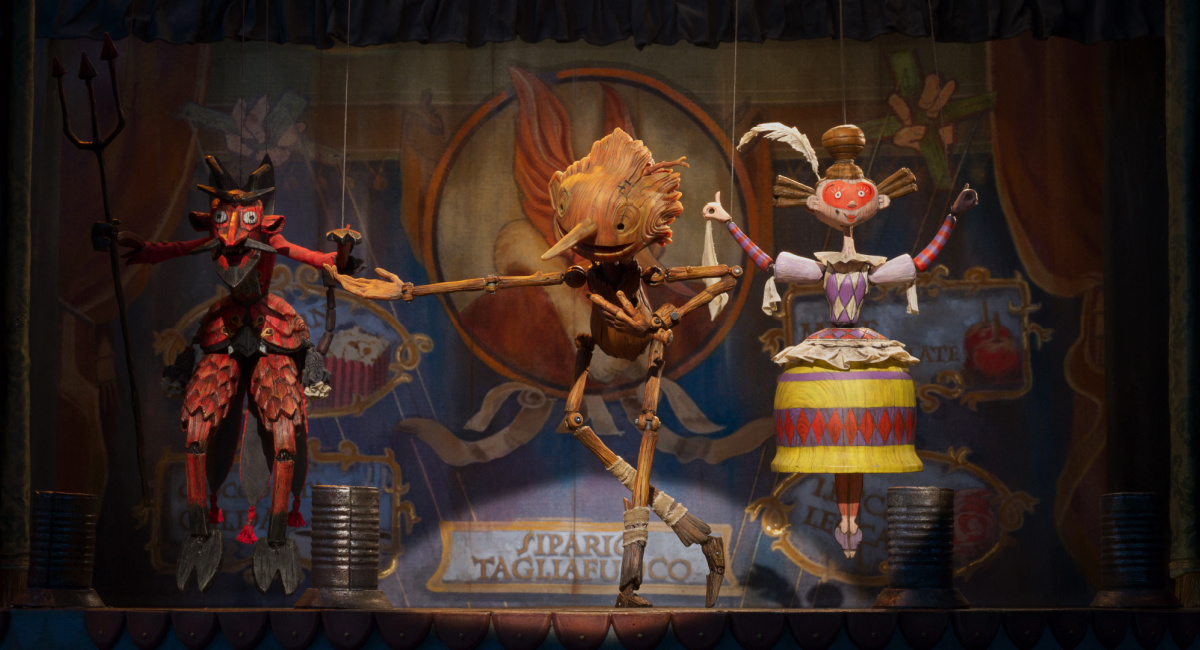 Every single puppet, prop, landscape, building and gesture is created with deep attention to detail, and lavish craft.

Though the running time is a hefty one for a movie aimed at families at nearly two hours, it doesn’t waste a moment of that time. And yes, while parents might find themselves having difficult discussions with children about the subjects of death and hatred (and whether Mussolini was a poopy baby), they are themes worth exploring, and the film does so with heart and brains.

There really is no comparison between the two ‘Pinocchio’ films––for all the Disney-friendly fun offered by the Robert Zemeckis movie, del Toro’s makes it look like a bargain bin knock-off with plastic parts. This movie, for all its grungy, darker elements, bears the seal of quality and careful carving. An artisan piece of work that skips pretentiousness and instead bristles with chaos and imagination.

If you only watch one (of the approximately 572) adaptations of Collodi’s story, we recommend this one. Del Toro has been planning this one for nearly two decades––and it has been more than worth the wait and effort. 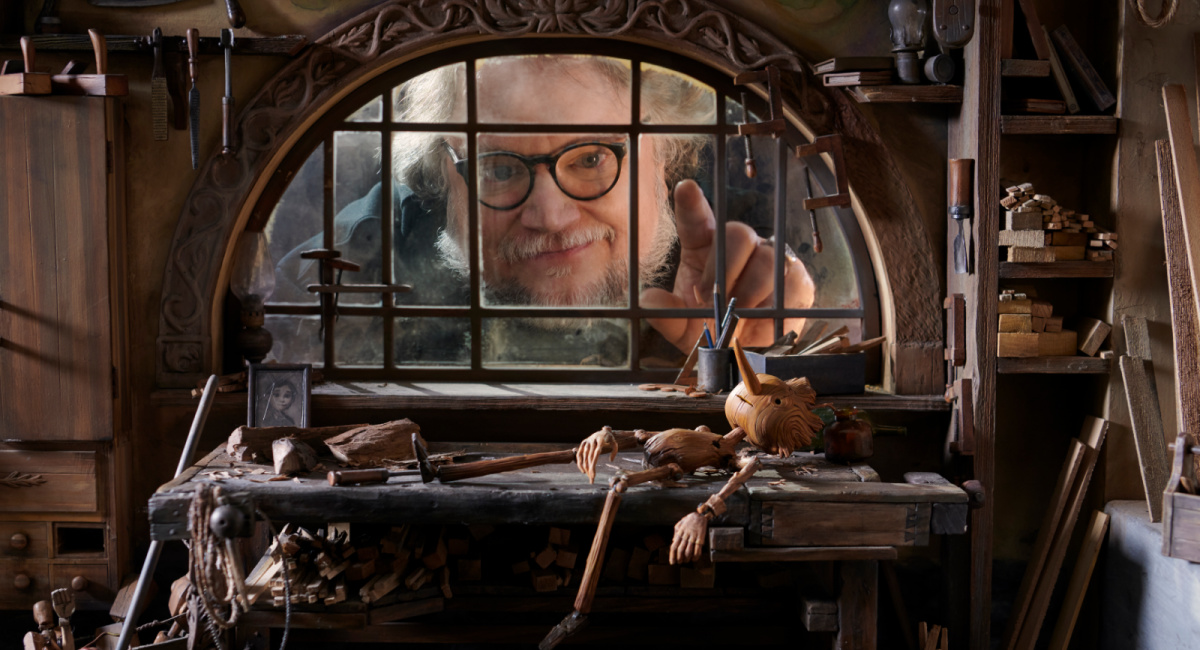