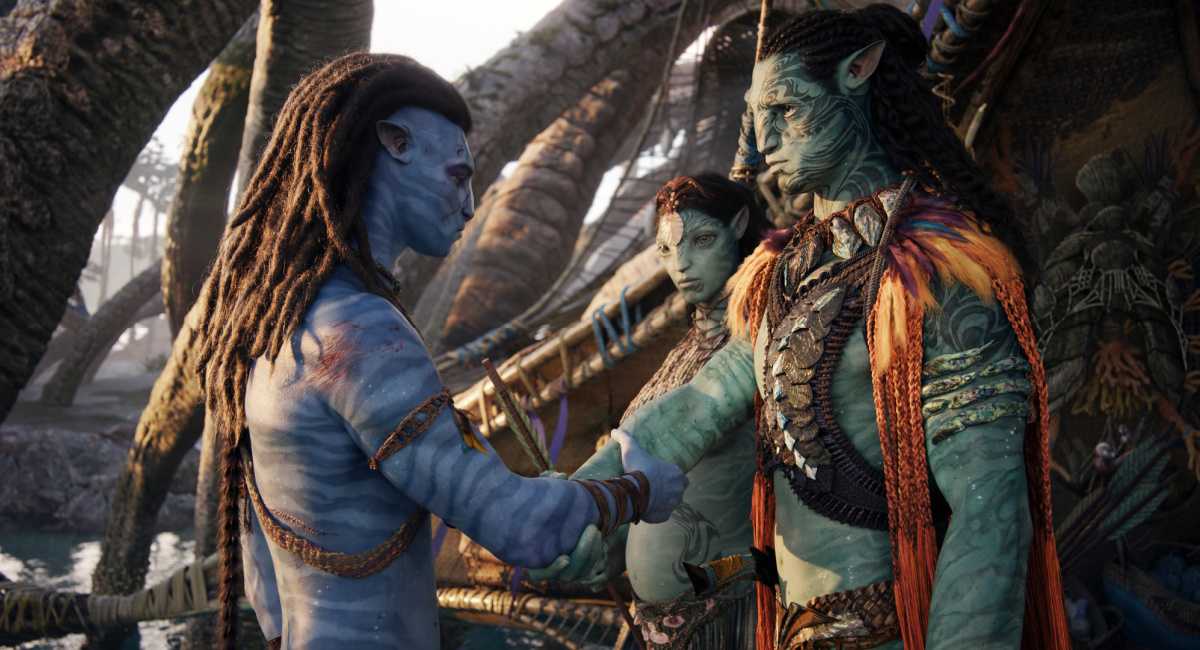 Arriving in theaters on December 16th, ‘Avatar: The Way of Water’ represents James Cameron attempting the same high wire trick he pulled with the 2009 original, with the added pressure of 13 years between releases.

But as the old maxim in Hollywood goes, it’s best not to bet against Jim Cameron! This is a man who was told that his film about a troubled, true-life ship would sink without trace. That he couldn’t come up with a solid sequel to a movie about a killer cyborg. And, most tellingly, that no one could turn 3D from a gimmick to a worthwhile format, especially not with a movie about some blue creatures whose storyline seemed to be an expensive, live-action remake of ‘FernGully: The Last Rainforest’.

None of the naysayers had further comment after the success of ‘Titanic’, ‘Terminator 2: Judgment Day’ and ‘Avatar’.

It’s safe to say that, while the original may not have left the same lasting cultural crater as it did on the box office (it took until ‘Avengers: Endgame‘ to truly dethrone it, and a recent re-release has seen Cameron claim the crown back again), ‘Avatar: The Way of Water’ looks set to go over just as well. 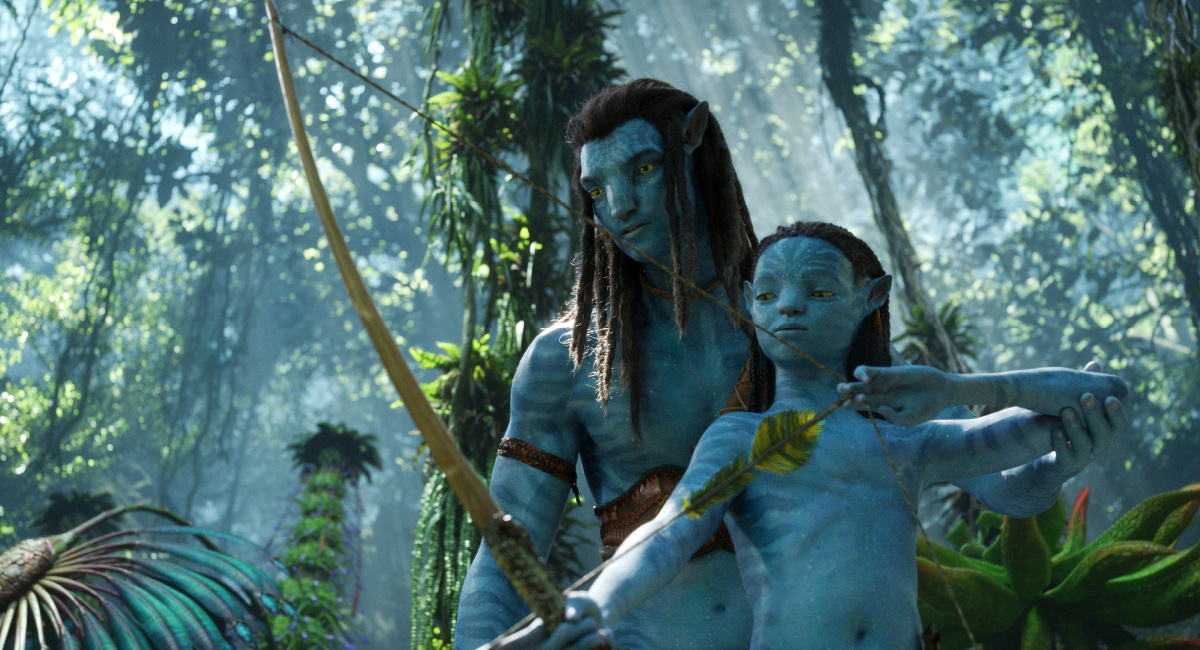 The story picks up more than a decade after the events of the original film (for those who somehow find themselves in a theater watching the new movie without having seen that, there is a helpful exposition dump from Jake Sully (Sam Worthington) himself.

Jake, see, was a paraplegic human brought to the moon of Pandora to replace his late brother, a marine who was part a mission to subdue the local populace, known as Na’vi, so humanity could continue strip-mining the place. Your basic colonialist narrative with the added wrinkle of “Avatars”, lab-grown versions of the Na’vi to which a human consciousness can be connected – one of which had been earmarked for Jake’s sibling.

Instead, Jake encountered  the Na’Vi, met warrior Neytiri (Zoe Saldana) fell in love and fought back against the human forces, led on the military front by Colonel Miles Quaritch (Stephen Lang), a burly, blustering marine who sees it has his job to take down the Na’vi.

‘The Way of Water’ fills in some of the gaps between movies––Jake and Neytiri have a family, including three kids of their own (Jamie Flatters as eldest son Neteyam, Britain Dalton as Lo’ak, second-born son and Trinity Jo-Li Bliss as Tuktirey/“Tuk”, their eight-year-old daughter) plus adoptive teenage daughter Kiri, played by Sigourney Weaver. And yes, she has a connection to Weaver’s character Dr. Grace Augustine from the first movie that we won’t specify here. 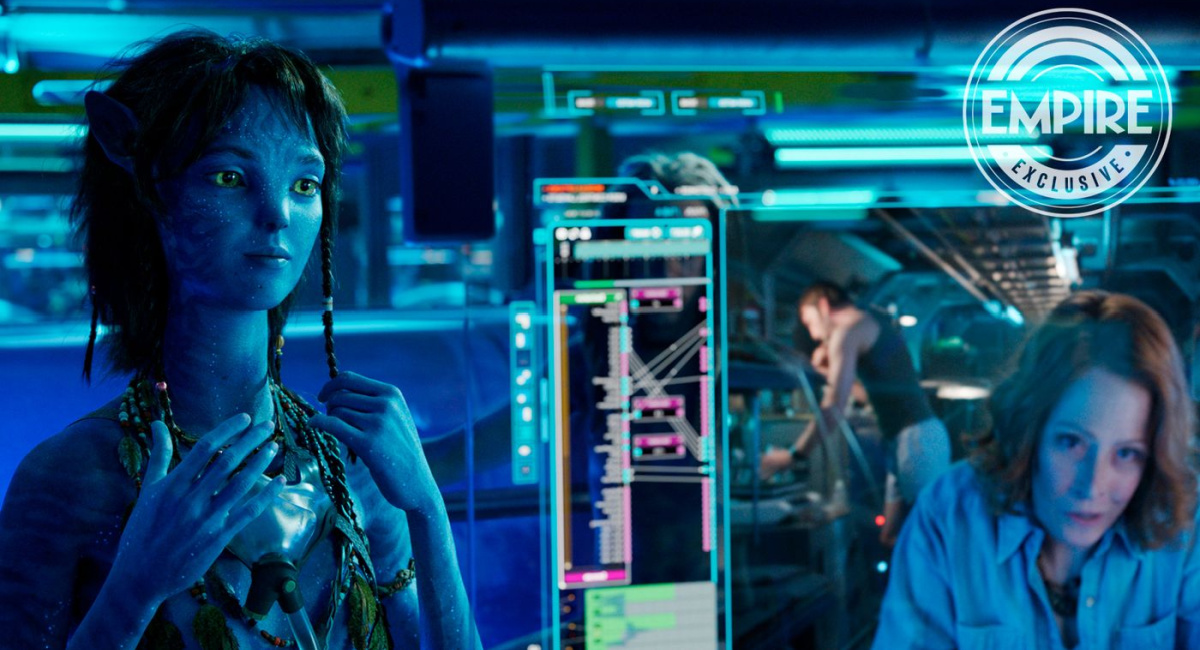 Though the family and their tribe have lived peacefully in the intervening years, humanity––and Quaritch, who was killed by Neytiri at the end of the first movie––are back to finish the job. Soon, Jake and his brood are running for their lives, ending up with the Metkayina clan (led by Cliff Curtis’ Tonowari and Kate Winslet’s Ronal), who live and thrive around and in Pandora’s voluminous oceans.

As for the film itself, it shares both the many strengths and some crucial weaknesses of the original.

On the positive side of things, this shoves the “spectacle” right back into “spectacular”––Cameron and his technological and creative team have pushed the boundaries of what’s possible once again, realizing truly dazzling visuals that will absolutely be held up as groundbreaking and state of the art.

Cameron has plenty of experience of his own in the water, and he brings all of it to making the oceanic scenes look as real as possible. It’s clear that team ‘Avatar’ didn’t spend all this time sitting on their laurels––mammoth amounts of research and development have gone into making the Na’vi look even more lifelike this time (and figuring out clever ways the Metkayina would differ from Jake and Neytiri’s tribe, such as their more powerful tails, which aid in swimming). 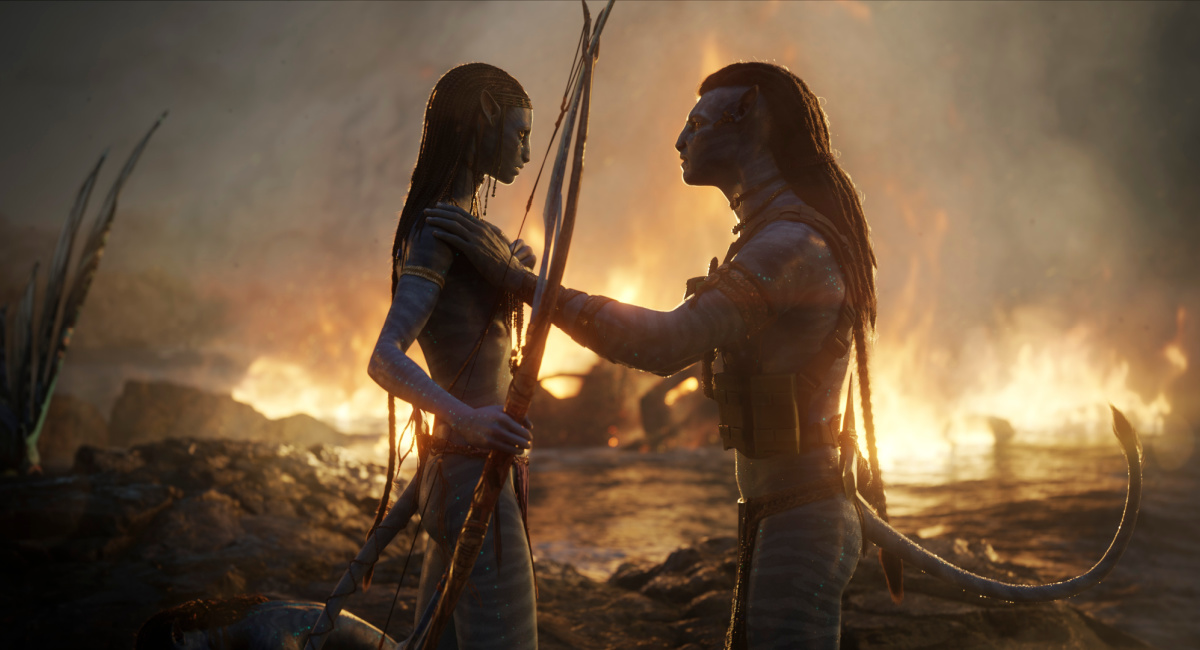 The world around them is brimming with fresh creatures, which are just as incredible as the forest-dwellers from the first run-around. And when the humans arrive to cause problems, they do so in machinery that looks chunky, real-world and immaculately designed.

3D hasn’t really been much of a thing these past few years, but ‘The Way of Water’ uses it in such a way as to draw you right back in. And while the high frame rate still has some issues at moments, this is lightyears ahead of the likes of ‘The Hobbit’.

Yet we did mention the weaknesses, and this first sequel (Cameron currently plans three more) carries them over too. Primarily it’s in the storyline, and despite the director assembling a writers room to help crank out an overarching story and four distinct outings, the characters and plot remain lacking.

With a script for this one credited to Cameron, Rick Jaffa and Amanda Silver (who were part of the ‘Avatar’ sequel creative quorum and also wrote on the likes of ‘Dawn of the Planet of the Apes’), you might have hoped for more polish. Instead what we’re offered are a second helping of basic tropes, easily foreseeable plot turns and embarrassingly base-level initial squabbling between the kids from the tribes before they learn to put aside their differences. 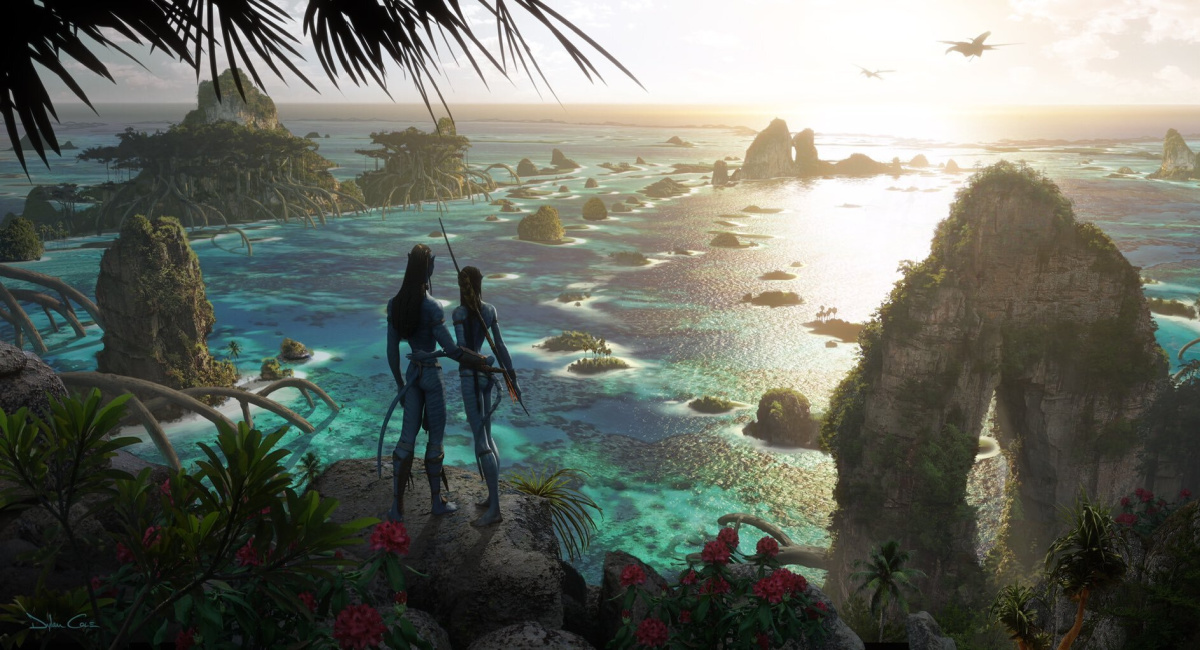 ‘Avatar: The Way of Water’ opens in theaters on December 16th. Photo courtesy of the movie’s Twitter account.

Lang, though he immerses himself in the role despite being big and blue this time, is still saddled with cheesy dialogue and first-draft motivations.

And while the likes of Weaver and the rest of the Sully-Neytiri clan are the focus here, spare a thought for poor Saldana who, aside from some heroic third-act moments, is mostly called upon to worry.

And while the visuals are near-flawless, you could be forgiven, at times when humans are sharing the screen with Na’vi, for thinking that you’re watching the movie that plays before a theme park ride. Then there’s several character and action moments that feel like the director making a greatest hits album––the chatty marines and sturdy tech of ‘Aliens’, the parental worries of ‘Terminator 2’ and the watery finale of ‘Titanic’ all sharing space here.

Those quibbles aside, if you give yourself over to the action, the lavish (virtual) locales and the rush of emotions that Cameron is looking to generate, and is mostly successful in doing so, ‘Avatar: The Way of Water’ will give you reason to celebrate returning to Pandora. 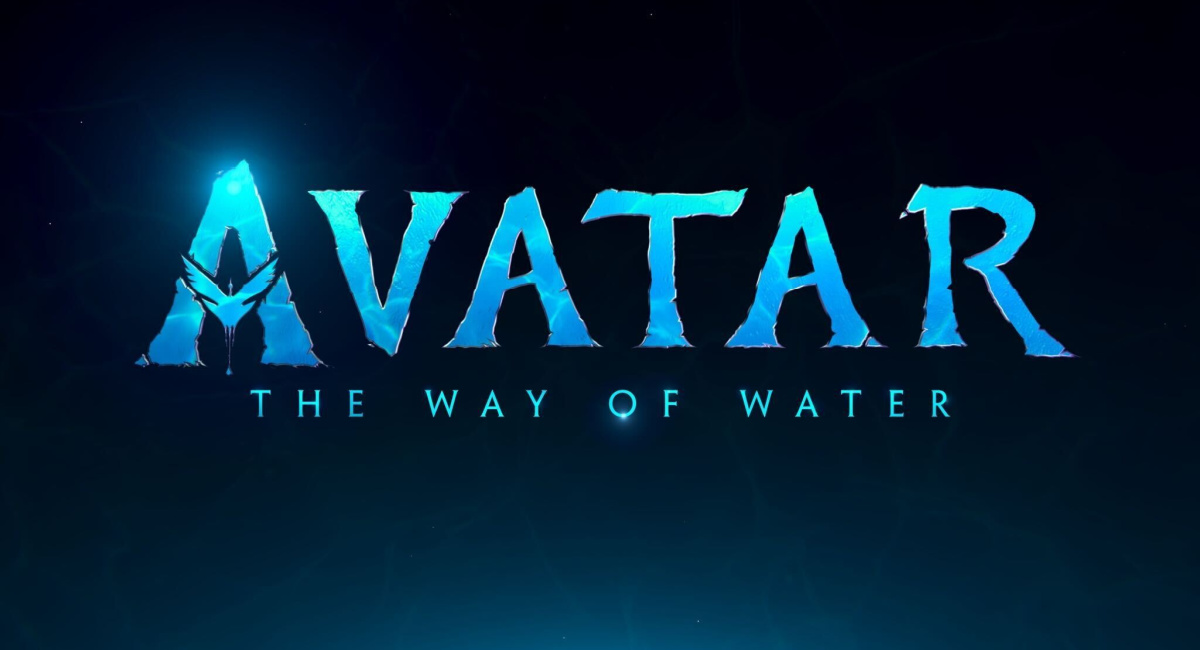 ‘Avatar: The Way of Water’ opens in theaters on December 16th. Photo courtesy of the movie’s Twitter account. 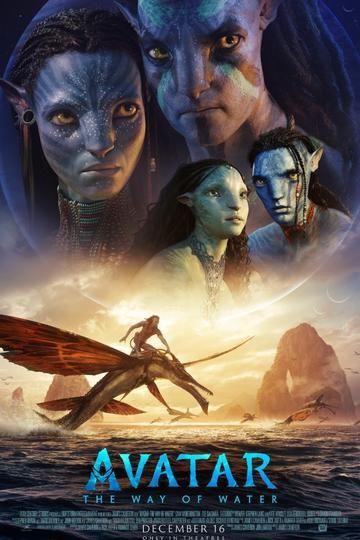