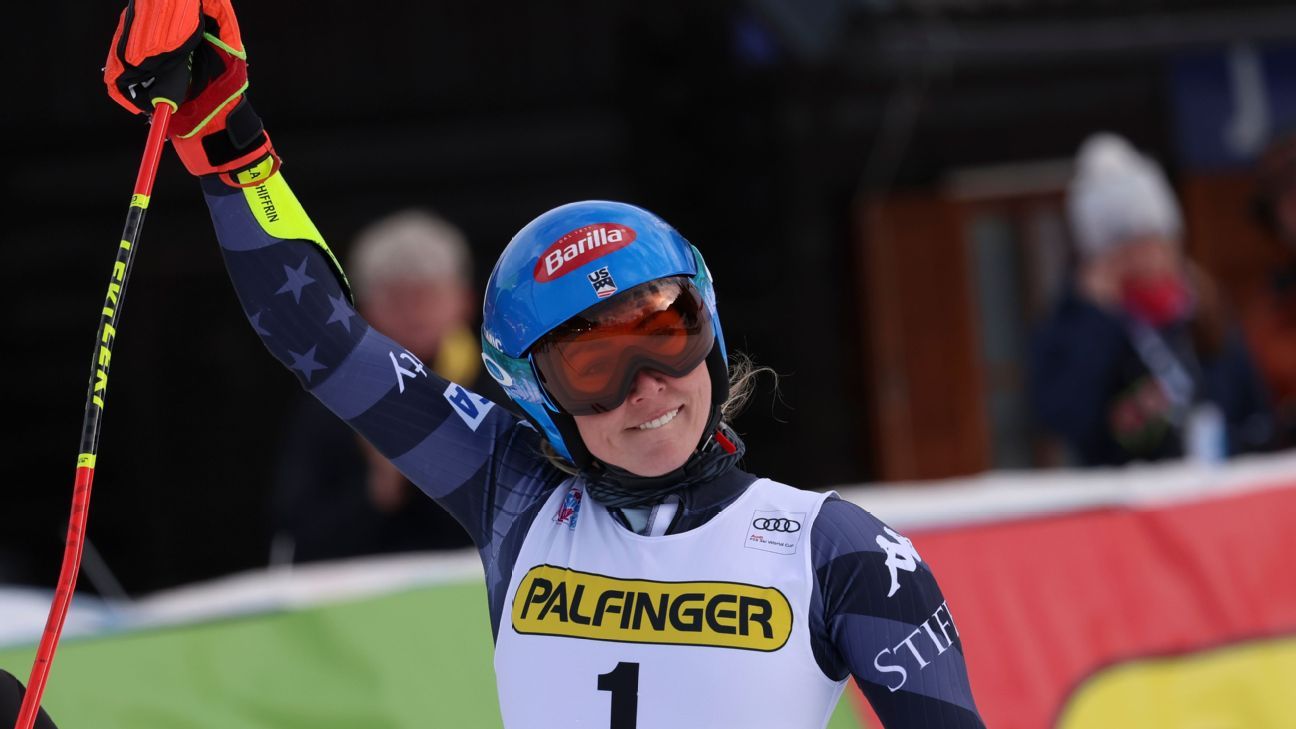 First there was a scream of delight following a serious case of nerves that had been building inside her throughout the day. Then came tears during the playing of the American anthem when her thoughts turned to her father, Jeff, who died three years ago.

“My dad used to be there and taking pictures. Most races these days I’ll think about him and I’m able to kind of refocus,” Shiffrin said. “But when I’m singing the national anthem [it’s different]. It was just before I ever won my first World Cup, he said, ‘You better memorize the words of the national anthem, because if you ever win, you better sing it.’ And so I always think about him when I’m up there.”

Shiffrin led from start to finish to win a giant slalom by a large margin. She can now break Vonn’s mark in a night slalom scheduled for Flachau, Austria, on Tuesday.

“I was so nervous this run. I have a rash on my face I was so nervous,” Shiffrin said. “I don’t know why, maybe a little bit was because of 82. I just really wanted to ski well, and I did.”

Where other skiers struggled on a dark, bumpy and unusually steep course, Shiffrin was able to ski smoothly.

“It was a fight. But it was pretty amazing conditions, and I got a report from the coaches and they were like, ‘It’s really attackable, so just go for it,'” she said. “I’ve been in this position before and I’ve given it away, and today I wanted to fight for it.”

Vonn retired four years ago when injuries ended her pursuit of Stenmark’s record. She wrote in an AP diary that “if anyone is to break my record, I’m really happy that it’s an American.”

Shiffrin and Vonn now each have 20 more wins than the next woman on the all-time list, Annemarie Moser-Pröll of Austria at 62.

While the often-injured Vonn required 395 races for her 82 wins, Shiffrin has done it in 233 races. At age 27, Shiffrin could compete for several more years and win many more races.

“I knew from the very beginning that she would be the one to break all the records,” Vonn wrote. “But to be able to do it at such a young age is really impressive.”

Shiffrin’s achievement comes almost a year after a disappointing performance at the Beijing Olympics, when she competed in six events without winning a medal.

Winning this race, though, never really seemed in doubt.

On an overcast morning, Shiffrin was the first starter and laid down a much more aggressive opening run than either of her two trips down the steep Podkoren course Saturday, when she finished in a tie for sixth.

“I couldn’t ski faster,” Shiffrin said after her first run. “I felt much, much better this first run than yesterday. I had to try to change my feeling from yesterday. It was very good skiing, and I’m happy with that.”

Shiffrin was the last skier to start the second run and increased her advantage at every checkpoint to finish a whopping 0.77 seconds ahead of Italy’s Federica Brignone and 0.97 ahead of Switzerland’s Lara Gut-Behrami.

“She was almost perfect,” Brignone said. “When she’s skiing like that, she’s unbeatable.”

With few American fans at the race near the Italian border, supporters of Slovakian rival Petra Vlhova cheered Shiffrin loudly. A few kids were waving American flags, and family members of Paula Moltzan, another American skier, were on hand wearing USA hockey jerseys.

Shiffrin also moved ahead of Moser-Pröll and Tessa Worley of France with her 17th giant slalom win for second on the women’s career list behind only Vreni Schneider, the Swiss skier who won 20.

New Zealand skier Alice Robinson was the victim of an ugly fall during her second run, crashing face first into the snow, but she quickly got up and skied to the bottom.