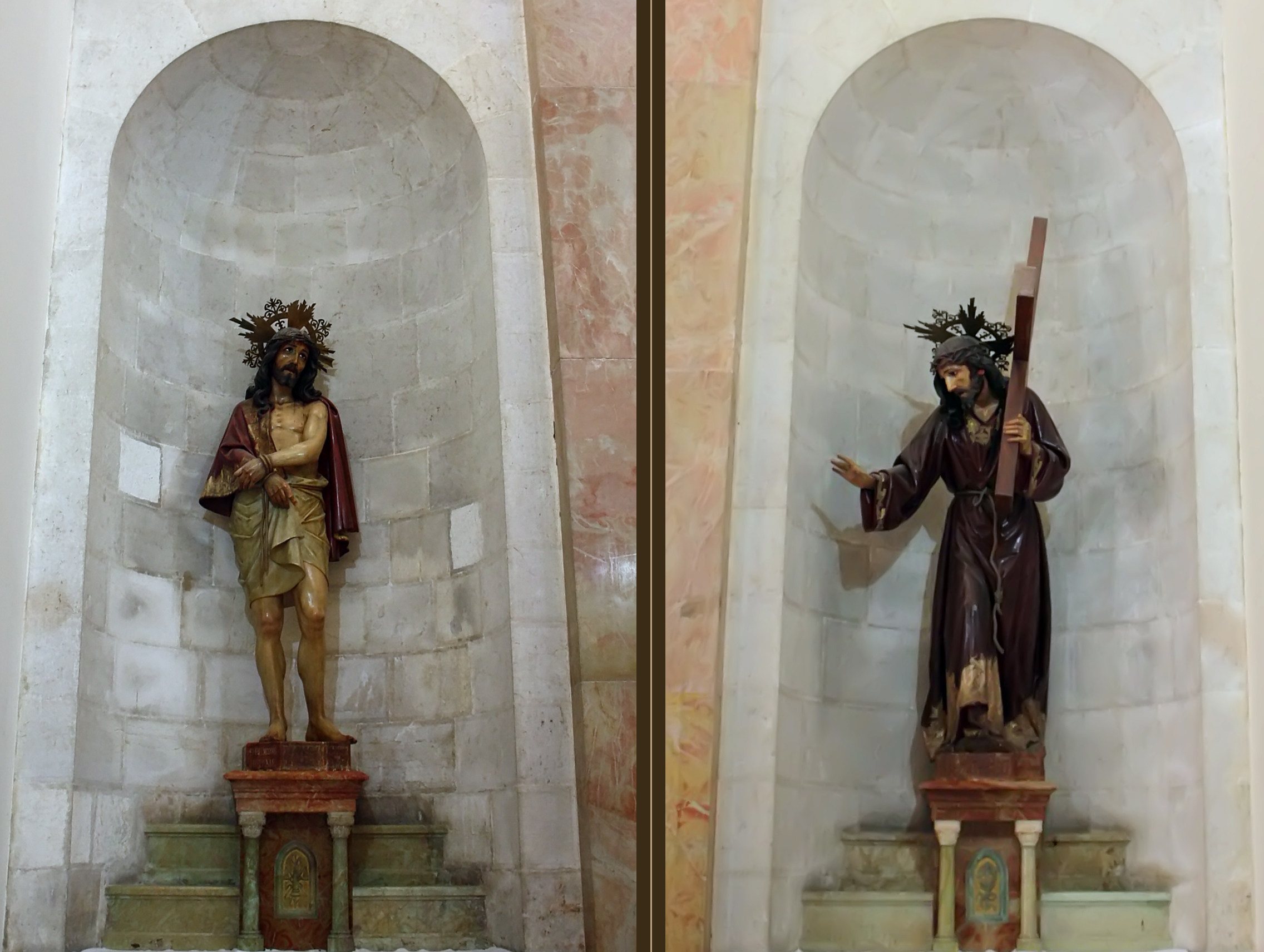 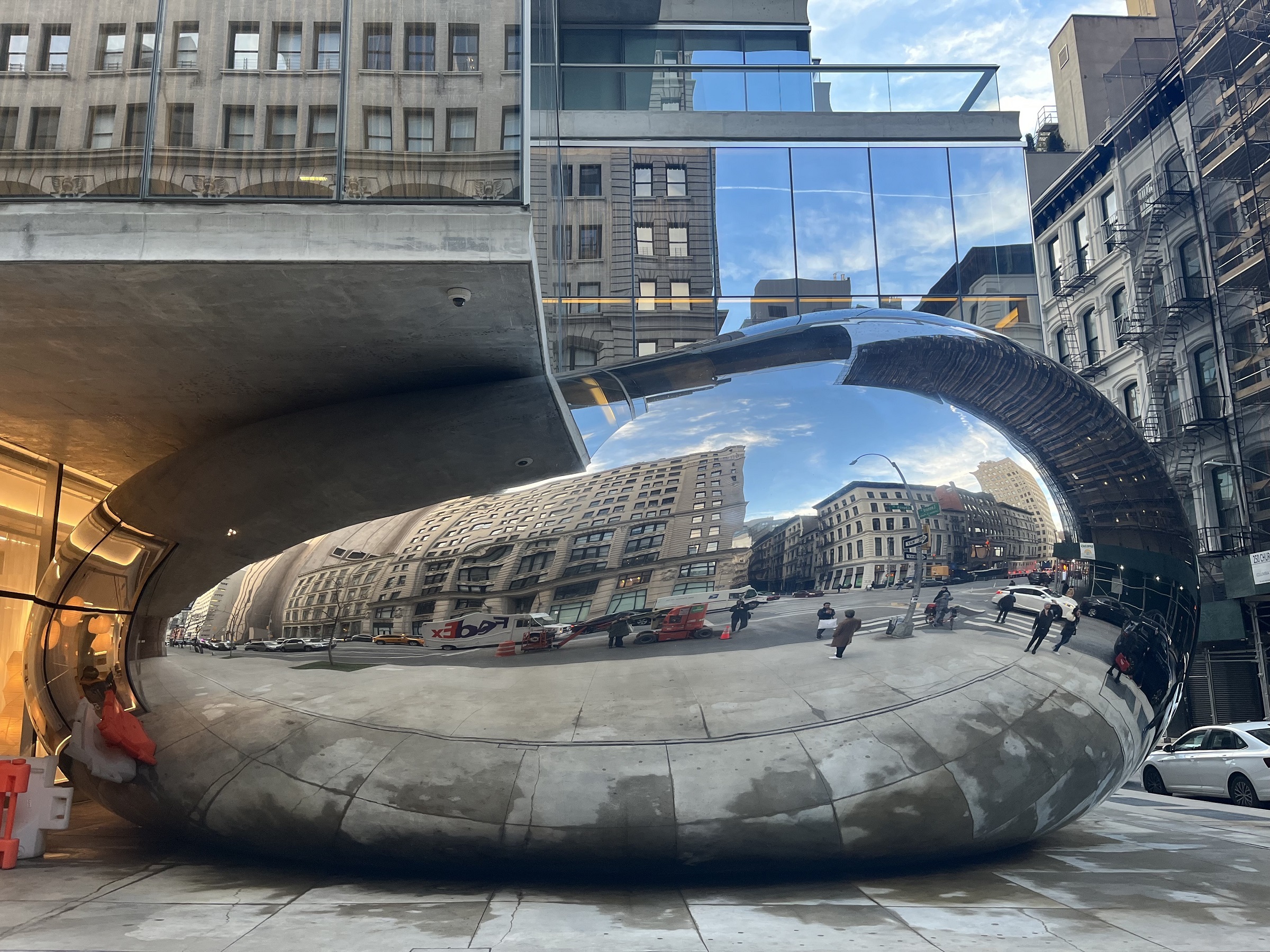 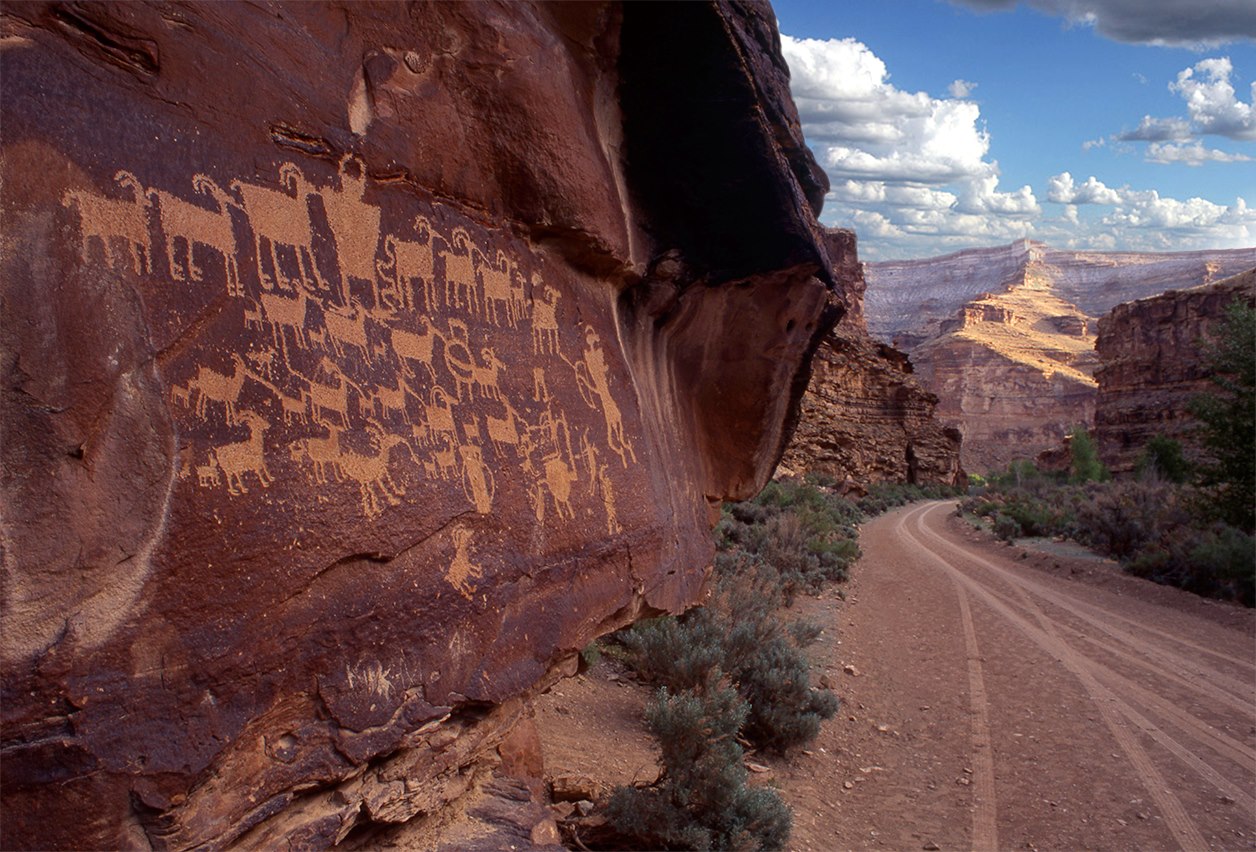 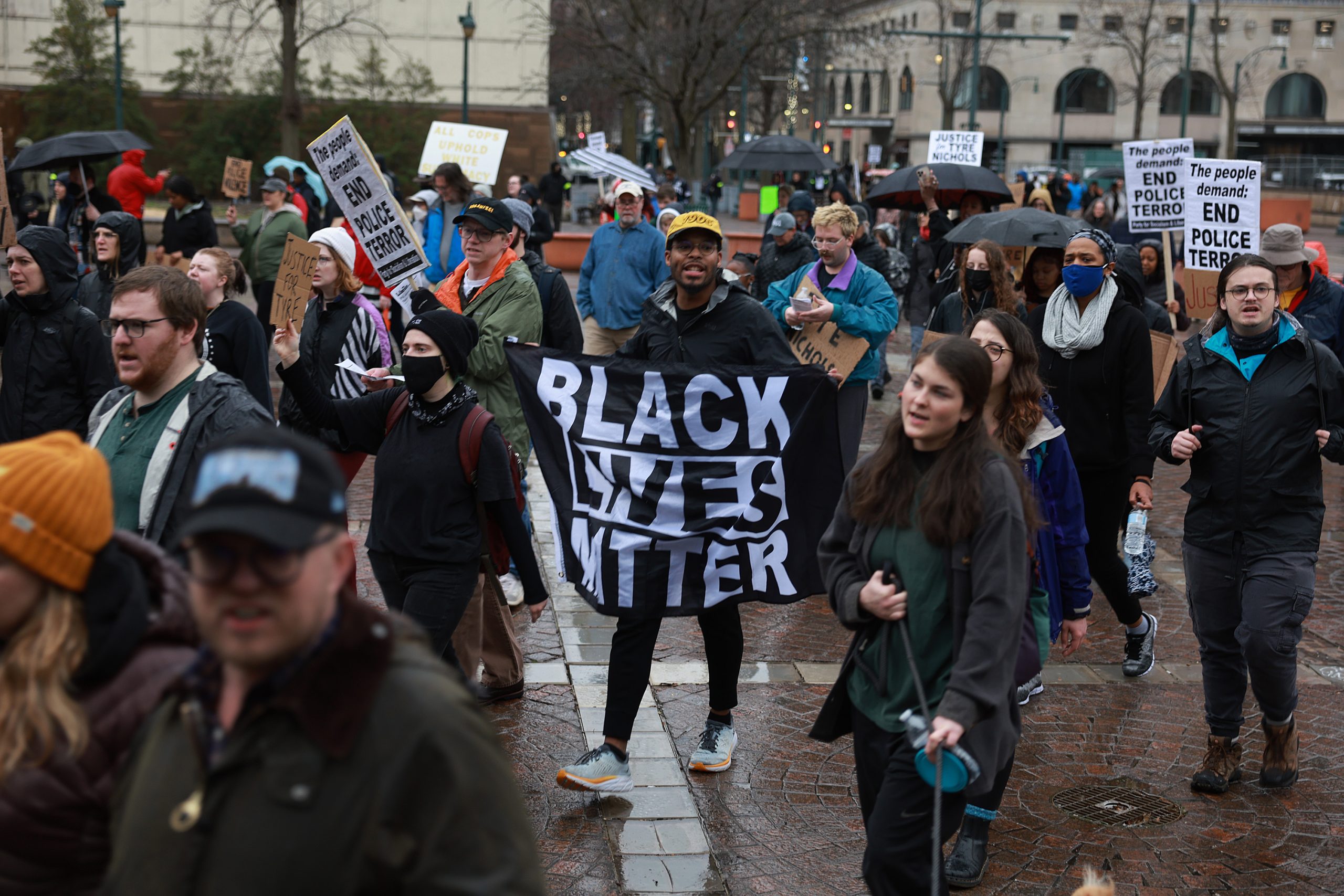 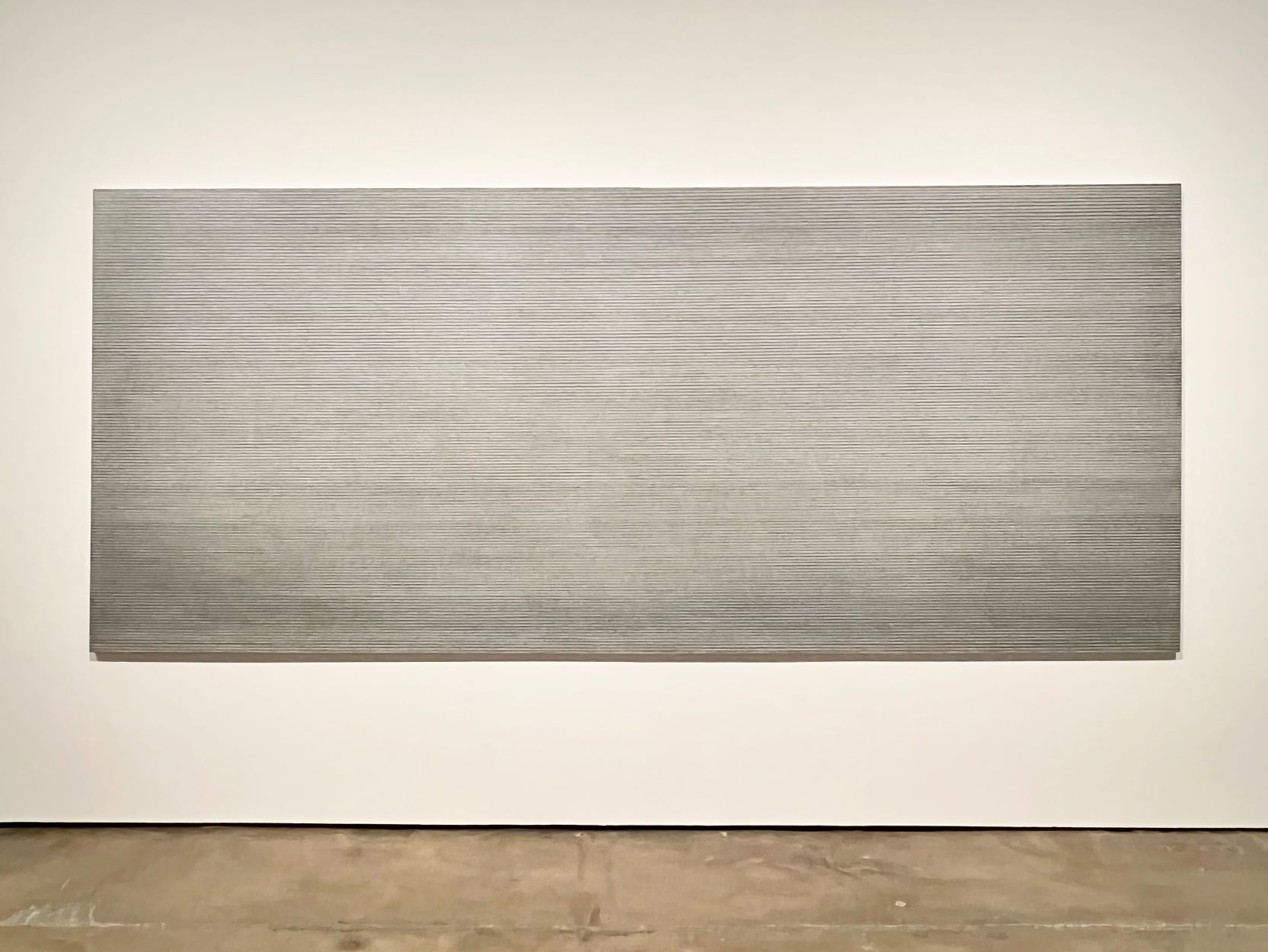 
SANTA FE, N.Mex. — Endless Journey, a survey exhibition of Max Cole’s paintings and works on paper spanning 60 years (1962–2022) is a revelation of the potential for expressivity within strict formal parameters. Cole was born in Kansas in 1937, was raised and educated in the Southwest, and currently lives and works in Northern New Mexico. Though often compared to Agnes Martin, Cole’s work stands apart in that it is at once more earthy and more earthly than Martin’s, whose ethereal works, though rooted in the structure of the grid, appear lighter than air.

Cole’s predominant format of alternating horizontal bands in austere palettes of whites, grays, blacks, tawny raw linen, and the occasional ruddy red, alludes to the vast horizons of the American West and, obliquely, to Native American traditions of weaving and pottery decoration and perhaps Cole’s own distant Cherokee heritage. At the same time, the parameters for her compositions — consisting of regularly spaced horizontal bands of neutral colors, crisply painted, and alternating spaces filled with idiosyncratic, tightly spaced, hand-drawn, near-vertical lines — allow the artist to conjure a sense of eternal human presence in the work. Each tiny, delicate mark reads as a meditative act, imbued with rigorous attention, care, and focus. From a distance, these rows of marks are perceived in terms of value — darker or lighter than the adjacent bands — while, up close, they are an achingly insistent reminder of the artist’s physical presence and painterly actions.

Endless Journey begins with four stunning ink and acrylic works on paper from the 1990s. Their rich, dense, narrow register of black-on-black bands and intimate scale suggests a bank of futuristic television monitors, each broadcasting a unique, vibrating, optically fizzy frequency, inviting one to calibrate one’s vision and attune one’s perception. They are followed by “Micoud” (1979), in which Cole has relied solely upon rows of vertical marks varying in density and spacing. Up close, they allude to a mysterious accrual, precise and finite. From afar, they fuse into something akin to stratified geological matter.

Among the works in this supremely consistent exhibition, there are several standouts. “Nobel Nassau” (1981), the largest, has the advantage of scale and the off-beat element of scribbly, horizontal lines slicing through the solidly painted and the vertical line-filled bands. From afar, the whole transforms into a vaporous, atmospheric cloudscape. “Mesa” (2003) and “Racer” (2000) appear to emit light from the spaces between their tightly arranged black and white bands, an illusion created with bands of unpainted linen, each filled with wavering vertical marks sealed within a clear medium.

Endless Journey is neatly bookended by “Crucifixion” (1962), an early Combine-style painting, and by Cole’s most recent work, in which she uses the Greek cross as a compositional device to further explore vertical and horizontal truths. But it is the horizontally formatted works, which are simultaneously reductive, optical, and infinitely expressive, that exemplify the radical act of establishing and adhering to a methodology that encompasses both the strictures of Minimalism and ritualistic, personal mark-making.