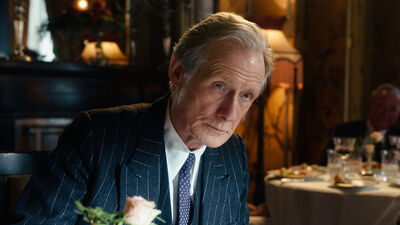 
The post-World War II London drama “Living” puts Nighy at the center of a story: he plays Williams, the head of the Public Works Department, who receives a terminal health diagnosis and, after a period of shock, begins taking stock in his life and essentially trying to be the best person he can before he goes. It’s a role that calls for subtlety, and director Oliver Hermanus has the right leading man.

Williams is an archetypal figure: a bowler-hatted functionary for the state who’s been doing the same thing and living the same life forever. Nighy is 73, old enough to have grandparents who were adults in the 19th century. He seems to understand from firsthand observations that people of different centuries (or parts of centuries) had different energies and ways of comporting themselves than those born 50 or 100 years later. You can picture Williams as someone for whom automobiles and planes were staggering new developments and who has seen so much change in his life that stability has become increasingly important.

He’s a creature of habit. He takes the train into the city, works, takes the train back home, goes to bed, and repeats. His new boss is ineffective, and the department is largely indifferent to the needs of its employees (a group of female workers is making no headway getting a small playground constructed, and Williams notices but doesn’t intervene). The character has been on rails his whole life. The only female employee of his department, Margaret (Aimee Lou Wood), calls him “Mr. Zombie.” When his doctor tells him he has only a few more months to live, his response is an unwitting parody of stiff-upper-lip comportment: “Quite.”

“Living” is a loose adaptation/remake of Akira Kurosawa’s “Ikiru” (aka “To Live“), a post-World War II drama about a Tokyo bureaucrat who goes on a similar journey after a terminal diagnosis of gastric cancer. “Living” isn’t a great movie—it’s a little too subdued at times and has a tendency to fixate on Williams’ mostly unarticulated sadness—but it’s consistently involving.

And Nighy’s performance is such a marvel of quiet strength and internalized complexity that, even though you’re never in doubt as to how Williams will rise to the occasion of his tragic news (a pub crawl, a relationship with a woman that looks like love to outsiders, a decision to intervene to help others make things happen) the events still feel spontaneous rather than telegraphed.