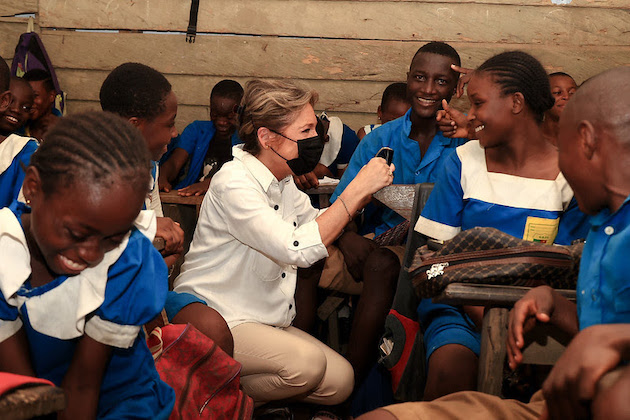 
“My grandma and my grandfather are now washed out in the sea,” says Mario Muschamp, gazing out at the coast near his close-knit Creole community. “You know, their graves are gone. That really hurts.”

This is the reality for the inhabitants of Monkey River, who have watched on, powerless, as their football field, their homes, and even the graves of deceased loved ones, are claimed by the sea.

Man-made activity has been identified by experts as the main cause of the coastal erosion which is devastating the village and causing such deep suffering, notably industrial salt mining and water diversion. The situation has deteriorated to the extent that some members of the community have moved away.

Others, however, have decided to stay and fight, and, in the words of local schoolteachers Audra Castellanos, “put Monkey River back on the map”.

To this end, the Monkey River Watershed Association partnered with the United Nations Development Programme (UNDP) to install one hundred and sixty feet of sand filled “geotubes” in front of the most threatened properties.

Residents are teaming up with UNDP to install the geotubes, massive synthetic sandbags that create physical barriers to wave energy and erosion, and take other measures to slow the disintegration of the shoreline.

“Monkey River Village is one of those coastal communities that we prioritize,” said Leonel Requena, UNDP’s National Coordinator of the GEF Small Grants Programme. “Monkey River’s inhabitants are not responsible for the climate crisis, yet they are the ones that are suffering the greatest loss and damage. What we need is climate justice.”

The story of Monkey River is about a hub of biodiversity where the river meets the sea – but more than that, it is about a community that, like so many others, is joining forces to turn the tide on climate change, with the support of the United Nations.

Since a 2022 United Nations Global Lens video documentary on the community was produced in 2022, yet another home has been claimed by the sea, but the residents who have resolved to protect their village say nothing will wash away their resolve to fight coastal erosion.

“We have been doing our best to try and keep what we have,” said Mr. Muschamp. “I don’t want to see any more graves go to the sea.”