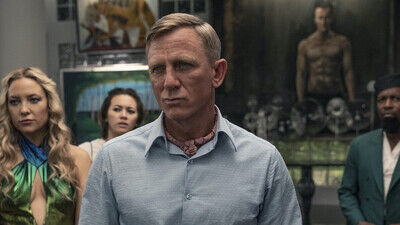 
And it would just be tough for Johnson to top his original film, which was so smart and singular—hilarious, but also legitimately suspenseful. His characters felt richer (no pun intended) the first time around, and his ensemble cast had more to do across the board. “Glass Onion” offers some meaty and meaningful performances, particularly from Janelle Monáe, Kate Hudson, and Daniel Craig, once again doing his best Foghorn Leghorn impression as the intrepid detective Benoit Blanc. And several of his high-profile cameos are a giddy delight. But multitalented actors capable of daring, exciting work, such as Leslie Odom Jr. and Kathryn Hahn, frustratingly go to waste in underdeveloped supporting parts.

Still, if you can catch “Glass Onion” in its one-week theatrical run before it streams on Netflix starting December 23, it’s a film that benefits from the collective energy of an enthusiastic audience. Plus, it’ll help you avoid any spoilers that might dribble out over the next month. So: here goes!

Edward Norton plays Miles Bron, a billionaire tech bro who isn’t nearly as brilliant as he thinks. Once a year, he amasses his tight-knit clique—a disparate group of people who smugly refer to themselves as “The Disruptors”—for a lavish, weekend vacation. This time, he’s shipped them all multilayered puzzle boxes (an early indicator of the kind of elaborate production design Rick Heinrichs has in store for us) as a tease for the murder mystery he’s planned at his isolated getaway. His mansion manages to be gaudy yet chicly minimalist at once, an indication that he has no recognizable personal style of his own.

His guests include Hudson’s model-turned-influencer Birdie, who keeps getting into trouble for tweets she doesn’t realize are racist; Hahn’s married mom and no-nonsense politician Claire; Dave Bautista’s brash men’s-rights YouTuber Duke Cody and his scantily clad girlfriend, Whiskey (Madelyn Cline, finding surprising shading); and Odom’s beleaguered scientist, Lionel, who endures urgent faxes from Miles at all hours of the day and night. Also receiving an unexpected invitation is the jovial and fashionable Benoit Blanc, who welcomes the fun of this challenge, as he seems at sea between cases. Once again, it’s truly a joy to watch Craig get goofy.