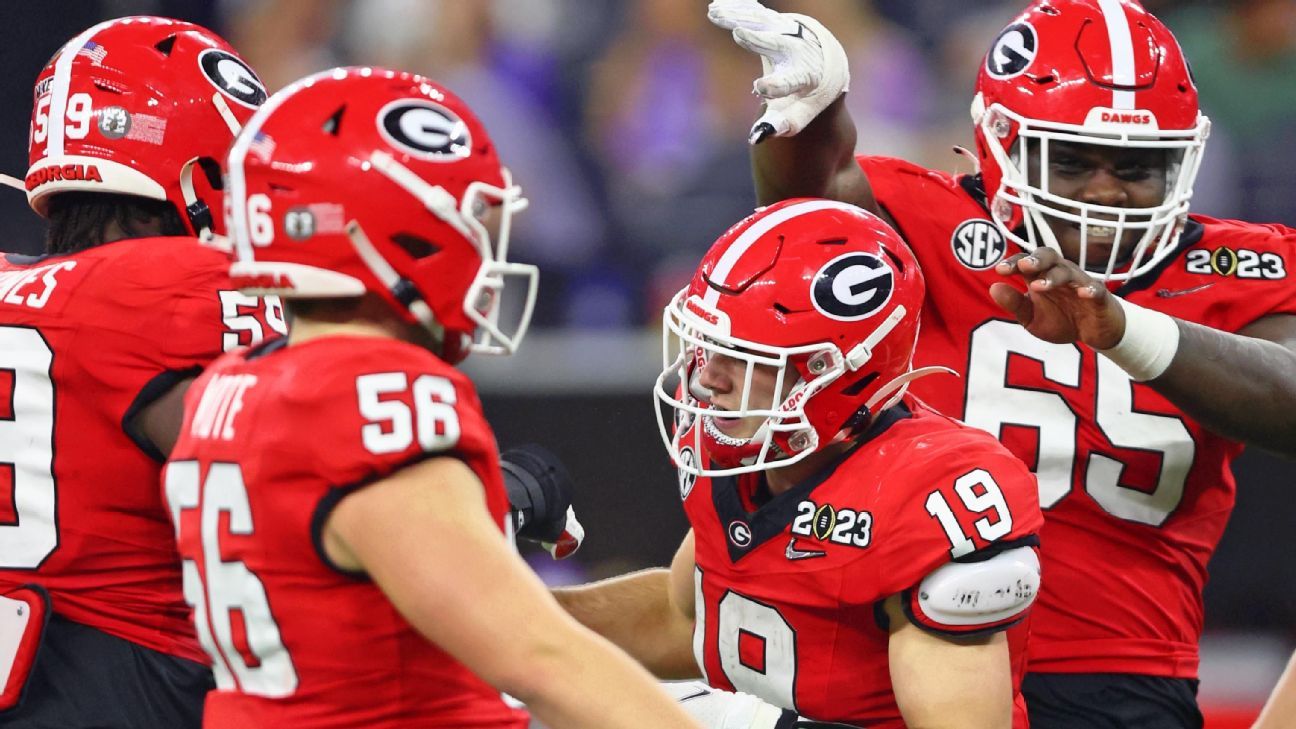 INGLEWOOD, Calif. — There was no epic comeback and no miraculous finish because there was no chance — not when the No. 1 Georgia Bulldogs asserted their sheer dominance from the onset and sucked the storybook ending right out from under No. 3 TCU with a 65-7 win in the College Football Playoff National Championship game at SoFi Stadium on Monday night.

In a game that featured two Heisman Trophy finalist quarterbacks, Georgia’s Stetson Bennett piled onto his legacy, leading the Bulldogs to back-to-back national titles for the first time since Alabama accomplished the feat in 2011-12.

And they made it look so easy.

With 13:25 left in the game and Georgia sitting comfortably with a 52-7 lead, Bennett unhooked his chin strap, pulled off his helmet with a smile and went to the sideline, where he was greeted with hugs and high-fives from coaches and teammates for capping his career with the sport’s biggest prize. Bennett accounted for six total touchdowns in the victory, four rushing and two passing.

Georgia beat this scrappy but talented TCU team every which way, using its powerful tight ends for big plays in the passing game, finding holes for long bursts in the running game, and pushing through the Horned Frogs’ offensive line to pressure TCU quarterback Max Duggan into costly mistakes. He threw two interceptions in the first half, including one with 36 seconds remaining that led to another Bennett touchdown pass two plays later, and a resounding 38-7 halftime lead for Georgia. It was the largest halftime lead in a national championship game since the 2002 BCS, when Miami led Nebraska 34-0.

Georgia, having the experience of winning it all just a year ago, looked comfortable and calm, while the Frogs, who finished 5-7 a year ago and were picked to finish seventh in the Big 12, appeared wide-eyed and out of sorts under first-year coach Sonny Dykes.

Georgia closed as a 13.5-point favorite, the largest favorite in a national title game since 1998, but TCU, which defied the odds on a weekly basis, had won five games when trailing after halftime this season while capturing the nation’s attention with its funky Hypnotoad and underdog status along the way.

This wasn’t about a fairytale ending. No, this was about what’s beginning at Georgia under Kirby Smart.

Since 1990, the only other schools to win back-to-back national titles are Nebraska (1994-95) and USC (2003-04). The comparisons between where Georgia is heading and what Alabama has done began last season, when the Bulldogs defeated the Tide to win their first national title in 41 years. Now that Georgia has won consecutive championships, there’s an undeniable tilt in the balance of power between the two programs. The debate will heighten on whether Georgia already has usurped the Crimson Tide, who have won six national titles in 12 seasons under Nick Saban, as the most elite program in the SEC.

Smart, who spent nine seasons as Saban’s defensive coordinator at Alabama before he was hired at Georgia, took Saban’s championship blueprint with him to Athens. He has now won five SEC East titles, two SEC championships and two national titles. He has lured in seven top-three signing classes and they were on full display Monday night.

For much of the first half, Bennett was throwing to open receivers without a defender in arm’s reach. He threw only four incompletions and accounted for two passing touchdowns and two rushing touchdowns in the half.

Georgia outgained TCU by 233 yards in the first half, the largest margin in any half of a national championship game since at least the 2004 season. The Bulldogs were shattering national championship records left and right. It was an utter meltdown for the Frogs, who were trying to win the program’s first national title since 1938.

When TCU knocked off No. 2 Michigan in the CFP semifinal at the Vrbo Fiesta Bowl, it continued to convert critics into believers. It only took one half for Georgia to make it clear, though, that the gap between the SEC’s most elite program and TCU was as large as the score indicated.

Midway through the third quarter, Georgia had run as many plays (45) as it had points, which explains why the team’s fans in SoFi Stadium seemed as comfortable as the lead they were staring at. Just about everything collapsed for TCU, including its defense in the first half, which allowed its most points in a first half since giving up 38 to Oklahoma in 2017.

Entering the second quarter, Georgia’s players were waving their arms on the field and their white towels on the sideline, gesturing to the fans to get into the game. They did it again at the start of the second half. Georgia’s 17 points were the most scored in the first quarter by a team in a BCS or CFP national championship game. Even with the resounding start, though, there was still a sense that TCU would put up a fight like it always does, and the first quarter was far too early to write off the Frogs. That happened in the second quarter.

TCU carved its identity this season through its relentless ability to find ways to win, but it was an insurmountable task against a program that has forged its identity as the best team in the country.