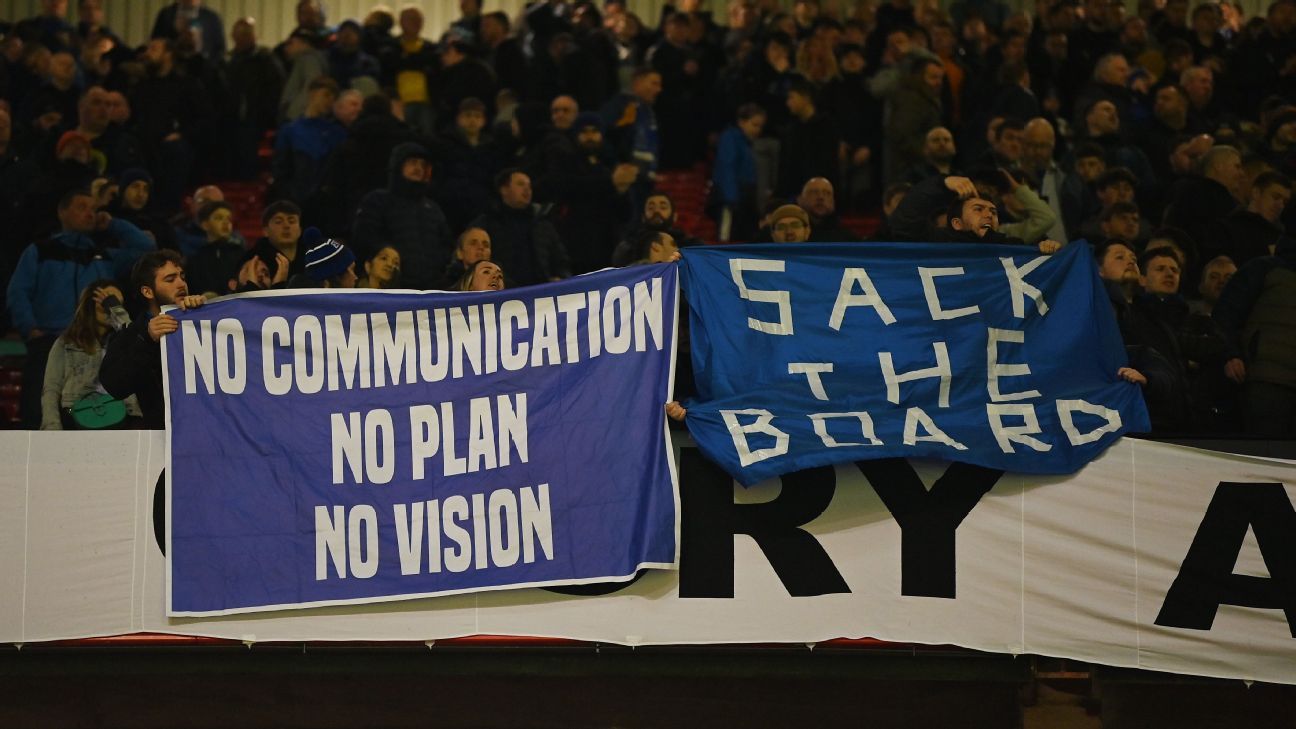 And then the Everton managerial roulette wheel will spin again. Marcus Rashford‘s penalty, five minutes into stoppage time at the end of the game, confirmed a 3-1 victory for United (stream the replay on ESPN+ in the U.S.) and progression to the next round, but the scoreline flattered Erik ten Hag’s team.

United deserved to win, yet Everton, who have now won just once in 30 visits to Old Trafford, pushed them all the way. If not for VAR intervening to rule out a Dominic Calvert-Lewin goal for offside on 74 minutes, Lampard and his team could have earned a replay at Goodison Park.

Everton are one of those teams that don’t get the breaks, though. If it can go wrong, then it usually does for Everton. Just ask Conor Coady, the centre-half who equalised for Everton in the first-half before restoring United’s lead when he accidentally diverted Rashford’s cross into his own net.

In English football, Everton are arguably the most unsuccessful big club in the game. They probably have few rivals for that unenviable title throughout Europe, too. Everton haven’t won a trophy of any kind since 1995, when they beat United in the FA Cup final. A 28-year drought without silverware should be unthinkable for a club of Everton’s pedigree, but since 1995, they have reached just one major final, losing the 2009 FA Cup final against Chelsea.

Only United (20), Liverpool (19) and Arsenal (13) have won more league titles than Everton’s nine and they are a club with such a deep and passionate fan base that they were backed by 9,000 travelling supporters at Old Trafford. It is only 35 miles from Goodison to Old Trafford, but that kind of commitment in tough financial times when the team is losing almost every week is to be admired.

Yet despite all of their advantages — history, support and a hierarchy that has spent over £600 million on players since 2016 — Everton continue to lurch from one slump to another. Since Jurgen Klopp arrived at Liverpool in October 2015, 12 (twelve!) different managers have taken charge of Everton. During that period, David Unsworth and Duncan Ferguson have both had two spells at caretaker manager, while elite coaches including Carlo Ancelotti, Rafa Benitez and Roberto Martinez have tried and failed to turn the club around. Sam Allardyce, Ronald Koeman and Marco Silva have also been chewed up and spat out by the Everton experience.

Lampard is merely the latest manager to discover that managing Everton is close to being an impossible job. He has only been in charge since last January, but already his future is on the line. This was his 22nd defeat in 42 games as Everton manager, so if the axe falls, the former Chelsea boss won’t have too much cause for complaint.

“That’s not under my control, so it’s not for me to focus on that,” Lampard said when asked about his job security. “I don’t want to talk on that, I just want to focus on the performance of my players.”

But while the Everton supporters have grown tired of what they perceive to be the club’s mismanagement, their anger is not directed at Lampard. At the end of the United game, many fans stayed behind to applaud Lampard and his players, at the same time as chanting “sack the board” and unveiling banners calling for chairman Bill Kenwright to leave.

Kenwright has been chairman since 2004 and he was greeted as a homecoming hero when he bought a majority stake in the club in 1999. But the 77-year-old theatre and film producer is regarded as a symbol of Everton’s decline and the fans want him out, despite the real power at the club lying with Farhad Moshiri, the majority owner. Since Moshiri took charge in 2016, Everton have hired and fired all those managers and spent fortunes on players, but few of the decisions have paid off.

While traditionally smaller and less historic teams such as Leicester City, Burnley, Brighton and Brentford have over-performed in the Premier League — Leicester won the title in 2016 — Everton have been the outlier. They have been the club that has only found consistency in terms of over-promising and under-delivering.

And here we go again. It is the first week of January and Everton’s hopes of success are over for another year (they were eliminated from the Carabao Cup with a 4-1 loss at Brentford in November.) Success from this point on will only be about Premier League survival. Everton have not been relegated from the top division since 1951, but they narrowly avoided the drop last season. They are now in the relegation zone and face a huge game against bottom team Southampton next week which Lampard simply has to win, if he remains in charge long enough to oversee a much-needed victory.

But Lampard could take positives from the defeat at United. “The reaction from the fans at the end spoke volumes,” he said. “They saw that we deserved a result and it’s good for the players to see. It showed the fans will respect anyone who gives everything for the club.”

Lampard is clearly giving his all. He is honest and passionate about the team, something the supporters have acknowledged, but that isn’t proving to be enough at Everton. It is a club that is going around in circles and it is in a tailspin that better and more experienced managers than Lampard have been unable to pull them out of.