“Unlike the Industrial Revolution, the Biomimicry Revolution introduces an era based not on what we can extract from nature, but on what we can learn from her,” explains Janine Benyus, the founder of the Biomimicry Institute. And it seems that biomimetic architecture will be one of the keys to that learning process, judging by projects such as the Tower of Life proposed by an international architectural consultancy as a glimpse into the future of construction.

The building, a gigantic structure that aims to become a landmark of the city of Dakar in Senegal, draws its inspiration from the baobab, a symbol of that African country. Its terracotta color evokes the simple mud constructions of the region and the tonality of its landscapes. However, it also treasures the technologies of tomorrow.

In this article you will learn about:

What is biomimetic architecture?

If you have read any of our articles on biomimetics or biomimicry, you will know that it is a discipline that emulates and replicates principles and behaviors of the natural world, applying them to technological solutions. Architecture, as seen in the example of the sunflower house, is one of the most fertile grounds for this approach. A building based on the premises of biomimetic architecture usually bears some of these characteristics:

Biomimetic architecture is nothing new. In fact, Filippo Brunelleschi, the architect of the Florence Cathedral, designed his iconic dome inspired by eggshells, which allowed him to create a lighter and stronger structure. The main difference of contemporary biomimetic architecture is that today it has an infinitely larger repertoire of technologies, as we see in the Tower of Life.

The Tower of Life: a self-sufficient ecosystem

Envisioned by a Lebanese architectural firm, the Tower of Life lives up to several of the above requirements.

In energy terms, it can generate more energy than it consumes. Firstly, this is achieved through energy efficiency, as the earthy exterior structure helps to generate a microclimate through its perforations. Secondly, it uses photovoltaic glass to generate electricity and a rainwater collection system that goes to a cistern in the foundations. At the base of the building there is also a bioreactor that transforms organic waste into energy. 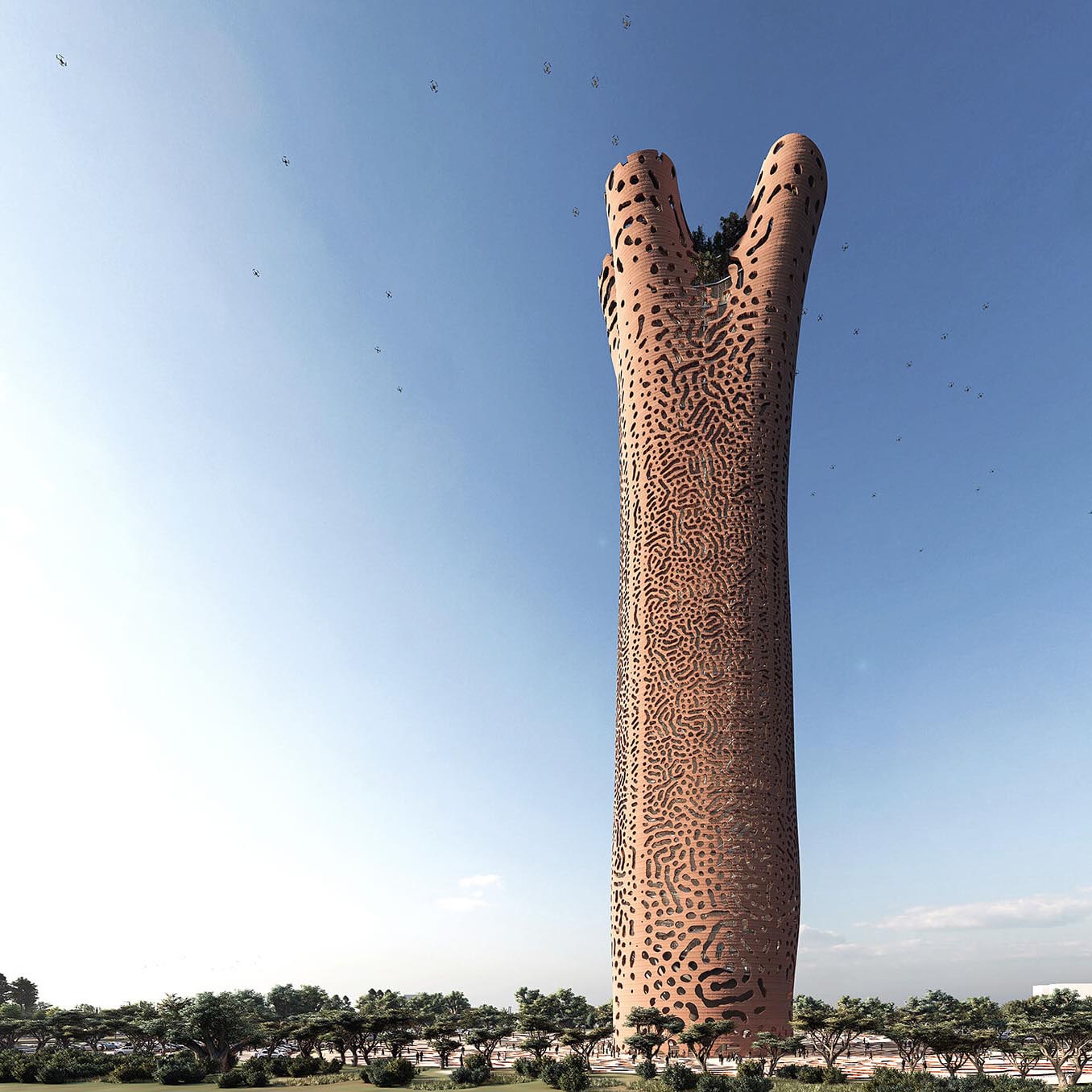 The negative carbon footprint is achieved through these energy systems, but also thanks to the use of 3D printing with locally sourced raw materials, thereby reducing energy needs for transportation and manufacturing. Thus, the entire exterior structure is built with local soil and additive printing.

The imitation of organic forms is reflected in that same exterior structure, which uses reaction-diffusion patterns, a mathematical model that determines the distribution of spots in fish or animals.  As pointed out, these openings modulate the light that reaches the interior of the building. They are also applied to the entire surrounding site, since a museum is planned for the basement, which will use the openings as skylights.

More specifically, the Tower of Life will reach 290 meters in height and will have vertiports for drones and helicopters. The upper zone will also house a forest to regulate temperature and oxygen levels. All of this will be monitored by a series of sensors, which will detect everything from moisture levels to air quality, temperature and occupancy levels in each space.

Other examples of biomimetic architecture

The Tower of Life is one of the latest examples of this trend, but there are many others. Although not all of them comply so strictly with biomimetic precepts, there are many cases in which nature has guided the design of revolutionary buildings.

If you found these examples of biomimetic architecture interesting, you can expand your knowledge of this discipline with articles like this one, which explore energy efficiency approaches adopted by some living creatures.