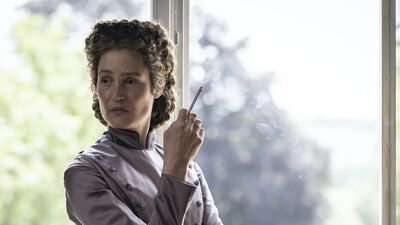 
George MacDonald’s The Light Princess book is a big theme throughout the film. I found that story and the various iterations really fascinating. I love how you integrated it into the film.

There was one line of that book that I had written down somewhere. I kept a notebook where I would just write down sentences from books, movies, or whatever sentences or quotes that I found beautiful and inspiring. In one of those notebooks, there was one sentence out of this book, a long phrase, but I didn’t know anymore where I found it. I just had that sentence in my mind when writing the script. I don’t even know why, because I wrote it down long ago, and then I just googled the entire phrase and found the book, and I had not even known it was out of the book. Then I read the book and found it very interesting how many parallels there are to this story, which was already far in development.

So it was not from the beginning of the writing process; it was later, almost when I was done with the script. There was even much more of it in the script, but then we found it too complicated with the English text, and so we let that go. But we still kept it in the images. My art department copied the original drawings in the book.

There are all these women in her life, the ladies in waiting, the attendants, the women in the asylum that she visits, and even her daughter. They are all reflections of how women are supposed to be in this society. I’d love to hear your thoughts on how you created all these different women and what you were hoping to show with them.

Everyone in the film and everyone in the system has to fulfill a lot of expectations. That’s why I also put in the beard of the Emperor, which he takes off because he was a small man. He became an emperor when he was very, very young. So I think he also had to do something to impress people. He also had to play a role, and I thought that it was important to show that everybody had to please people. But especially, of course, the women.

For the women, it was so clear that they were not supposed to decide or do anything really, aside from what was expected of them. Be nice, kingdom beautiful, and so on. I found it interesting reading the historical material and the diaries of her ladies-in-waiting and her daughter. They never questioned the system they lived in. They never questioned the hierarchies. Then being below the Empress, their position was so clear to them.