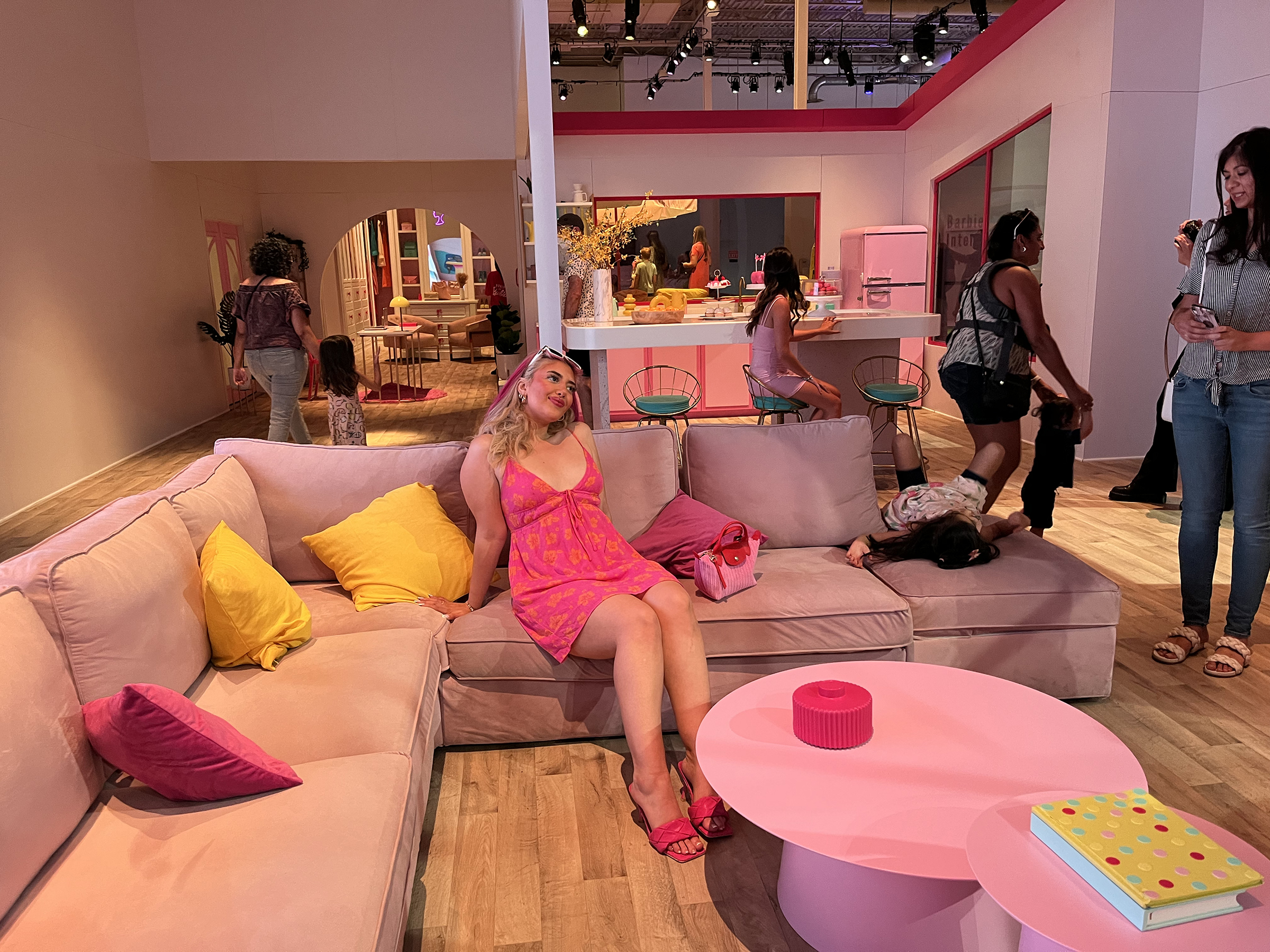 
TORONTO — Early in my daughter’s life, as I floundered with the now-ruptured contours of my days, an older parent friend reminded me to keep doing the things I enjoy, like visiting galleries and museums. Just bring her along in a stroller.

World of Barbie felt like a Venn diagram of our summary interests. My bemusement at bringing Barbie’s Dreamhouse to life as an immersive experience could be explored in an indoor, air-conditioned play activity. My daughter, however, has no interest in dolls; she doesn’t care that Mom owned a Totally Hair Barbie. Greta Gerwig’s upcoming Barbie film? Absolute indifference.

Still, I should write about this and pitch it to Natalie, my editor at Hyperallergic.

It wasn’t until late August, after a 45-minute car ride outside of Toronto, that my then 10-month-old daughter and I found World of Barbie — near Square One mall, in a Mississauga showroom. Wheeling the stroller through the main entry’s modern white-walled archway felt like stepping through Oz, but the Oz that is Barbie: a James Turrell Ganzfeld-like diffusion of hyper-femme magenta pink.

World of Barbie unboxes her earthly abodes and accessories: the Dreamhouse, the Camper Van, and even a space shuttle. Designed by Kilburn Live, a “global leader in live branded entertainment,” a big budget was behind its kid-friendly thrills — the Dreamhouse’s ball pit pool, a well-monitored “Malibu Beach” indoor rock climbing wall — thanks to its partnership with Mattel, the toy company that manufactures Barbie.

It’s a step and repeat display of Barbie’s careers and lifestyles: fashion editor, astronaut, president, and influencer. An Interior Design Studio features a Memphis-style kitted boudoir and workroom, evoking girl-boss artifice. Self-broadcasting expressions is emphasized, as indicated by a TV studio anchor desk and recording-cum-karaoke booths that allow kids to jam to Katy Perry’s “Firework” or One Direction’s “What Makes You Beautiful.”

The early-2010s pop hits are surprising, right? Not if you consider who else is attracted to the World of Barbie: Barbiecore TikTok influencers and millennial moms — who, like me, want to relive, in life-sized format, their Barbie nostalgia.

August 29, 2022: A heads up I’m working on a quick contract, so filing my story in early September won’t be possible.

The interactive exhibition’s World of Barbie Museum has the most ambitious institutional heft. Archival materials in wall-mounted vitrines extoll the doll’s six-decade history. They are positioned high, like cathedral glass, to strike awe in audiences at Barbie’s aspirational being.

The Dreamhouse’s first iteration is recreated in all its humble, midcentury wood dorm-room glory, encouraging kids to fling themselves across the single cot bed and gaze into the empty pink closet. I don’t get why it’s empty. But when the Barbiecore zeitgeist begets a Taschen-like “architectural survey” coffee table book, you’re reminded yet again: IP pays for this shit!

The museum’s didactics are illogical: “Can you match Barbie’s milestones with technology milestones?” A suited-up 1992 Barbie for President is somehow connected with the moment when the first SMS text message was sent, whereas the 2016 landmark “new body type” Barbies coincide with the rise of consumer drones. Your takeaway, of course, is that Barbie is singular. The kids that pass by are encouraged, with this historical context, as well as the many selfie closet set-ups and broadcasting studios, to position their subjectivity adjacent to this objectification.

September 21, 2022: My sincere regrets, but I’ll be delayed in delivering this review.

Over the past four months, I have made many attempts to write this review. But it has been interrupted by feedings, playtimes, wake-ups, vaccines and flu shots, bath times, middle-of-the-night feedings, a one-year-old birthday, a punishing regression, a mind-numbing weekly Zoom class, and a consulting work contract. I’m a full-time parent working 12-hour unpaid days, within which I have to fit my sporadic compensated work.

I work in short bursts — thanks to the caregiving support of my partner, sister-in-law, and mother — over a protracted period punctuated by my daughter’s 24/7 needs. If you’re going to read my review about a Barbie immersive experience, you’re going to deal with the scutters of a burnt-out mommy brain.

October 14, 2022: I will probably take you up on an extended deadline. My daughter is sick.

When we visited World of Barbie, my daughter had to be pushed around in a stroller and found the most joy in pulling herself up and obsessively toddling around a bench in the Dreamhouse’s courtyard. (She started walking less than a month later. Thanks, Barbie!)

She had no interest in its exhaustive selfie-baiting photo ops. So it’s the memories I have of the adults in the space — pushing their kids to pose and smile or doing it for themselves — that linger. This, of course, includes me. Somewhere between Ken Avenue and Skipper Street, I succumb to a photo op with my 10-month-old in the Memphis-style Interior Design Studios. As we squeezed together on the settee in Barbie’s boudoir, I could feel the prickling impatience of the mom behind me, waiting for her older daughter’s turn, silently judging as I prolonged the wait even further by lugging my kid out of the stroller onto the couch. It didn’t help that my daughter didn’t even attempt to pose: She kept trying to climb off, transfixed by the neon wall clock — because, yes, postmodern deconstruction is overwhelming! — vindicating the mother’s impatient ire.

Then there was the dead-eyed stare of an influencer I encountered in the Dreamhouse’s walk-in closet, which felt like a knowing nod to Carrie Bradshaw’s walk-through thanks to the open (non-functioning) Apple laptop nearby.

And just like that … I wanted to know what this blond — like Elle Woods in her pink baby doll dress and matching mules — thought of Barbie’s life-in-plastic. Thinking I caught her eye, I almost asked, “Is it fantastic?” Alas, she wasn’t looking at me, but at the friend filming her with a phone. She focused on her living room sectional photo op, even as a six-year-old kept jumping on the cushions next to her, jeopardizing the shot.

Barbie is pink and sparkly! Slightly malevolent, but fun! World of Barbie has missed an opportunity to genuinely reflect on what Barbie means today. There’s a low bar for children’s entertainment; Kilburn Live apparently saw little point in presenting Barbie in all facets of her embodiment and identity. This is a shame — what would it look like if we treated children as an audience that is capable and intelligent?

When I think about where my daughter is considered capable and intelligent, one of the nearby EarlyON family centers we frequent comes to mind. These are unique to Ontario, where a parent/caregiver can take newborns to six-year-old kids to a free drop-in family center. The spaces are a lifeline where she and I can self-discover, at our own pace, what it means to be girlie, to play with dolls, and also to be motherly.

The EarlyON I visit the most is a 10-minute walk south of my house. It is an inviting, bright classroom with different play spaces, recognizing the varying needs of different age groups. When I started taking my daughter, she stuck to the playmat area containing a floor-level Montessori mirror with open shelves filled with toys like rattles and balls. As she’s gotten older, she’s graduated to the playing house, where she can find several plastic baby dolls of various ethnicities. Right now, my daughter likes to grab an empty carton of half-and-half from the playhouse fridge and talk into it like a phone.

Nearby is a table where parents can find complimentary snacks like Cheerios, crackers, cheese, and cucumber slices sitting on coffee filters that serve as makeshift plates. What would an immersive experience that centered free engagement and play, rather than structure founded on capitalist enterprise, look like?

It’s now January, and World of Barbie closed this weekend.

In the time since I visited it, I’ve had the chance to consider what strikes me now: the impatient parent, the influencer. But then I also recall the girls and boys that ran freely back and forth across the courtyard astroturf — my daughter included, albeit clutching the courtyard bench for support. I saw cartwheels and summersaults and infectious laughter.

We all knew this was astroturf, and Barbie was a fantasy.

World of Barbie is scheduled to tour the United States in 2023. Check the website for details.