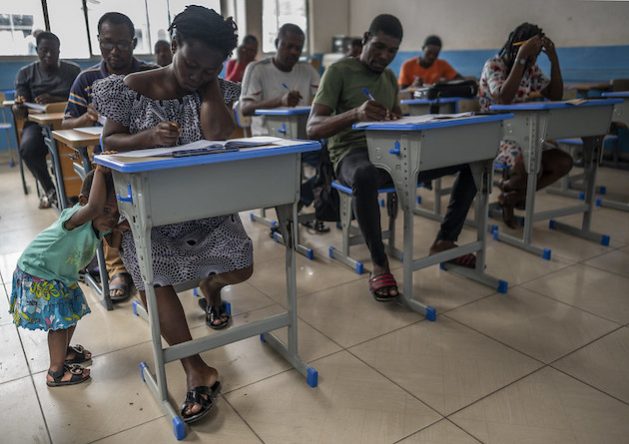 JOHANNESBURG, Jan 06 (IPS) – Many Ghanian Members of Parliament (MPs) champion adolescent reproductive health rights to stop the practice of child marriage, which is prevalent in some areas of the country even though the country’s Constitution and Children’s Act outlaw it, Dr Rashid Pelpuo (MP) told IPS in an exclusive interview.

Pelpuo, who is President of the African Parliamentarians Forum on Population and Development, also said it had become “normal practice” for MPs to work to support youth and “lead discussions on issues of family planning and adolescent reproductive health at youth sensitization programmes.”

He told IPS the Presidents of the Pan African Parliament (PAP) and the African Parliamentarians Forum on Population and Development recognize: “Our shared interest in, commitment to, and existing cooperation on population and development issues such as sexual and reproductive health and rights, including family planning and HIV/AIDS…” This commitment is expected to be signed in a memorandum of understanding in 2023.

Here are excerpts from the interview:

IPS: While Ghana’s Constitution and its Children’s Act both outlaw child marriage, according to a study, 1 in 5 girls get married before age 18 and 1 in 20 before they are 20. These marriages are more common in the northern regions.

How are parliamentarians dealing with these issues?

RP: The issue of child marriage in Ghana is traceable to an age-old tradition of marrying women early ‘before they are spoiled’ – a woman who has ‘known a man’ before marriage was a disgrace to the family that has brought her up. Though this situation no longer exists, the practice of early marriage of women continues, especially in rural Ghana.

Parliamentarians of the Population and Development Caucus and others are strong advocates against this practice both in and outside Parliament.

According to the Ghanaian 1992 Constitution and the Children’s Act, it is unlawful to marry a girl before she’s 18 years of age. In a few cases when such laws are violated by a man who marries before the minimum age or even before the girl has finished her basic education, MPs will normally work with law enforcers to free the girl and help prosecute the culprit.

A good number of MPs have signed on as champions of adolescent reproductive health and rights and are key supporters of family life education. This year alone, MPs have worked with the United Nations Population Fund (UNFPA) in key locations to interact with young people and address their health and education challenges by referrals.

IPS: West Africa’s population accounts for about 30% of Africa’s population. From roughly 367 million people today, it is expected to increase to almost 570 m by 2035. However, the region is yet to benefit from the ‘demographic dividend.’ Many say that a high population of youth is a challenge for the government; there is a high cost of health care, education, and other services and high levels of unemployment. How are parliamentarians working towards policies that may reduce fertility rates, improve education, family planning, etc.?

For example, in November last year, MPs interacted with young people about issues with their reproductive health. Also, at the beginning of December 2022, on the occasion of the birth of the world’s 8 billionth child, MPs held a workshop, with the UNFPA sponsorship, to view the implications of having a global population of 8 billion on Ghana.

After that programme, the MPs pledged to revise their annual advocacy on Ghana’s population growth and concerns to quarterly advocacy through statements on the floor of Parliament. The thrust of MPs’ work in supporting the education and awareness of the youth is in policy advocacy and direct interaction with the youth. It has become normal practice for MPs to lead discussions on family planning and adolescent reproductive health issues at youth sensitization programmes.

A chunk of the programme of the African Parliamentarians Forum, often sponsored by the Asian Population and Development Association (APDA) and the UNFPA, centers on issues of family planning, reproductive health, and universal health. This appears to be a direct response to the high fertility rate of sub-Saharan Africa at 4.6 births per woman (World Bank Report, 2021). Knowing the frequent occurrence of teenage pregnancy and unplanned births throughout the continent, it has become a necessary effort to sink home the need for policy advocacy in these areas for all African countries.

IPS: In Ghana, the maternal mortality rate is shrinking. Figures quoted online are that it is 308 per 100,000. It is much higher in other countries in the region; in Ghana’s neighbor Nigeria, the rate stands at 917/100,000. While both seem to be going down (which is good), they are a long way from the 70/100,000 in the SDG 3 targets. What are parliamentarians working toward to improve this in Ghana? Is there regional cooperation to address this?

RP: Parliamentarians often make policy statements on maternal health directed at the ruling government to address the concern about the unacceptable situation of high maternal deaths in Ghana. Issues on maternal death are paramount in our health policies. Ghana has introduced a Free Maternal Health Care Policy (FMHCP) on which pregnant women register for free health insurance and receive free medical care. Parliamentarians have played an advocacy role in developing this policy and have been reaching out to women who may not be aware of it to help them take advantage of it. The impact has been very positive (and shows) in annual improvements in maternity health.

There has been regional cooperation in discussing and sharing information on Universal Health Care and reproductive health and rights. The African Parliamentarians forum has had a number of meetings and conferences with their counterparts from other regions, especially with the Asian and European Parliamentarians forums that touch on issues on reproductive health and policy sharing. Major cooperation in areas of maternal health is recorded in various international conferences that tackle the problems of high maternal mortality. Such conferences include Partnership for Maternal, Newborn and Child Health (PMNCH), New Delhi, India, in December 2018, and Women Deliver (Africa Parliamentarians), Vancouver, Canada, in June 2019. Such arenas of cooperation give a good comparative understanding of how various countries across regions tackle reproductive health challenges.

IPS: Could you elaborate on APDA’s role in facilitating regional cooperation on the ICPD25 programme of action?

The Asian Population and Development Association (APDA) was established in Japan as a Non-Governmental Organization directed at addressing the challenges posed by issues on population and development. It serves as the Secretariat of the Japan Parliamentarians Federation for Population (JPFP) and directs its focus on the role of the Japanese MPs and their counterparts in Asia, Africa, Arab and other regions. APDA’s research focuses on three main areas, which are gender, health, and social policy issues. Since the establishment of the ICPD 25 as a focus area of intervention, APDA has organized various programmes.

APDA often organizes conferences in Asia, Africa, and the Middle East under ICPD 25 thematic areas. These conferences often bring together various parliamentarians from Asia, Africa, the Americas, and Europe to address critical issues on population and development. Issues such as youth unemployment and other goals of ICPD25 are center stage at the conferences.

Indeed each year, APDA, in collaboration with the UNFPA, organizes annual conferences on ICPD25. In recent times APDA has organized webinars and conferences for regional participation both in June, July and September 2022.

In September 2022, the conference with the theme “The Role of Parliamentarians in Realizing the ICPD25 Commitments” was patronized by Asian and African Parliamentarians.

Another follow-up meeting on ICPD25 Commitments was held in June 2022 in Addis Ababa, Ethiopia. It was supported by UNFPA ESARO and Japan Trust Fund (JTF) with cooperation from the International Planned Parenthood Federation (IPPF). More than 100 participants, including parliamentarians, officers of national committees on population and development, and UN experts, attended.

In effect, APDA has always supported the implementation of the ICPD25 in various ways but mostly through international conferences that ensure regional cooperation and participation.