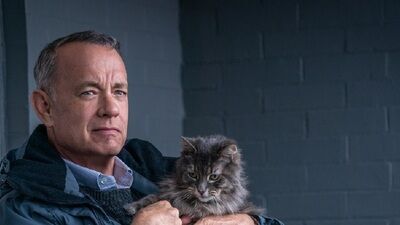 
Then again, not everything is as awful as Otto makes them out to be. And he could perhaps afford to have some manners himself, especially when a new, very pregnant neighbor drops by with a bowl of home-cooked meal as a courtesy.

If you’ve already seen 2015’s Oscar-nominated Swedish hit “A Man Called Ove” by Hannes Holm, a film that is not any better or worse than this middle-of-the-road American remake (yes, not all originals are automatically superior), you’ll know that Otto hasn’t always been this insufferable. In small doses of syrupy and visually overworked flashbacks, Forster and agile screenwriter David Magee show us that he was socially awkward even from his young days, but at least nice and approachable. With a squarely unstylish side-part haircut that aptly gives out a “nice but unworldly guy” vibe, young Otto (played by the star’s own son, Truman Hanks) had an interest in engineering, in figuring out how things work. His life apparently changed when he accidentally met the dreamy Sonya (Rachel Keller), who later on became his wife and passed away recently.

As was the case in “Ove,” Otto can’t wait to join his wife on the other side, but his frequent suicide attempts get interrupted in episodes that are sometimes awkwardly funny, and other times, just plain awkward. The chief interrupters of our get-off-my-lawn guy are the abovementioned new neighbors: the happily married-with-kids couple Marisol (a bubbly and scene-stealing Mariana Treviño, the absolute best thing about the film) and Tommy (Manuel Garcia-Ruflo), who often ask little favors from the grumpy Otto. There are also others in the neighborhood, like a kindly transgender teenager Malcolm (Mack Bayda) thrown out of his house by his dad, the fitness obsessed Jimmy (Cameron Britton), Otto’s old friend Rueben (Peter Lawson Jones) and his wife Anita (Juanita Jennings), who are no longer on cordial terms with Otto. And let’s not forget a stray cat that no one seems to know what to do with for a while.

The mystery is that none of the supporting personalities in this story can take a hint about Otto, at least not well into the film’s second act. Instead, all the characters collectively treat Otto with patience and acceptance, as if he isn’t being willfully rude to them every chance he gets. For example, it’s anyone’s guess why Otto’s work colleagues bother to throw him a retirement party when it will surely go unappreciated or why Marisol continuously insists on trying to bring out the good side of him when Otto offensively shuts down every one of her genuine attempts.